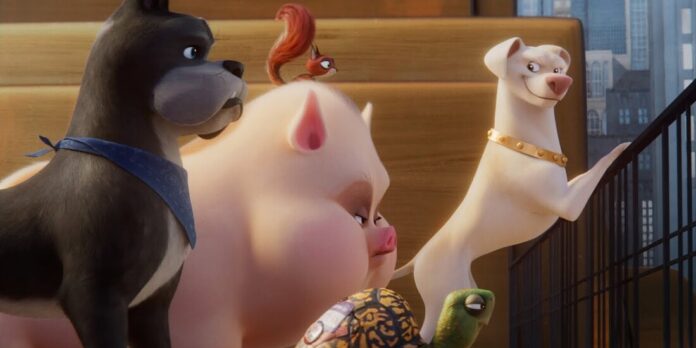 Next Best Picture’s weekly analysis of the box office and what the numbers mean for the industry, films, filmmakers, and the Oscar race is back! This will be a re-occurring post every Monday morning, so stay tuned for more box office information and hopefully more additions to these posts in the future. This weekend, an ensemble of super-powered animals took the reigns at the box office with a not-so-heroic debut.

Warner Brothers’ “DC League Of Super-Pets” flew into number one with a $23 million opening at 4,314 locations. That’s a far cry from the debuts of “Lightyear” ($50.5 million) and “Minions: The Rise Of Gru” ($107 million) earlier this summer. That said, “DC League Of Super-Pets” did open almost identically to Dreamworks’ “The Bad Guys” in its April debut ($23.9 million). Being compared to a modestly-budgeted project tied to an obscure IP is probably not what Warner Brothers was hoping for. Despite boasting the appealing DC canon and a collection of A-list superstars (Dwayne Johnson, Kevin Hart, and Keanu Reeves, to name a few), “DC League Of Super-Pets” opened to a pedestrian figure for a super-powered/animated effort.

I have some theories. It looks like Warner Brothers and Disney learned the same harsh lesson this summer – don’t mess with the “Minions: The Rise Of Gru,” earning $10.8 million in its 5th weekend, posed an additional hurdle for “DC League Of Super-Pets” to leap over as family market competition. Gru’s meager 40% drop this weekend shows that minion business did not dampen when faced with direct competition. A little more distance from one of the summer’s most notable titles probably would have helped “DC League Of Super-Pets” and “Lightyear” alike (the Pixar “Toy Story” spin-off tapped out with a disastrous $117 million domestically on a $200 million budget). I also don’t think the fanfare for a DC Super-Pets film was ever that high. Warner Brothers intelligently filled TV ads with soaring superheroes and colorful gags. Still, the project’s focus on Krypto and his rag-tag group of friends lacks the same marketability as a typical live-action superhero vehicle. Having the voices of superstars like Dwayne Johnson and Kevin Hart is a nice luxury – it just does not carry the same weight as featuring them in on-camera roles (the two earned a $35 million opening for a non-IP project like “Central Intelligence” back in 2016).

It’s not all doom and gloom for “DC League Of Super-Pets.” We just witnessed “The Bad Guys” crawl to $96.7 million domestically/$245.6 worldwide totals on an identical opening, while the depleted August calendar leaves room for a leggy run. Still, “DC League Of Super-Pets” is looking lukewarm at best for a $90 million production. I don’t think Warner Brothers is panicking here, although I don’t expect them to be greenlighting a big-screen sequel anytime soon.

The extraterrestrial Jordan Peele effort “Nope” beamed into second place with an $18.5 million gross. A 58% decline from last weekend’s $44.3 million opener is similar to Us (53% drop off) and a ways off from “Get Out’s” unrealistic standard (a jaw-dropping 15% decline from its opening). “Nope” is one of the few movies causing some division over its box office prospects. The film fell slightly below the $50 million pre-release tracking set for its opening and remains a divisive play for audiences (a substandard B on CinemaScore).

That said, an $80.6 million gross so far on a $68 million budget is nothing to scoff at for an auteur-driven film. It will be essential to keep an eye on the film’s international performance in the future, which will likely determine if this breaks even or earns a net positive. A slow August should allow “Nope” to gain some momentum domestically. I expect a final domestic gross in the $125-140 million range as long as it maintains steady declines. Universal should remain invested in the Jordan Peele moviemaking business going forward. I will be very interested to see what the scale of his next project ends up being. He could further embrace the grander scale of tentpole projects or return to the small-to-mid budget features he initially broke out with (“Us” cost $20 million and “Get Out” an economical $4 million).

The rest of the top ten featured steady holds for counter-programing features. “Where The Crawdads Sing” ($7.5 million on a 27% decline from last week) and “Elvis” ($5.8 million on a stunning 11% drop) remain enticing avenues for female and adult moviegoers alike. Both are strong success stories for a Hollywood marketplace that expected mid-budget features to sink into irrelevance. The blockbuster allures of “Thor: Love And Thunder” ($13.1 million this weekend/$301.5 million domestic total) and “Top Gun: Maverick” (an $8.2 million weekend/an unprecedented $650.1 million domestic total) also remain consistent financial draws.

The B.J Novack crime-comedy hybrid “Vengeance” leads the specialty market with a $1.75 million debut in 998 theaters. Focus Feature is carving a much-needed role in the Hollywood marketplace with offbeat yet mainstream-leaning films for niche audiences (“Mrs. Harris Goes To Paris” debuted with $1.9 million in 980 theaters). Whether “Vengeance” holds up well or not, this debut is a small victory for the distributor’s release platform.

Elsewhere, “Marcel The Shell With Shoes On” is losing momentum with $602,300 in 821 theaters (a 31% decline from last weekend’s expansion). The glowing internet buzz and strong reviews for A24’s latest feature are not translating to a nationwide breakout here. However, $4.1 million over six weeks remains commendable for a property with YouTube origins. Also, in other A24 news, while it did not crack the top 10, the studio did re-release “Everything Everywhere All At Once” in theaters this weekend and celebrated as the original high-concept action, sci-fi film became their first film to cross $100 million at the worldwide box office.

Next weekend brings some blockbuster excitement with “Bullet Train.” I expect this Sony feature’s mass advertisement push and an appealing action-comedy concept to garner a $34-$42 million debut. The studio comedy “Happy Easter” also debuts – and with relatively modest expectations. An opening in the $4-$7 million range seems likely.