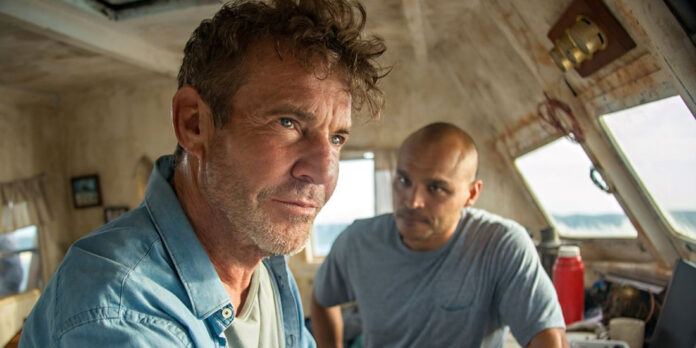 THE STORY – To save their cash-strapped orphanage, a guardian and his kids partner with a washed-up boat captain for a chance to win a lucrative fishing competition.

​There’s a line in “Blue Miracle” that says “fishing is very hit and miss.” Movies are like that, too. Sometimes you get movies that hit it so out of the park that you’re left breathless and speechless after watching them. Other times, a movie will be so bad that you wonder how it was ever made.

Writer and director Julio Quintana’s film isn’t the latter by any means, but it’s also not the former. It’s a film where once you learn the conflict the characters have to face, it’s pretty easy to figure out how they might triumph in the end. And for this group to save their orphanage, they have to put all their trust into a cranky fisherman played by none other than Dennis Quaid.

“Blue Miracle” is based on the true story of Casa Hogar, a Mexican boys orphanage that enters the Bisbee’s Black and Blue Tournament – the fishing tournament to end all others. Omar (Jimmy Gonzales) runs the orphanage with his wife Becca (Fernanda Urrejolaand). They’ve recently run into financial troubles, and it doesn’t help that Hurricane Odile hit the home in 2014. The bank keeps calling, looking for the $117,000 that Omar owes, and he just isn’t sure how to find the money in 30 days. If he can’t find the cash, the orphanage will be taken from them, and the many young men living there will have to return to the streets, something Omar promised would never happen to them. Even if some boys refuse to join the big family, such as Moco (Miguel Angel Garcia), a boy always up to some trouble, Omar treats each one like his own.

Captain Wade Malloy (Quaid), a two-time champion of the Bisbee’s Black and Blue Tournament, has returned to take home the title for the third year. New rules, however, don’t allow him to enter unless he joins a local team. In comes Casa Hogar, and soon Wade, Omar, and a few boys from the orphanage set sail, hoping to reel in the biggest fish during the three-day tournament. Omar sees this as an opportunity to save the orphanage. The only problem is not a single one of the boys has ever fished. What could possibly go wrong?

It’s the underdog story we’ve seen several times before, only this time it’s based on a true story, which makes the film much more inspiring. The fight to save Casa Hogar is seen anytime someone tries to reel in a fish (or what appears to be one from far away): all their strength and energy goes into it, knowing just how much is riding on the competition. True stories like this show you that miracles aren’t just things that happen in movies.

However, that doesn’t mean the script is revolutionary. It’s a very formulaic film that tells you exactly how it’s going to end after you’ve seen about 30 minutes of it. And despite having so many young men who’ve either been abandoned by their families or lost loved ones, the movie barely focuses on any of their emotions. Its short 95-minute runtime doesn’t allow for much insight into what Casa Hogar means to these boys or what potentially losing it could do for them, and that seems like a missed opportunity. If they’re spending nine hours out at sea for three days, you’d think audiences would get a chance to hear from the boys what Casa Hogar, Papa Omar, and Becca have done for them and to explore stories from their past. It could have led to a more emotional story and would have impacted audiences a bit more. The ending is still exciting and touching, but it’s just missing some compelling moments to lead into it.

One aspect that really stands out is the vibrancy of colors in this film. Whether it’s the blue of the water, colorful light filling a room through stained glass windows, or just simply capturing the landscape, colors pop and make you long for the tropical Cabo San Lucas, Mexico, setting. As is expected, blue is the primary color in “Blue Miracle,” and cinematographer Santiago Benet Mari knows how to showcase every shade to its full potential.

From a casting standpoint, each of the boys was perfectly selected. They all bring life to their respective characters and let their personalities shine. Nathan Arenas, as Hollywood, is a standout who will make anyone smile when he’s up on the screen. Gonzales as Omar is always a warm presence as he fills the paternal role for the boys, while Quaid seems like he’s having fun as the miserable, grumpy fisherman Wade. Everyone is delightful to watch.

“Blue Miracle” is a film that the whole family will easily be able to enjoy due to the fun cast and truly inspiring story. There are some misses with the script, but, hey, sometimes you can’t reel in all the winners.