“MONA LISA AND THE BLOOD MOON” 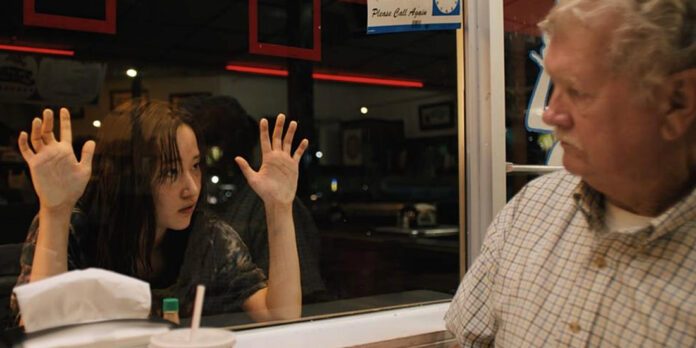 THE STORY – Follows a girl with unusual and dangerous powers who escapes from a mental asylum and tries to make it on her own in New Orleans. With exciting sequences set to thrilling music including Italian Techno and Heavy Metal, this fantasy-adventure film is sure to invoke memories of the 1980s and 1990s.
​
THE CAST – Jeon Jong-seo, Kate Hudson, Craig Robinson, Evan Whitten & Ed Skrein​

​​​​What a title! I know you’re not supposed to judge a book by its cover, but when I saw the words “Mona Lisa and the Blood Moon” in the Venice Film Festival program, I knew I had to see it. The fact that it’s directed by Ana Lily Amirpour, who made an impressive feature debut with the moody “A Girl Walks Home Alone at Night” only made me even more intrigued. And while it’s undoubtedly a wacky time, this movie turned out to be exactly what I thought it would be: fun, trashy, and incredibly hollow.

The titular Mona (Jeon Jong-seo) is a young woman who escapes a mental asylum thanks to some handy telekinetic powers. She seemingly can make other people do whatever she wants using her mind. All the while, her victims are fully aware of what their bodies are doing but are wholly unable to control themselves. She eventually teams up with Bonnie (Kate Hudson), a stripper with a young son named Charlie (Evan Whitten). Bonnie sees financial potential in Mona’s abilities, and the unlikely pair charge through New Orleans with seemingly nothing or nobody able to stop them.

If that sounds like the kind of off-kilter good time at the movies that appeals to you, odds are you’re going to enjoy this film. It’s a sleazy look into the underbelly of New Orleans, populated by characters just trying to make it to the end of the day, no matter what it takes. And even when they do objectively immoral things, it’s hard not to find them sympathetic thanks to their circumstances and pure charm. Amirpour never looks down upon her characters for what they’re forced to do to get by, and her non-judgmental camera gives the audience permission to relax and enjoy the ride.

It helps that the performances bringing these characters to life are engaging and full of life. Jeon, who impressed in 2018’s “Burning,” is smartly a mostly observational character. She’s mystified by the world around her, and the actress effectively portrays the innocence that masks the dark powers she holds inside. She’s like a mash-up of the titular character from “Carrie” and Ariel from “The Little Mermaid.” Hudson is a hoot as Bonnie and clearly had a fun time playing this role. It’s the kind of couldn’t-care-less character with nothing to lose that’s always a treat to watch an actor sink their teeth into. She knows precisely what type of movie she’s in as she also makes the strange choice to have a thick accent that sounds distinctly New York-based, despite her character never mentioning living in or being from there. It’s a bizarre but fascinating choice which only adds to her off-kilter nature.

While it’s a perversely enjoyable film, it ultimately doesn’t really have much of anything to say about the real world. This isn’t a problem per se, as the film is decidedly hedonistic in nature, but it does make the whole endeavor feel a bit hollow. I suppose one could say the film comments on how women are often forced to work harder for things that society grants to men readily. Still, given the general feel of the film and how it portrays the world its characters inhabit, I think this would be a stretch. One piece of simplified storytelling I appreciated was the fact that Mona’s psychic abilities are never explained. Too many films with fantastical elements trip over themselves to reveal the origins of their otherworldly aspects. This one is sure of itself enough to know that such explanations would only complicate the simple, subtext-free story being told. Amirpour’s nihilistic cinematic eye is put to effective use in “Mona Lisa and the Blood Moon.” It’s a simple, transparent adventure filled with the kinds of people our parents warned us about.