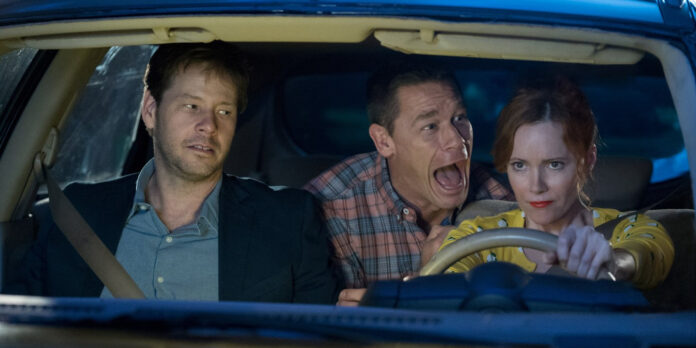 THE STORY – Julie, Kayla and Sam are three high school seniors who make a pact to lose their virginity on prom night. Lisa, Mitchell and Hunter are three overprotective parents who flip out when they find out about their daughters’ plans. They soon join forces for a wild and chaotic quest to stop the girls from sealing the deal — no matter what the cost.
​
THE CAST – Leslie Mann, Ike Barinholtz, John Cena, Kathryn Newton, Geraldine Viswanathan & Gideon Adlon

​​​The female-directed and heavily sex-positive “Blockers,” is an uncommon twist to the teenage sex comedy genre. Filled with insane gag laughs on the crude nature of its premise, it carries its weight with deserved sentimentality toward the end. Three high school seniors take on the whim of losing their virginities on prom night. When their parents happen to find out, they intend to do all they can to stop this from happening. They think they are justifiably protecting their little girls and steering them away from making life-ruining decisions; all in good nature, but very much overstepping. The film progressively eliminates the sense that young women are not these damsels in distress who are coerced into “losing their innocence.” Hearing all the buzz about the film at SXSW, it’s now safe to say that “Blockers” is leading the way for successfully articulate big studio comedies in the way “Game Night” succeeded earlier this year.

You may have picked up on director Kay Cannon’s name among the writers behind the Emmy-nominated series, “30 Rock.” Cannon also wrote the screenplay for the successful “Pitch Perfect.” This being her first directorial project offered, she steers it in a way that’s emotionally funny to the audience, never shying to show what it usually means to feel young and to have complete and total agency of one’s own body and life. Young women are so diverse and “Blockers” has a trio of strong leads to exemplify that onscreen. Kathryn Newton is Julie, a UCLA-bound senior in a considerably long term relationship, ready to have her moment with not even the smallest of doubt in her life. Geraldine Viswanathan is Kayla, unapologetically herself and in on the pact, intent on getting things over and done with before heading to college. Gideon Adlon is Sam, a more socially reserved person just trying to share the experience with her two best friends while figuring out her own identity.

The parent actors shine just as bright as the younger cast. Leslie Mann, Ike Barinholtz, and John Cena have a remarkable chemistry that let the jokes breathe and effortlessly makes way for things like butt-chugging. Cena’s absurd turn as Kayla’s overprotective father takes a deeper meaning as, like his character, he’s willing to do anything. Mann is stellar as always, taking her role as Julie’s mom very earnestly. It’s evident by her ‘JEWELS-MOM’ license plate, her will to protect her daughter from the world touches on her need to have her always close by. Barinholtz is how you would expect him, except his character arc is somewhat earned and believe it or not, he’s the one talking sense to the other two parents while trying to repair years of absence with his daughter, Sam. From flipped cars to intensely looney scenarios, the will of these characters bring the whole thing home.

Although “Blockers” is heavy on the laughs, it does take a little while for the antics and the heart to get established. These parents are just trying to do what they believe parents do, but it sometimes comes off too cartoonish to let pass. There’s an underdeveloped subplot for Sam that could’ve been given more thought as with the other stories. That being said, the film more than delivers as a progressive whole, always paying attention to the reasons why the parents do these things. It opens up a conversation on familial bonds, double standards, and all through the universal language of laughter. It’s a comedy of the newer ages. It knows it has something to say and it’s not afraid to go through wild obstacles for that payoff. There’s a certain experience that’s judged differently for males and females and this film is adequately shaped to show how women can take charge of that moment.

“Blockers” has the underage drinking, the use of drugs, and yes, the sexual theme going. Sounds a lot like “Superbad,” right? Well, here Cannon decides to take a script written by Brian Kehoe and Jim Kehoe and give it the right nudge of influence that blossoms into a relevant, funny, and genuine female independence. After all, this is a film about three young women vowing to have sex on prom night, a night so glamorously shown to be a milestone in the teenage life. It only makes sense to slide the director’s chair to a woman; a project choice that should lead the way for other females to helm big studio films like this. Here we have ourselves a comedy hit that packs the belly laughs and is socially aware of its leading roles and the stories they have to tell. Kay Cannon achieves a connectivity through the film that only makes the laughs more genuine.