Best Adapted Screenplay Is This Year’s Most Competitive Oscar Category 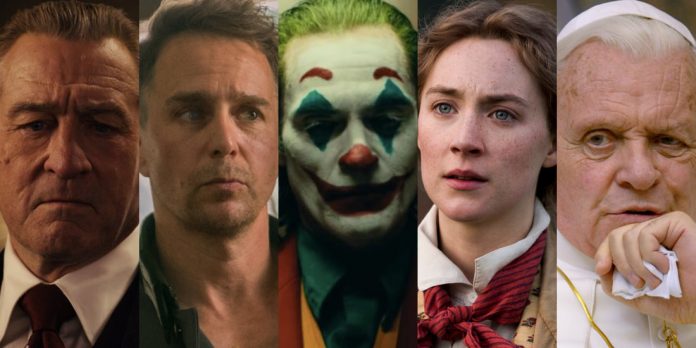 By Ryan C. Showers
​
This awards season is flying by. We’re at about the halfway point between Oscar nominations being announced and the ceremony where the winners are named. So, where do we stand? Renée Zellweger, Joaquin Phoenix, Laura Dern, and Brad Pitt are creating a 2017-style five-award sweep in the acting races; Sam Mendes is pulling ahead in Best Director having the technical achievement; Quentin Tarantino has been outpacing Noah Baumbach’s “Marriage Story” for yet another Best Original Screenplay win for “Once Upon a Time in Hollywood;” and Best Picture is taking form with “1917” as a late-breaking sleeper hit with a mild challenge from SAG-winning “Parasite.” However, the outcome of Best Adapted Screenplay remains a mystery. In fact, it’s the most fluid, competitive, above-the-line category this year, by far.

It may not be the sexiest category to get excited about, but there’s real uncertainty as to which film will ultimately win Best Adapted Screenplay. The Writers Guild Awards and the BAFTA awards won’t name their selections for Best Adapted Screenplay until the first week of February. Until then, there’s enough room to call this a loose three-way race, or at least a strong two-way race.

Of the five nominees, the screenplay least likely to prevail is “Joker.” You can essentially set this one aside. Or can you? The Academy loved proving a point in the box office sensation, Best Actor-winning “Bohemian Rhapsody” last year, voting for it in four out of five categories for which it was nominated. The parallels between “Bohemian Rhapsody” and “Joker” are too eerie to even fully digest. I think it’s safe to compartmentalize “Joker” as the last one to cross the finish line. For all the complementary aspects of the controversial film, the writing is especially light.

The next contender in the Best Adapted Screenplay category that probably has the least likely chance to win is “The Two Popes.” If you’ve ignored awards season news since the Telluride Film Festival, and are just now checking back in, you would probably expect this film to be running ahead in this category. After premiering at that prestigious festival in September, where it claimed praise as high as “the best screenplay of the year” by some pundits, “The Two Popes” never really landed in practice. Until nomination morning, there was a possibility that Jonathan Pryce and Anthony Hopkins wouldn’t be nominated in the acting categories. The buzz has never sustained a constant presence, which is demonstrated in the film’s lack of a Best Picture nomination – the only film in the category to have that (dis)honor. There’s a world where Anthony McCarten pulls off a surprise win, but that world is highly unlikely.

Of the five films nominated in Best Adapted Screenplay, “The Irishman” demonstrated the widest reach of support within the Academy, having received ten nominations. “The Irishman” is only one of four films nominated in the category that is also competing to win Best Picture, which is to its benefit. It’s an easily accessible (for viewing on Netlfix), Martin Scorsese-Robert De Niro-Al Pacino prestige picture, with screenwriter, Steven Zaillian, improving upon the source material, “I Heard You Paint Houses.” The Oscar winner for “Schindler’s List,” another three-hour epic with a legacy director, probably deserves another trophy for his career and skill.

There’s a lot to admire about his script for “The Irishman”: It’s dramatically potent, structurally sound, and even credibly funny, in addition to having immaculate depth in its character work. But “admire” is the keyword. As much as I love “The Irishman,” its muted buzz shows people haven’t connected to the film as much as the glowing reviews indicate. It failed to win the Golden Globe for Best Drama (which should’ve been an easy win) and its presence isn’t really felt despite its high-nomination count. If the film’s buzz was more alive, Best Adapted Screenplay would be an easier category for “The Irishman” to win. There’s a real chance it wins, but there are two other films in this category that have real traction to win.

​The winner of Best Adapted Screenplay is likely going to come down to “Jojo Rabbit” and “Little Women.” Both films are in similar positions: The claim to fame of each film is the wildly creative writing, with both films receiving exactly the same amount of nominations; neither Greta Gerwig nor Taika Waititi were nominated for Best Director; both films were solely written by the previously mentioned director, making each film a unified auteur vision; and both Gerwig and Waititi are both actor-turned-filmmakers, so they each have a celebrity factor which gives them an extra element of association with the voters. From my perspective, this race between Gerwig and Waititi is too close for comfort. Even if WGA and BAFTA weigh in with the same screenplay winner, I wouldn’t trust that it would correlate necessarily. Full disclosure: My prediction is a split, with “Jojo Rabbit” winning the WGA and “Little Women” claiming the BAFTA.

Waititi and Gerwig do have individual differences which will contribute to their overall campaign for Best Adapted Screenplay. “Jojo Rabbit” has the more obvious writing with audience-friendly humor and overt satire. It’s the type of screenplay that’s designed to win an award. Being nominated at the Directors Guild Awards gave Waititi a leg up over Gerwig, in addition to having a memorable acting role in his own film (Gerwig has no on-screen presence in “Little Women.”) On the flip side, Gerwig’s adaptation of Louisa May Alcott’s “Little Women” is the most revolutionary screen iteration thus far. Gerwig completely reconstructs the linear timeline presented in the novel and other film versions and successfully does so for a thematic purpose. She creates lyrical dialogue, manufactures a meta-commentary on Alcott’s process of publishing the novel, and makes the 19th-century work feel as though it was written for the modern-day in its messaging.

“Little Women” is more recently seen and has a more urgent buzz to it than “Jojo Rabbit” does, as well as an exorbitant amount of box office cash, again, unlike the modest “Jojo Rabbit”’s earnings. The only televised precursor to announcing a Best Adapted Screenplay winner thus far has been the Critics’ Choice Awards (which typically aligns with Oscar winners up and down the ballot), and Gerwig’s “Little Women” prevailed, which is undoubtedly a good sign for its future at WGA, BAFTA, and the Oscars. And even though Waititi has a level of celebrity to his overall media persona, Gerwig was more well known as an actress before transitioning to writing and directing. Frankly, her star power shines brighter than Waititi. There has been so much attention around one of the five women to ever be nominated for Best Director for the past two years, after “Lady Bird,” that Gerwig probably holds as much name recognition with the average moviegoer or news consumer as Tarantino or Scorsese. Since there’s an all-male Best Director lineup at the Oscars this year, the Academy may feel an extra incentive to give her the edge in this race.

As much as I want to call this race a “Little Women” victory for Gerwig, I’m skeptical. For every reason I’ve laid out above on how Gerwig could overtake Waititi in this race, I can’t shake the feeling that “Jojo Rabbit” leaps off the page as the type of film that the Academy would like as Best Adapted Screenplay winner. Formally, as of now, I’m predicting Gerwig to win for her adaptation of “Little Women,” even though I remain skeptical, with one eye on Waititi for “Jojo Rabbit,” or Zaillian for “The Irishman.”

As an aside, it’s a complete disgrace that Lorene Scafaria’s screenplay for “Hustlers” was completely forgotten for the entire awards season. The social commentary on the financial crisis, its Marxist analysis of American culture, and the roaring character development and relationships deserved to be nominated for Best Adapted Screenplay.

Who do you think is winning the Oscar for Best Adapted Screenplay? Check out our latest predictions and let us know your thoughts in the comments section below or on our Twitter account.