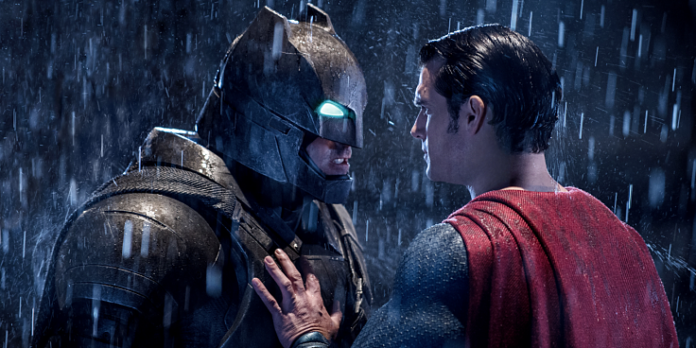 THE STORY – It’s been nearly two years since Superman’s (Henry Cavill) colossal battle with Zod (Michael Shannon) devastated the city of Metropolis. The loss of life and collateral damage left many feeling angry and helpless, including crime-fighting billionaire Bruce Wayne (Ben Affleck). Convinced that Superman is now a threat to humanity, Batman embarks on a personal vendetta to end his reign on Earth, while the conniving Lex Luthor (Jesse Eisenberg) launches his own crusade against the Man of Steel.

It’s finally here. The epic clash between two of the greatest superheroes to come from DC Comics has finally hit the big screen. And as a Batman film, director Zack Snyder does a fairly decent job. As a Superman film, it’s about as good as “Man Of Steel.” But as an overall film that is trying to cram both of these stories together while also setting up the inevitable “Justice League” film, “Batman V Superman: Dawn Of Justice” fails due to too many subplots, plot lines which make little to no sense and an all around feeling of selfishness coming from Warner Bros. and DC Studio’s desire to want to catch up with Marvel Studio’s success as quickly as possible.

Taking place right after “Man Of Steel,” Superman (Henry Cavill) has announced himself to the world as its savior and is doing the best that he can to protect the people of Earth. However, not all see him as the hero that he wants to be. Bruce Wayne (Aka. Batman, played here by Ben Affleck) sees him as a destructive force who has inadvertently killed thousands after his clash with General Zod. Lex Luthor (Jesse Eisenberg) also shares this belief and develops a master plan which involves Batman and framing Superman for the death of people in Africa. Lois Lane (Amy Adams) is investigating the conspiracy in an attempt to help the man she loves, in hopes that the people of the world will recognize Superman as the hero it needs. However, Luthor’s plan is one step ahead of the heroes, which will inevitably cause the two larger than life figures to do battle with each other over their ideologies.

“Batman V Superman: Dawn Of Justice” is long (2 and a half hours) because it not only has to serve as a direct sequel to “Man Of Steel” but it also has to introduce us to Ben Affleck’s take on Bruce Wayne/Batman. It’s essentially two films in one, instead of being patient and giving Ben Affleck a solo film to set up his character first (And after seeing his take on the caped crusader in this film, he absolutely deserves it). This would’ve allowed the audience to focus their attention on the story more, for the ideas that writers Chris Terrio and David S. Goyer present for both Superman and Batman are intriguing. However, it’s Zack Snyder’s handling of the material that results in the giant bore-fest that is this blatant cash grab for the studio instead of a labor of love.

Zack Snyder has always been a director who is more flash than substance. His visuals are always the highlight of his movies and in “Batman V Superman: Dawn Of Justice” they finally fail him. His desaturated and highly contrasted look of the film may fit for his vision of the Batman character but does not work for the tone of the Superman character. His consistent use of slow motion to elicit emotion from the viewer such as in the opening credits and final act also serves as a crutch and highlights his flaws as a director. Not even the ever reliable Hans Zimmer and Junkie XL can use their score on this film to pull the audience back in from Snyder’s missteps as the music fails to create iconic themes for Batman and Wonder Women (The Superman theme which Hans Zimmer created for “Man Of Steel” still works though). The score is a lot like Snyder’s direction, lots of banging with unmemorable moments and only glimmers of brilliance.

As a result of overloaded writing and unsubtle direction, the acting is also extremely hit or miss from this largely impressive list of actors who have been brought together for this mammoth film. As stated before, Ben Affleck shines the brightest in this film as his take on the character begs for its own standalone film (Perhaps as a prequel so we can fill in the gaps?). Jeremy Irons is fine as Alfred and he shares a warm chemistry with Affleck, but the two don’t have enough time on screen together to make much of an impact. Jesse Eisenberg’s Lex Luthor is going to be the most polarizing aspect of this film (Aside from Snyder’s direction), as he is not so much brilliant and ego driven, as he is mentally deranged. His tics and mannerisms come off more comical though as if he was channeling his inner Jim Carrey than being the more menacing genius we not only expected but have also seen him play before delightfully in films such as “The Social Network.” Amy Adams once again feels like she is shoehorned into this film as her Africa side plot conspiracy to defraud the allegations made against Superman is confusing and doesn’t tie into the narrative as well as one might have hoped. Henry Cavill comes off more wooden here than he did in “Man Of Steel” and a lot of that could be attributed to the film’s overall focus not centering on his character and performance. While this film is serving as a sequel to “Man Of Steel,” its biggest mistake is dividing up the narrative to focus more so on the “Justice League” set up than on the god-like superhero whose themes and ideas presented here are indeed captivating, yet not fully fleshed out. And that leaves us with Gal Gadot’s Wonder Women. While she certainly looks the part and gets to show off what her character’s powers can do in the final act, her character receives the least amount of development which is being saved for her own standalone feature. And that’s the fundamental flaw in “Batman V Superman: Dawn Of Justice.” It’s too much movie, for one movie.

It’s clear that Zack Snyder did not respond to the criticisms which were thrown at him after the release of “Man Of Steel.” The only error which was directly addressed and tied into the narrative within this bloated sequel was the destruction of Metropolis at the end of “Man Of Steel,” and how Superman’s actions (While well intentioned) ultimately had everyone questioning his existence among us. It serves as a perfect metaphor for the film. It’s destructive, loud, too big for us to handle and we are left questioning its existence as a sign of things to come. While the film’s intentions may be for the greater good, the studio’s greed to rush into an expanded comic book universe does not do this film series justice. In fact, it’s unjustifiable.