“HELLO, MY NAME IS DORIS” 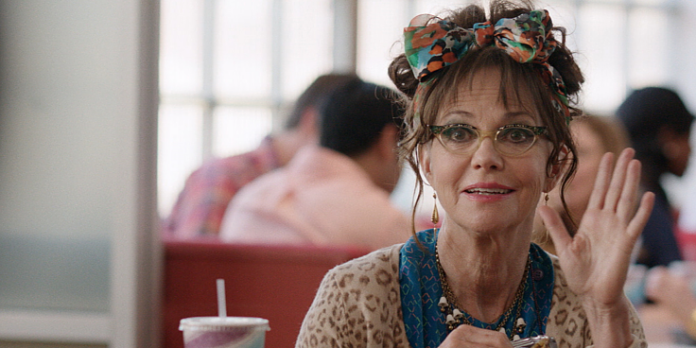 Sally Field gives one of the best performances of her career in “Hello, My Name Is Doris.” She is the reason to see this little sweet and insightful film of an older woman who is trying to live her life a few years too late. Though not the most groundbreaking nor memorable film of the year, it still manages to win us over with its comedic set-ups, heartbreaking pay off and a poignant message that says “There are seven days in a week and someday isn’t one of them.”

​Doris Miller (Sally Field) is an older woman living in Staten Island New York in her now deceased mother’s house, which is completely filled with useless junk that has been acquired throughout many years. She dresses in colorful clothing, is socially awkward in the sort of non-hip grandma way that you would expect from an older generation working in a young person’s world. And that is exactly where Doris has been for decades: taking the ferry from Staten Island to Manhattan every day, working at the same fashion company as an accountant, all the while taking care of her sick mother. She has missed out on many years of her life, but that all changes when a new art director joins the company by the name of John (Max Greenfield). Doris fantasizes about being with the much younger, handsome and charismatic John, knowing full well that their age difference is certainly a glaring issue. But despite that little hiccup, Doris manages to befriend her co-worker and embarks on a journey of self-discovery which embraces the popular phrase “There’s no time like the present.”

As stated before, Sally Field gives a heartbreaking and painstakingly funny performance as the off-kilter Doris. She is just as quirky and socially awkward as you could possibly imagine, but in a loveable way that makes her an easy character to root for due to the humanity which Field imbues in her. Despite her old age, Doris is still young at heart. She has a deep girly crush for Josh, which manifests itself into several fantasy sequences that manage to fake out the audience with hysterical results. Sally Field makes us believe every moment with various facial expressions that express fear, panic, awkwardness, sincerity, longing, sadness, and desperation. She’s emotionally unstable because she’s coming to grips with a life she feels is wasted now that her mother is gone. It’s a multi-layered performance that (at the very least) should land her a Golden Globe nomination for Best Actress in a Comedy/Musical.

It’s very refreshing to see the whole “they’re just not that into you” angle of romantic comedies from the female perspective. This film attempts to subvert audience expectations as much as Doris’s expectations are adjusted following her daydream fantasies. Writer/director Michael Showalter has a screenplay that explores its main character psyche extremely well but his directorial decisions leave much to be desired. There are a number of editing transitions that feel too quick and out of place. There is also a subplot where Doris and John attend a concert by “Baby Goya and the Nuclear Winters” and the sound mixing in this particular scene does not sound accurate compared to other countless movies that have had scenes like this. There are also a few visual moments where Showalter is being a little too on the nose with how “indie” he wants his film to look and feel that can be slightly distracting.

Despite, these flaws “Hello, My Name Is Doris” is an enjoyable film with a winning performance from Sally Field that represents a milestone for her in the later stages of her acting career. She is the reason for admission and she does not disappoint in getting you to instantly fall in love with her character. If you’re looking for an easy going experience at the theater with a life-affirming message and a strongly anchored performance, then respond kindly and say hello back to “Hello, My Name Is Doris.”