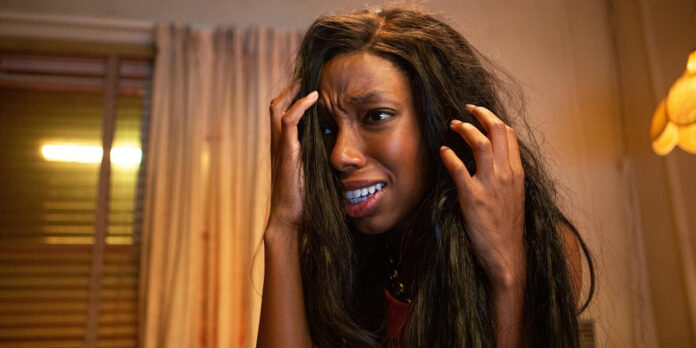 THE STORY – Terror strikes when a woman’s new hair weave seems to take on a life of its own.

Coming off of his successful debut “Dear White People,” Justin Simien’s newest feature, “Bad Hair,” is a horror-comedy in the vein of “The Evil Dead” (1981) and “Us” (2019). A mix of ‘80s B-movie charm and modern social commentary, the film tells the story of Anna (Elle Lorraine), a woman on the verge of self-discovery, who also happens to be battling a killer weave. Literally.

The film begins with Anna going through a traumatic incident involving her hair as a child. Since then, she’s been doing her own hair. Now it’s 1989, and Anna doesn’t know where life is taking her. Her relationship is crumbling, and no matter how hard she tries, she can’t seem to rise from the background of her media job at Culture – a TV network catering to Black Americans. When the company begins to go through transfers and reorganization, Zora (Vanessa Williams) – a light-skinned, weave wearing former supermodel – takes over as Anna’s higher up. She takes Anna under her wing and suggests it’s the younger woman’s hairstyle that’s holding her back.

Following Zora’s gaslighting recommendation, Anna goes to a salon where she gets a weave that’s currently all the rage. In a grueling sequence, we watch as blood bubbles up from her scalp, threads of hair sewn in so tight they look like Anna will never be free of them. When she goes to work the next day, she’s met with looks of awe and intrigue. The new ‘do comes with a price, though. As we soon find out, Anna’s new hair has a thirst it cannot quench.

A neon-lit fever dream, “Bad Hair” looks fantastic: vibrant colors found in the production and costume design, sleek hairdos, and great cinematography. Unfortunately, though, this, and a great lead performance from Lorraine, aren’t enough to save the film from its woes. While the premise is intriguing, what the film accomplishes could have easily been done in a short film. The runtime drags on as we wait for Anna’s “bad hair” to play a part in the film, and once it does, there’s not much else to the story. While it tries to ask the viewer questions about Black femininity in the vein of a Monkeypaw production, the film is nowhere near as smart as it thinks it is. It’s not hard to display the pain Black women go through to achieve eurocentric beauty standards, but the film fails at actually showing us this rather than just telling the audience.

Simien tries to summon some Raimi-eque fun, but it doesn’t translate in “Bad Hair.” The film doesn’t go full camp until it’s too late, and the horror aspects it displays earlier later feel diminished by the comedy that takes over. The final showdown between Anna and this spirited-infused hair is filled with cheap jokes and bad acting that make for an eye-rolling ending. Even Lorraine herself can’t save the mess that follows a quite stellar first act. In the end, while the film attempts to be a hair raising horror, it, unfortunately, falls flat. “Bad Hair” fails to tell its viewer anything meaningful as its commentary about colonialism and colorism gets buried under the weight of unfunny and unconvincing comedy.