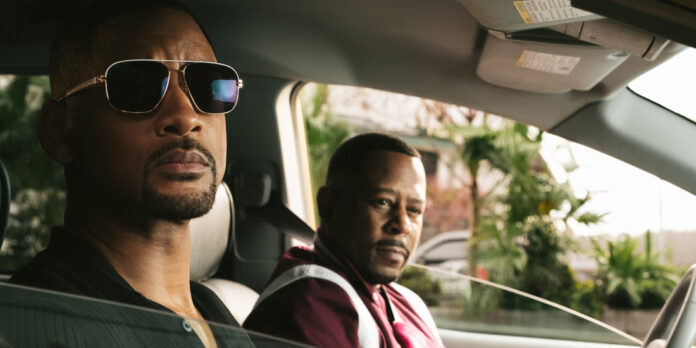 THE STORY – Old-school cops Mike Lowery and Marcus Burnett team up to take down the vicious leader of a Miami drug cartel. Newly created elite team AMMO of the Miami police department along with Mike and Marcus go up against the ruthless Armando Armas.

​​​​​It’s only January and already, we’ve been given the first true genuine surprise of 2020. The “Bad Boys” franchise comprised of two over-the-top action films directed by Michael Bay starring Will Smith and Martin Lawrence in 1995 and 2003. They were both big hits and gave us a phenomenal pairing between Lawrence and Smith. Now, here we are 17 years since the last film and with Lawrence and Smith returning and Michael Bay out of the director’s chair (being replaced by directing duo Adil El Arbi & Bilall Fallah), “Bad Boys For Life” has quietly arrived in theaters making us all wonder…is a third film really necessary in this franchise? The answer is a resounding yes as Arbi and Fallah manage to ground this third entry and inject enormous levels of heart into it, something the two previous films were sorely lacking in place of sophomoric crude humor and illogical action setpieces. Some of that is still retained here, so that “Bad Boys” can feel like a “Bad Boys” movie but this explosive third entry is composed of the good parts of the franchise, not the bad.

Life is changing in Miami for police officers Marcus Burnett (Martin Lawrence) and Mike Lowery (Will Smith). Both are getting older as Marcus has recently just become a grandfather and Mike is having to deal with his best years being more behind him than in front of him. After multiple assassinations are committed on those connected to a case that has personal ties to Lowery, he and Marcus team up with the force’s AMMO division led by an old flame of Mike’s named Rita (Paola Núñez) to hunt down the assassins and bring them to justice. Along their pursuit, startling revelations about Mike’s past are revealed to him that could greatly impact his future.

I knew heading into “Bad Boys For Life” that I would have to stomach some cringe-inducing moments of dialogue and suspend my disbelief for some highly implausible action setpieces. Those are all indeed present, however, they’re not nearly as extreme as “Bad Boys II.” The third entry in the franchise has an unexpected amount of relatability this time around as it attempts to ground Marcus Burnett and Mike Lowery due to the actor’s ages. Lowery especially, can’t be a superhero forever. Riding the slick cars, dressing in fancy colorful suits and continuously putting himself in harm’s way. “Bad Boys For Life” wisely asks us to question the humanity of these two characters and puts the relationship between Marcus and Mike to the test like never before. The result is stronger than expected performances from Smith and Lawrence for this type of material. There are more than a few scenes where Smith especially was tapping into something more highly emotional than the character of Mike Lowery has ever afforded him before. Seeing more layers being given to these characters we already care about was a much welcomed surprise.

While the action set-pieces of “Bad Boys For Life” is nowhere near as bombastic as anything that Michael Bay would’ve brought to the screen, the action is still decently well directed and is keeping in style with what the franchise has given us before. There are even some borrowed camera movements from Bay’s film (one of which features a ridiculously hilarious cameo which I won’t dare spoil here) that feel appropriately used and self-aware. This franchise has never achieved what cinephiles might call “high art.” It never had to. All it had to do was entertain us and it still does. They even managed to bring back old favorites such as Joe Pantoliano’s Captain Howard and Dennis Greene’s Reggie (who fans will remember from a famous scene in “Bad Boys II”), rewarding those who have been with this franchise from the beginning. The new cast members are hit or miss but their interactions with the film’s two leads are always enjoyable and don’t distract too much from what we came to the cinema for in the first place.

The chemistry between Lawrence and Smith is as great as it’s ever been, and as said before, the decision to have them play into their old age, well past their prime was a smart one for making this sequel feel more fresh and not just more of the same. It’s an added bonus that for all of the bullets, explosions, ridiculous plot developments and corny but well-intentioned humor, that “Bad Boys For Life” actually has something meaningful to say. It’s not just another “turn off your brain” dumb fun action movie. When it was over, I was clamoring for a fourth film whereas in the past, I couldn’t care less despite my overall guilty pleasure enjoyment of the franchise. This third entry is easily the best film due to how much it makes us care about these two characters, and not just the stars playing them. Let’s hope a fourth entry doesn’t take another 17 years to find its way to the big screen.