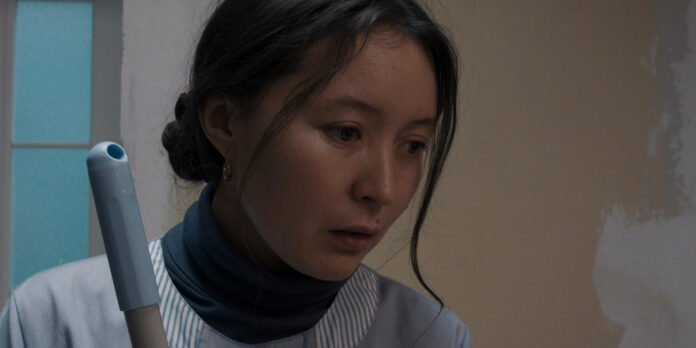 THE STORY – A destitute young woman abandons her newborn in the hospital to comb the Moscow streets to find some way to make money so that she can pay off a vicious loan shark.

​​​​​​On December 17, when the shortlist of nine Foreign-Language Film contenders was announced, eight of the films were familiar titles, given their success on the fall festival circuit. But the ninth had a few Oscar watchers raising their eyebrows. “Ayka” from Kyrgyzstan? What’s that?

Thinking back upon the festival season, however, “Ayka” should have been more on our radar. After all, the film’s star, Samal Yeslyamova, won the Best Actress prize at this year’s Cannes festival, and Sergey Dvortsevoy, the director and co-writer of “Ayka,” was a Cannes sensation a decade ago with his sunny film “Tulpan.”

“Ayka” is many things, but no one in their right mind could possibly call it sunny. The temperature in Moscow is freezing, a wind-whipped blizzard rages outside, and Ayka (Yeslyamova) is awkwardly holding her newborn baby. When ordered by a hospital nurse to feed her baby, Ayka excuses herself and climbs out of a bathroom window to the snowy street below.

There, dressed in a flimsy parka, Ayka heads back to her job plucking chickens in a filthy slaughterhouse. She expects to be paid that day, but her unscrupulous bosses stiff her and escape with her money. The desperate financial straits that Ayka is in stem from her move from Kyrgyzstan to Moscow with a dream of opening a clothing factory. To realize her goal, she borrowed money from a loan shark with terms she could not possibly repay, and her time to produce the money is fast approaching.

Worse, Ayka has allowed her work permit to expire, so no reputable employer will dare hire her, forcing Ayka to seek employment from either crooks or from kind-hearted dupes willing to help. She finds one in a fellow Kyrgyz emigree (Zhipargul Abdilaeva) who allows Ayka to fill in for her as a cleaning woman at a local veterinary office. (The sight of Ayka rolling her mop bucket along a hallway filled with barking dogs and a peacock provides some brief dark humor.)

With her funds dwindling, she is forced to sleep in a crowded and dangerous flophouse where she must attend to her vaginal bleeding and her milk-filled breasts, both of which may endanger her life. All this, while the loan shark’s thugs move even closer to collecting their money.

In “Ayka,” Dvortsevoy takes a semi-documentary approach in telling the story, using an often-shaky hand-held camera to follow Ayka as she plods through the snowy streets, where she is usually seen talking on her cellphone. Though most of the film’s action takes place within a confined neighborhood, Dvortsevoy and his co-writer Gennadiy Ostrovskiy have cleverly created a running motif using Ayka’s always-ringing cellphone to connect her to the outside world, thus enlarging the scope of the drama even though the visuals are confined to the same few blocks.

Still, “Ayka” is Yeslyamova’s show from beginning to end. Her Ayka is the focus of almost every scene, allowing the actress to move from showing bitter tears to becoming doggedly determined, sometimes even within the course of one scene. Yeslyamova remains true to the character throughout, seemingly unconcerned as to whether her character and her bad decisions came off as likable or even relatable. It’s a bold choice for an actress and may be one reason why Yeslyamova won that big Cannes prize.

As the least known of the nine shortlisted foreign language films, “Ayka” may have a steep hill to climb in reaching the final five nominees, but any Oscar voter who sees “Ayka” should have to recognize that the film’s many strengths earn it a justifiable place on Oscar’s shortlist.