“ARMY OF THE DEAD” 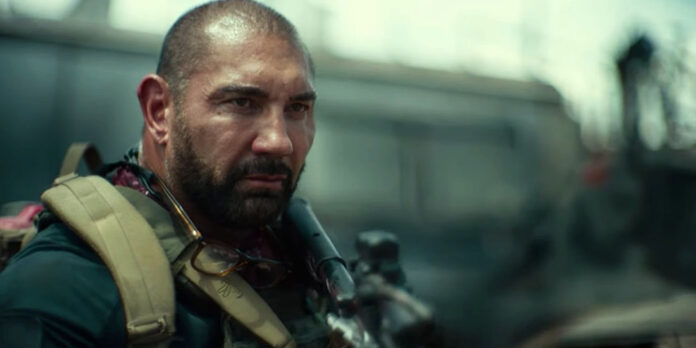 THE STORY – After a zombie outbreak in Las Vegas, a group of mercenaries takes the ultimate gamble by venturing into the quarantine zone for the greatest heist ever.

​It’s been seventeen long years since Zack Snyder made his filmmaking debut with the remake of George A. Romero’s 1978 film, “Dawn Of The Dead” in 2004. Since then, he has become a mega-blockbuster director, adapting beloved comic book stories and characters to the big screen with the occasional original work thrown in. “Army Of The Dead” marks the first time Zack has returned to the zombie genre since his debut and his first original creation since 2011’s “Sucker Punch.” One might argue that he is a more refined Michael Bay in that his films focus on large spectacle while being made for a certain demographic. However, one thing that has always separated Snyder is his blending of style and character-driven storytelling. “Army Of The Dead” comes very close to being Snyder’s best film, but much like the bloody gore that covers his zombie-filled Las Vegas city, it’s a mess in more ways than one.

By now, I think many of us have been accustomed to Zack Snyder’s pattern in moviemaking. Stunning opening credits sequence, an intriguing setup of the main story and characters, characters that are entertaining in a vacuum but don’t have much chemistry with each other on screen, a “so obvious I’m not sure if it’s bad or great” soundtrack and enough action setpieces shot in slow-motion to distract you long enough from how poorly written the dialogue is. This isn’t to say that all of Snyder’s films share these characteristics, but they’re all present in his latest. While it’s admittedly refreshing to see Snyder ditch the comic book genre and give us something original, his style is ever-present, and by this point, you either love it, or you don’t. I can honestly say that there were times while watching “Army Of The Dead” where I was having so much fun, I didn’t care that the film wasn’t “great.” There will always be something very satisfying about watching zombie action on screen, even when the film surrounding it is as flawed as this one is.

So let’s break down the points I made above. “Army Of The Dead” starts with an opening scene where a military convoy collides on a deserted Las Vegas, Nevada, highway with a vehicle being driven by two young newlyweds due to a distracting blowjob. The payload that the military convoy was carrying is let loose, and it turns out to be a zombie, which will inevitably bring about the zombie apocalypse. We see how the outbreak starts in Las Vegas set to the song “Viva Las Vegas” by Richard Cheese over the opening credits, and it never goes beyond the city as the perimeter is sealed off with a nuclear warhead set to drop on the city, eradicating all of the zombies that are trapped there on the upcoming Fourth of July. It’s an effective opening sequence (minus the needless sexual act that triggers the plot) that drops us right into the film’s story and stands as Snyder’s best opening credits sequence since “Watchmen.”

We’re then introduced to Scott Ward (A never-been-better Dave Bautista), a mercenary whose wife was tragically killed during the zombie outbreak. He remains estranged from his daughter Kate (Ella Purnell) and finds himself flipping burgers at some rundown diner when one day, opportunity comes calling from Bly Tanaka (Hiroyuki Sanada), a billionaire who recruits Scott for a suicide mission to enter into the sealed off Las Vegas, retrieve two hundred million dollars and split it up however he wants with the team he brings with him. Among some of the people who Scott brings along with him is his friend Cruz (Ana de la Reguera) as Cruz, Vanderohe (Omari Hardwick), a soldier who loves killing zombies with a buzzsaw, Ludwig Dieter (Matthias Schweighöfer), a German safecracker, Marianne Peters (Tig Notaro), a helicopter pilot who will be critical for the team’s escape from the city, Mikey Guzman (Raúl Castillo) an internet personality who has made his own success from killing zombies and more. All of these characters have distinct personalities, and some stand out more than others (You can tell Matthias Schweighöfer, in particular, is having an absolute blast playing his character). Still, they never fully gel together as a team. There is a lack of chemistry between everyone’s acting styles and personalities, thus rendering our emotional investment in their fates down to practically nothing. However, it’s Dave Bautista who carries the film on his giant muscular back, providing the movie with the emotional heft it needs to get us through the film’s overlong near two and a half hour runtime. The former pro wrestler shows us sides of himself dramatically that we’ve only ever seen hints of in the past. While his work may not be revelatory in an Academy Award-winning sense, it’s still strong enough to overcome the weaknesses of the other characters and their lack of chemistry with one another.

Of course, none of this will matter much to many out there who are already “all-in” for Zack Snyder’s sense of style and penchant for cool over practical action setpieces. There are some occasional eye-rolling soundtrack choices, such as an acoustic version of “Zombie” by the Cranberries and an over-reliance on slow-motion. Still, for the most part, Snyder’s often brutal and bloody action is quite a bit of shameless fun. Zombies take massive bites out of characters, bones are broken, bullets are sprayed everywhere (how does everyone manage to pull off perfect headshots with their automatic assault rifles?), and there’s even a zombie tiger that mauls a character, so viciously it makes the bear that attacked Leonardo DiCaprio in “The Revenant” look like a little cub by comparison. The zombies that populate Snyder’s world are also led by an “alpha” who is stronger, faster, and more intelligent than the hordes of zombies he commands. Although he never speaks any lines of dialogue, his imposing presence and gladiator-like metal helmet that he wears to protect his brain from our hero’s bullets make him a formidable adversary. Hopefully, all of these elements will distract audiences from the primarily mediocre writing that populates the film’s screenplay. It’s all teeth and no bite as it presents itself in such a masculine and straightforward manner with minimal impact or staying power. One aspect, though, which I was unfortunately never able to get comfortable with was Zack Snyder’s cinematography. Serving as his own DP for this film, there is a nauseating amount of handheld photography where nearly every shot has a shallow depth of field that is constantly having to be re-focused so characters and action can stay clear in the frame. It’s the one element that may prove to be the most divisive of all of Snyder’s choices in this film. As said before, it will either work for you or it won’t.

So, even though I wasn’t the biggest fan of “Army Of The Dead,” I cannot deny how much more freeing Snyder’s direction and vision comes across in his latest. It’s clear that Netflix pretty much let him do whatever he wanted to do with very few restrictions in place. There’s something gleeful about seeing a filmmaker working as freely as he likes, for Snyder pulls no punches and throws everything at this film he can get his hands on (much like we saw with his four hour cut of “Justice League“). The result is an overstuffed, chaotic, but wildly amusing time that will divide audiences due to its excess. Still, for those who are already fans of the popular director, they will get more than enough and will more than likely help themselves to some sloppy seconds.