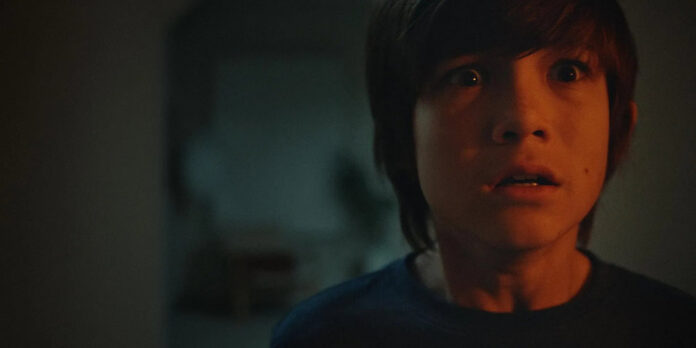 THE STORY – A mute boy becomes trapped in his apartment with a sinister monster after making a wish to fulfill his heart’s greatest desire.
​
THE CAST – Ezra Dewey, Rob Brownstein, Tevy Poe, John Erickson & Donald Pitts

In any art form, simplicity is often the key to success, especially in horror movies. So often, what scares us most are stories that echo basic spooky tales that have been passed down from generations. After all, fear comes from instinct. The new horror film “The Djinn” takes this lesson to the extreme – it is thrifty in almost every aspect, from the small cast to the single location. But can a film be too simple? At times, “The Djinn” seems to intentionally withhold exploring anything outside of the small confines of its story in a way that feels limiting rather than ingenious.

Dylan is a non-verbal boy who has recently moved into a new apartment with his father after the loss of his mother. In the closet of his new bedroom, he finds a box of old cursed-looking items. Among them, he finds what every new home needs – a copy of the Book of Shadows. In it, he finds all sorts of tips and tricks for performing dark magic. He is quickly drawn to a spell that will grant anything its conjurer desires, which he promptly uses to wish for the ability to speak verbally. Instead of instantly speaking, he finds himself terrorized by a shape-shifting djinn whose only goal is to destroy Dylan. If he can survive the night, he just may have a chance at gaining what he seeks.

The concept of the story feels like an urban legend or campfire story that would be told to kids. Notably, the film’s protagonist is a child himself. As such, it doesn’t expand very much beyond the simple cat-and-mouse game that the film establishes once the djinn has been unleashed. The vast majority of the film’s runtime is spent with Dylan being pursued by an array of new faces, which the djinn has adopted and, subsequently, trying to find a way to outwit and outmaneuver the demon. This can get repetitive quickly, and what really doesn’t help is the fact that Dylan seems to always choose the least-intelligent choice in many of the stressful situations in which he finds himself. Ezra Dewey turns in a good performance as Dylan, which is a relief as the film focuses entirely on him. His reactions and sense of quiet, methodical fear work to fill in the gaps that the screenplay leaves for his character.

The film’s sparseness is occasionally used to its advantage, and especially in the film’s first act, something is thrilling about how simple the film sets itself up to be. Its patient camera, along with its retro aesthetic that never pummels the audience with 80s nostalgia, is reminiscent of modern horror classics like “It Follows.” Its synth-heavy score is also a spooky delight. All of these elements combine to remind the audience of a creepy night home alone with no parents.

While its set-up is promising, the film never quite fulfills the promise of a thrilling small-scale horror. It has some occasional moments of fright, but overall is mostly a let-down draped in appealing visual elements. Simplicity may be a boon to some stories, but “The Djinn” is a bit too plain in its storytelling tricks.