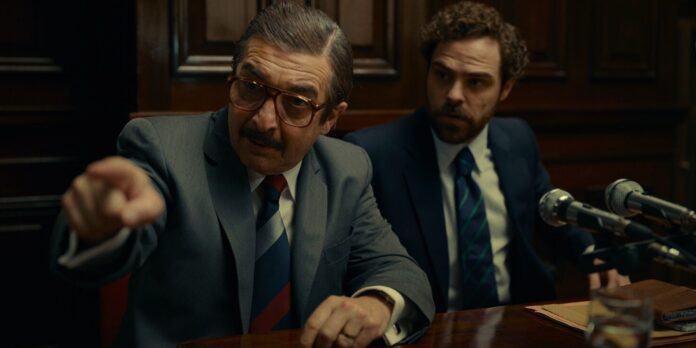 THE STORY – The true story of how a public prosecutor, a young lawyer, and their inexperienced legal team dared to prosecute the heads of Argentina’s bloody military dictatorship.

From 1976 to 1983, Argentina was ruled by a brutal military dictatorship that maintained power through its use of torture, murder, and the forced “disappearances” of tens of thousands of Argentinian citizens. By the early 1980s, however, the nation’s economy had dramatically collapsed, and the junta was forced to relinquish power, thereby restoring democracy in Argentina. Newly-elected President Raúl Alfonsín quickly vowed to hold the junta’s commanders accountable and ordered them to be put on trial for crimes against humanity. Months went by, however, with no sign of a trial date, and it was soon announced that the military trial would be changed to a civilian one and conducted by the nation’s Federal Court of Appeals. And that meant that responsibility for prosecuting the crimes of the junta’s commanders would fall squarely on the shoulders of the court’s sole Federal Prosecutor: Julio César Strassera.

The Trial of the Juntas and Strassera’s unique challenge in prosecuting it are the subjects of “Argentina, 1985,” Santiago Mitre’s new film that, on the surface, checks off all the boxes for what is often called a “Very Important Movie” — historical relevance, good vs. evil, one man standing up for justice, etc., etc. The only thing is Mitre isn’t interested in just making a significant film that honors the history, events, and people with which it’s telling. Certainly, he wants the valuable lessons of history to come through to the audience, and political parallels to today do come through loud and clear in “Argentina, 1985.” But the real-life drama of the trial, both inside and outside the courtroom, is too rich to ignore, and Mitre fashions those events to create a crackling courtroom thriller.

In addition, Mitre and his co-writer Mariano Llinás have one more surprising secret weapon — humor — that proves to be unexpectedly effective in helping to flesh out his characters as people and not just as props in a trial. Strassera (Ricardo Darín in a terrific performance) is hardly depicted, for example, as a knight in shining armor, but instead as just a workaday lawyer. When finally presented with carrying the responsibility of this important trial on his shoulders, he does what many of us would likely do — he tries to get out of it.

Failing that, he hopes to rely on others to aid him as Assistant Prosecutor. Still, all the likely prospects are tied to the corrupt regime he’s investigating — in perusing the list, he disqualifies all candidates as either “fascist,” “very fascist,” or “dead…and he was super-fascist.” Strassera finally settles on young prosecutor Luis Moreno Ocampo (Peter Lanzani), with whom he bickers throughout the entire investigation but who brings on board a cadre of young lawyers who are hungry enough (and perhaps naive enough) to join the team, risking their own futures in the event this prosecution fails. In each case, all become characters with whom we have a rooting interest.

However, Miter is all business when it comes to the actual Trial of the Juntas. Often taking testimony directly from the transcript of the trial, he allows the victims’ stories to play out on the stand at length, producing moments that are both riveting and even raw in their dramatic impact, such as one courageous woman’s experience of being held captive by the junta and being forced to give birth while blindfolded. And in the film’s climactic closing argument, Darin offers a masterclass on how to deliver a monologue, beginning quietly and building slowly to a shattering conclusion. To both young actors and aspiring lawyers: this, my friends, is how it’s done.

If there are any qualms about “Argentina, 1985,” it’s in its final ten minutes where it fumbles the ball at the goal line. The aftermath of the verdict and the reaction of Strassera’s young team to it is presented in montages that feel downright cheesy at times as if it’s an ABC pilot for a “Young Lawyers” show from the 1980s. It’s an unfortunate shift in tone from the very careful mood set in the preceding two hours that will remind viewers of the not-so-well-received sentimentality of something like “The Trial Of The Chicago 7.”

“Argentina, 1985” is a definite crowd-pleaser in the very best sense of the term. It has a story to tell that can be difficult to hear, but it wisely engages the audience early so that when the real-life horrors of the junta are revealed, rather than be repulsed, we are drawn ever closer to the victims’ story. It’s a skill that many have tried, but few have succeeded with quite the same dexterity as “Argentina, 1985.”