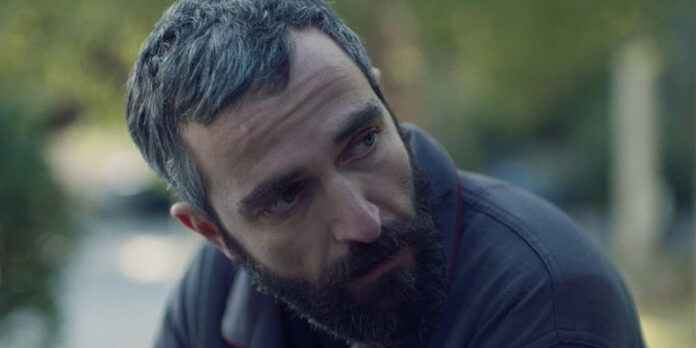 The pandemic is one of those world-altering events that, apart from changing the basic habits of everyday life, has also come to heavily influence the art that’s currently created. The prism through which stories are constructed now is destined to be molded through an evolved sensibility, and media would inevitably reflect this evolving perspective. The journey of the new film “Apples” is a unique case in this regard, as its premise feels especially fitted for our modern times. Conversely, it depicts something of an oddity given its journey started long before these dramatic events ever occurred. The results are an intriguing display that speaks to the moment while also capturing a timeless analysis.

The film is set at a time when a virus has ravaged large sections of the population, leading to skyrocketing cases of amnesia. Infrastructure has been established to help such afflicted individuals, such as specialty hospitals and welfare programs, though the virus’s origin and cure remain unknown. A man named Aris (Aris Servetalis) appears to have been stricken by this disease himself as he is discovered on a bus with no memory of how he got there. However, it’s heavily implied that Aris is faking his conditions for mysterious reasons. As he progresses through a new life, he must wrestle with novel circumstances while acknowledging the past actions that have brought him to such a pivotal juncture in life.

Christos Nikou makes his directorial debut here, though his previous work has put him in close proximity with Yorgos Lanthimos, acting as somewhat of a mentor. One can certainly feel that influence with this piece, a darkly-tinged environment infused with an off-kilter sensibility in a contemporary sheen. That stark framing plays right into the claustrophobic aspect ratio and successfully represents the subtle oddity that plagues this setting. Nikou does struggle at times to keep the momentum at a consistently engaging pace, even for a film that runs at a brisk ninety minutes. Yet his directorial hand feels steady and in control, crafting a perspective that is appropriately clinical and intimate simultaneously.

The screenplay from Nikou and Stavros Raptis builds a quiet atmosphere that uses its concept to be filled with metaphors that connect to current sensibilities. There’s a heavy commentary on the presence of overwhelming grief that can consume one following a tremendous loss and the isolation that drives a desperate sense of reborn connectivity. The notion that the rediscovery of such essential touchstones can only be sought through fleeting flashpoints that are painfully manufactured reveals the superficiality which consumes so many. It’s a thesis that is only skin deep, and such explorations are not particularly nuanced. Still, the concise nature of this narrative allows for a focused examination that supports the storytelling, even if the execution is more on the obvious side.

Servetalis’s central performance is a well-placed anchor for this piece as he perfectly matches the subdued energy that pulsates throughout. It’s an internalized portrayal that softly emphasizes the deep melancholy that tortures this incredibly lonely individual. Servetalis serves as a committed guide through this sea of despair and communicates a simple yet articulated character through delicate observations. He occupies nearly every frame and therefore is really the only performer who makes any significant impact. The only one who even competes is Sofia Georgvassili, who plays another amnesiac who develops a personal connection with Aris. She gives a serviceable turn, though not altogether extraordinary. It really is a showcase for Servetalis, and his grounding demeanor is ideally suited for the material.

“Apples” is not the first film to speak to such present anxieties, nor will it be the last. Its pensive study on personal loss and the journey to recover the threads back to any sense of solace is not a particularly complex treatise. The dissection is relatively shallow and, as such, allows only for so much discussion. Yet, the filmmaking offers a restrained confidence that can make this story captivating, and the themes themselves are still intriguing in their own right. A compelling central performance keeps one invested even if it is the only acting exhibition designed to be noticeable. The final results may find the whole less than the sum of its parts, but there is an alluring interrogation here all the same.