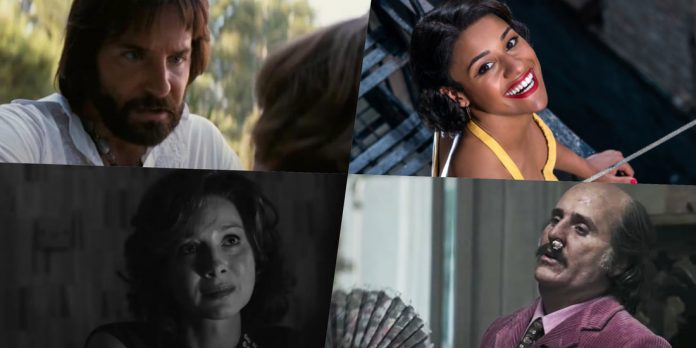 The New York Film Festival premiere of “The Tragedy of Macbeth” not only confirmed it would be in the awards season conversation, but last year’s Best Actress winner, Frances McDormand, may once again be there as well. Yet if she is placed in the Supporting Actress category, she will merely be one of nearly a dozen who have already made a big case to squeeze into the field of five – which is more than what can be said about the other supporting field so far.

The big question now hanging over Supporting Actress is whether its presumed early frontrunner will even be in the category. Before its Telluride premiere and its victorious screenings in Toronto, “Belfast’s” best bet in Supporting Actress looked to be Judi Dench. However, Caitriona Balfe emerged as its real secret weapon instead. As such, a big push and possible win for Balfe in Supporting Actress could be the key to cementing “Belfast” as the Best Picture favorite. But even with that newfound hope, there is no word yet on whether all “Belfast” adults will submit as supporting actors or whether Balfe and Jamie Dornan will submit in lead as first assumed. Supporting Actor could hinge on this decision as well, mainly because it is so wide open and doesn’t have a widely assumed early leader so far. As such, if Dornan goes in supporting too, he could be a major threat and a possible key to “Belfast’s” Best Picture formula as well. In the recent past, a supporting acting victory and a Screenplay win have been more than enough to secure Best Picture, so this decision would seem to be a no-brainer for Kenneth Branagh and Focus Features. But until the call is officially made, everything is still up in the air. If Balfe goes lead, Supporting Actress would lose an early frontrunner, yet plenty are waiting to take her place. However, a few of them are facing a Best Actress or Supporting Actress dilemma as well, like McDormand and perhaps Jodie Comer for “The Last Duel” Nonetheless, even if one, two, or all three of them go lead instead, Supporting Actress still has a deep pool to fall back on. In contrast, Supporting Actor is still waiting around for most of its future nominees and heavy hitters.

Aside from Dornan, the biggest presumed contender who was screened in festivals was Richard Jenkins for “The Humans“; yet he might not count if its day-and-date Thanksgiving release in theaters and on Showtime places him in the Emmy race instead of the Oscars. Beyond them, passion from critics and award season resources will likely determine the fate of other prospects, like Jason Isaacs for “Mass,” Troy Kotsur for “CODA,” or Ciaran Hinds for “Belfast” if Dornan clears out of the way. Possibly Andrew Garfield for “The Eyes of Tammy Faye” if it can help boost Jessica Chastain in Best Actress or Garfield’s own potential Best Actor run for “tick…tick…Boom!“

Supporting Actress has a seemingly more secure variety of early contenders right out of the gate, like preseason favorite Kirsten Dunst for “The Power of the Dog,” Ann Dowd for “Mass,” Aunjanue Ellis for “King Richard,” Ruth Negga for “Passing,” Marlee Matlin for “CODA,” Jesse Buckley for “The Lost Daughter,” Jayne Houdyshell for “The Humans” if she’s eligible, and Dench as “Belfast’s” newfound backup plan or potential second Supporting Actress nominee. If Balfe, McDormand, and Comer do indeed join this mix, and if projected future contenders join them like Ariana DeBose for “West Side Story,” Rooney Mara or Toni Collette for “Nightmare Alley” and Meryl Streep or Cate Blanchett for “Don’t Look Up,” it will be a war just to get in this field before trying to win it.

On the other hand, the bulk of the Supporting Actor field will probably have to come from non-festival movies. After the debut trailer for Paul Thomas Anderson’s “Licorice Pizza,” most eyes are on Bradley Cooper to fit the bill, as he can certainly ride his star power, his overdue narrative, and maybe even the chance to be a double nominee for “Nightmare Alley.” Still, “Licorice Pizza” could either propel both Cooper and Anderson to long-overdue triumphs or prove itself too divisive or out there for voters altogether.

Should that fall through, then the next best hope to fill the field will come from the ensembles of “Don’t Look Up,” “House of Gucci,” “West Side Story,” and “Nightmare Alley.” “Don’t Look Up” does have Jonah Hill, Mark Rylance, and the suspiciously higher billed Rob Morgan as potential threats, should they manage to steal enough scenes from their decorated co-stars. “House of Gucci” certainly garnered attention in its debut trailer for Jared Leto’s scenery-chewing makeup and accent, but the 2013 Supporting Actor winner and 2020 Golden Globe and SAG nominee can crash a vulnerable field if enough voters laugh with him and not at him. Meanwhile, “West Side Story” has David Alvarez in the part that won George Chakiris a Supporting Actor Oscar 60 years ago. Also, “Nightmare Alley” has the perennially overdue Willam Dafoe narrating its first teaser.

By the end of the season, roles could very well reverse in the supporting categories, as Supporting Actor may prove to be more crowded. At the same time, early Supporting Actress leaders might taper off or switch categories altogether. Much like this season as a whole, everything hinges on how many of the big holiday movies and their cast members are true players or pretenders. Up to this point, Supporting Actress has been gathering new additions and frontrunners non-stop, while the Supporting Actor field is in a holding pattern for anyone to take its open spots. If Dornan doesn’t stay in supporting and Jenkins doesn’t even stay in Oscar season, then it will be a long wait for the likes of Cooper, Leto, Alvarez, or anyone else to take command or merely fill up an entire field. Yet if Balfe bypasses supporting as well, there is no shortage of replacement early frontrunners to take the Supporting Actress baton, at least until the holidays.

For now, the big waiting game in Supporting Actress is whether a crowded field will shrink by losing its early frontrunner, a reigning Oscar-winning candidate, and an Emmy-winning newcomer to another category. Meanwhile, across the way, Supporting Actor is still waiting around to see what kind of crowd it can expect. Though by March 2022, it may not matter whether these fields are crowded or thin, should they each have one big frontrunner steamrolling to victory either way. Yet, depending on which film they come from, it could represent one of the last pieces of the puzzle for Best Picture. But first, one supporting category needs a few more puzzle pieces to fill in, while the other has to figure out if it has too many in more ways than one.

Who do you think will be nominated in the Supporting categories this year at the Oscars? Check out the NBP team’s latest predictions here. Let us know your thoughts in the comments section below or on our Twitter account.