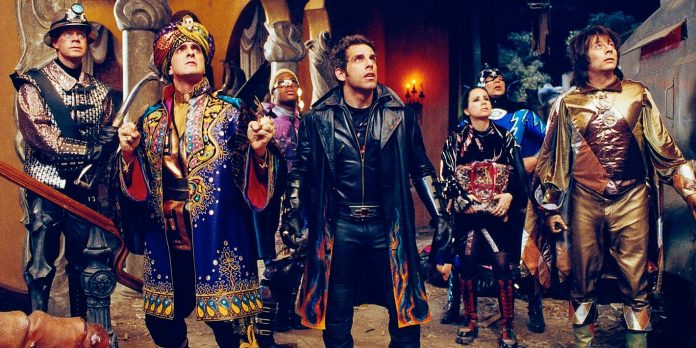 Long before the “Avengers” and the “Justice League” exploded onto our screens, there was another superhero squad who were brought together to fight crime and save the day. I suspect many of you reading this aren’t aware of the 1999 film “Mystery Men.” Of course, you are excused for not knowing who the ‘mystery men’ are, as the film flopped specularly at the Box Office, earning just $33 million worldwide against a $68 million budget. Since the film’s disastrous release, its director Kinka Usher hasn’t directed another feature film. In fact, it’s claimed that during production Usher declared “I’m going back to commercials when this is done. I’ve had enough. I’d much rather do my cool little one-minute shorts that I make than deal with all this nonsense.”

“Mystery Men” is an adaptation of a little-known Dark Horse spin-off called “Flaming Carrot” Comics written Bob Burden. However, the Flaming Carrot (who in Buren’s comics was a founding member of the Mystery Men) doesn’t appear in the comics. Perhaps a man wearing a giant carrot mask on his head was a little too much for the film. Instead, there’s a wealth of heroes who are just as ridiculous, like Ben Stiller’s Mr. Furious (whose power is that he gets really, really mad), William H.Macy’s The Shoveller (“I shovel well. I shovel very well”), Hank Azaria’s The Blue Raja (a ‘British’ fork-thrower), and Janeane Garofalo’s The Bowler (who carries her father’s skull in a bowling ball), among others.

Like the Marvel films, “Mystery Men” has the same quirky, often dry humor. Even when there are more somber, serious moments, the film still manages to squeeze in a joke here and there. If released today “Mystery Men” wouldn’t look out of place in the line-up of summer releases. However, “Mystery Men” was released at a time just before the boom in comic book adaptations, and in 1999 the genre had become stuck in a rut before being reinvented by the likes of “X-Men” (2000) and “Spider-Man” (2002). Back in 1999, the last big ‘superhero’ film to grace the big screen, had been the disastrous “Batman and Robin” (1998) which pretty much killed the Batman franchise until Christopher Nolan’s “Batman Begins” (2005).

Aside from the likes of Tim Burton’s “Batman” (1989) and “Batman Returns” (1992), superhero films tended to be clean, wholesome entertainment for the entire family to enjoy. Richard Donner’s Superman (1978) saw Christopher Reeve’s hero being the true embodiment of the American way of life, standing for truth, justice, and all that jazz. The Mystery Men wouldn’t even qualify for the Justice League, with their poor levels of organization, constant bickering, curfews and lack of actual ‘superpowers’. In fact, as The Shoveller puts it, “We’re not your classic heroes. We’re the other guys.” The Mystery Men aren’t exactly your first, or even second or third choice when it comes to heroes. However, the film never really mocks the gang for going after their dream of becoming crime fighters, there’s an admirable earnestness to their determination to help keep their city safe.

“Mystery Men” has hints of a darker film brimming under the surface, like a watered-down version of Alan Moore’s “Watchmen”, only with more jokes on farting and less nudity. One can certainly see touches of satire in the film, especially in how it critical it seems to be with corporate America and the advertising companies with Greg Kinnear’s egocentric, narcissistic Captain Amazing being obsessed with keeping his sponsors happy. Captain Amazing is so amazing that he has no-one else around to fight (even Death Man is well…dead) and as a result, his sponsors are now pulling out.

​As a result, he manages to pull some strings as his ‘alter-ego’ Lance Hunt (picture a Bruce Wayne type) and gets his greatest foe Casanova Frankenstein (Geoffrey Rush), released from jail. Casanova immediately outsmarts Captain Amazing, which sees the hero becoming Frankenstein’s prisoner. With no-one else around to save the city, it’s left up to Stiller’s, Macy’s and Azaria’s wannabe superheroes to form their own version of the avengers. In the film’s funniest scene, they hold an audition which sees several ‘superheroes’ try out including The Waffler (‘I’m the Waffler, gold and crispy, bad guys are history”), Pencil Head and Son of Pencil Head (a father/son crime-fighting duo), and the PMS Avenger (who only works 4 days a month).

The film’s strength clearly lies in its quirky, offbeat comedy which certainly lends itself to the series of slacker/stoner comedy films that were rampant in the late 90s/early 00s and have now gone on to become cult classics of sorts. Films like “Road Trip” (2000), “Dude, Where’s My Car?” (2000), “Jay and Silent Bob Strike Back” (2001), “Not Another Teen Movie” (2001) some of which haven’t exactly dated well but still are so outrageously political incorrect that they could have only been made that era. With its many quotable lines, “Mystery Men” is very much in the same vein with these films, however, it’s comedy seems less dated maybe down to the fact that the jokes aren’t essentially time specific. The only aspect that dates the film is its soundtrack ( it’s almost impossible to listen to Smash Mouth’s “All-Star” without being reminded of all the memes floating around on YouTube).

However, there’s more to “Mystery Men” than just being another comedy from this period. As mentioned before, the film had a high budget and it certainly shows on screen. The sprawling, neon-lit cityscape looks like a blend of “Blade Runner” crossed with Gotham from the 90s Batman films, a far cry from the clean, daytime streets of Superman’s Metropolis. Champion City is a melting pot of different cultures, existing in a place outside time and reality. It may be crime-riddled, but in a lot of ways, it seems like a utopia, a land of true opportunity where a band of miscasts can become heroes. If “Mystery Men” has taught me anything, it’s that only shooting stars break the mold. Now, if you fork-give me I need to grab my shovel and go kick some butt…crime never stops. ​

Have you ever seen “Mystery Men” before? What do you think? Let us know in the comments section below or on our Twitter account.