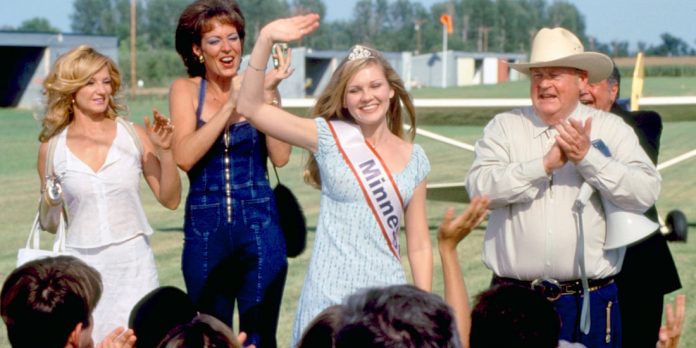 ​I distinctly remember the first time I watched “Drop Dead Gorgeous:” in middle school on the E! Network, which perfectly sums up the vibe of this movie. I’m sure a lot of the jokes went over my head, but I couldn’t help but be drawn to these wacky characters in outlandish situations talking to the camera. Now here we are, with the film recently celebrating its 20th anniversary, I can finally tell you all about my love for this under-seen gem of a movie.

​”Drop Dead Gorgeous” is a 1999 campy dark comedy directed by Michael Patrick Jann, told in a mockumentary style. It tells the story of the comically titled “Sarah Rose Cosmetics Mount Rose American Teen Princess Pageant” in the fictional town of Mount Rose, Minnesota, as deathly corruption overtakes the beauty pageant. Right from its opening, it is clear what kind of film you’re getting into. A title card describing the documentary style of the film appears on screen, including typos and grammatical errors. This is followed by an over-the-top commercial for the national level of the pageant, featuring the master of ceremonies himself Adam West as he details the pageant to potential contestants with a slew of pretty girls around him.

The film is filled with little details that make no sense and are therefore hilarious, like how the film takes place in 1995 rather than present-day 1999 for no reason or the lack of realism in the mockumentary style with various shot angles and standard editing. However, the film is most likely remembered for its all-star female cast. From young actresses on the rise like Kirsten Dunst, Brittany Murphy, and Amy Adams (in her film debut) to memorable supporting turns from Ellen Barkin and Allison Janney, as well as career-best work from Kirstie Alley and Denise Richards. The film gives all of these ladies a chance to shine in unique and hilarious ways.

Dunst’s Amber Atkins is the protagonist of this film, with the narrative as the innocent underdog of the pageant. Amber loves tap-dancing, works at the local funeral home applying makeup to corpses, and idolizes Diane Sawyer. She lives in a trailer park with her chain-smoking, beer-drinking, hairdresser mother (Barkin). Her clear rival in the pageant is Becky Leeman (Richards), who just happens to be the daughter of the pageant committee chair (Alley) and is apart of the richest family in town. Strange and sometimes deadly things begin happening to Amber and the other contestants leading up to the pageant, leading a clear path to discovering the Leeman’s fame and money-hungry plan.

Some several key scenes and sections are clear hysterical highlights. The first part of the movie is introducing and interviewing all the key players in this story, from the contestants and their families to the pageant committee and the judges. Immediately, the off-kilter whacky sense of humor of this film becomes apparent in these introductions. You’re putting these awkward, small-town characters in front of a camera and how they react to that can provide a lot of humor.

​The next pivotal scene is the contestant interview montage, in which the girls are professionally interviewed by the judges before the pageant. Since it is clear that the judges have no idea what they are doing and the pageant is likely rigged, hilarity ensues with the ridiculous questions they ask (such as “If you were a tree, what kind would you be?”) and the absurd answers the girls give, all while other strange things are happening around them.

By far the highlight of the film is the actual pageant. For the opening number, the girls all come out with giant paper-mâché monuments on their heads as they describe what makes them proud to be an American. Their big dance number involves them in patriotic sporty outfits poorly timed to Gloria Estefan’s “Congo,” all while they keep accidentally getting blue paint on their white shorts and skin from freshly painted props. The talent portion showcases peak ridiculousness; from a Soylent Green monologue to a bizarre rendition of “Can’t Take My Eyes Off Of You” featuring a Jesus dummy hung on a cross on wheels, it is brilliant.

Critics panned the film at the time, holding a 45% on Rotten Tomatoes. They typically liked the idea and concept of the film but not the execution and didn’t quite get it. However, twenty years later, it has become a cult classic. The film could be considered dated for its non-PC humor by today’s standards, with jokes on everything from anorexia to autism, but its edginess is what sets it apart from its contemporaries or films like it. Female-led comedies, and especially those about high schoolers, never go this far and it feels ahead of its time in that way. It showcases this type of rural or middle-America comedy that would become prevalent in the 2000s from people like Adam McKay. It also uses humor to discuss the major class divides of small towns, where there are the rich business owners and then everyone else (specifically those living in trailer parks).

Notoriously, the film became known for its lack of availability in recent years, with it not being available on any streaming services (even to rent) or even having a Blu-ray release. However, this past month it was joyously added to Hulu, where it can hopefully be watched and enjoyed by many. I highly recommend this movie to comedy enthusiasts or just anyone who’s very into cult comedies like it.

Have you ever seen “Drop Dead Gorgeous” before? If so, what do you think? Let us know in the comments section below or on our Twitter account.