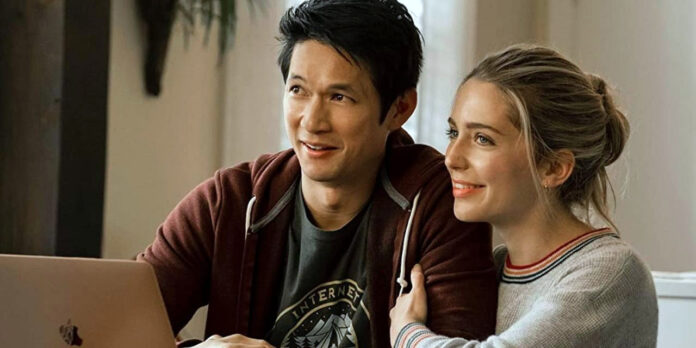 THE STORY – A couple’s wedding plans are thrown off course when the groom is diagnosed with liver cancer.

​One result of living through months of a pandemic is that it’s harder to take things for granted. Seeing the state of the world over the past ten months has been a stark reminder that the future is never guaranteed. In many ways, it’s fortunate that “All My Life” is being released in the year 2020 as it certainly carries that message. Directed by Marc Meyers and written by Todd Rosenberg, it is based on the true story of Solomon Chau and Jennifer Carter. While it’s a reasonably average romantic drama in most ways, the story is very moving at the heart of it.

Solomon (Harry Shum Jr.) and Jennifer (Jessica Rothe) were, in many ways, a normal couple. In the film, we see them meet at a bar, start dating, and move in together. She convinces him to quit his job in digital marketing and pursue his passion for cooking. Their friend groups merge together and he proposes to her. But their seemingly perfect life comes crashing down when Solomon suddenly collapses in pain one day and is diagnosed with liver cancer. Despite his prognosis, they decide to push ahead with planning their wedding at the behest of their friends.

The cliché writing holds the story back from realizing its full potential. While the early scenes of them dating work due to their chemistry, it happens too quickly and feels rushed. We never learn much about Jennifer outside of their relationship, making her character feel two-dimensional. And the romance is sickly sweet — there are even multiple scenes of them brushing their teeth together.

Despite this, the film does tap into something more profound. Amongst them looking at a wedding venue and her choosing a wedding dress are scenes of them dealing with his illness. It contends with some real emotions and explores how different people process grief and while it doesn’t go very deep, it’s still somewhat effective. Knowing that it’s based on a true story only makes it hit harder and it’s sure to draw tears from some audience members.

Rothe carries much of the film with her performance. While Shum isn’t as reliable as her, they are undeniably charming together. The film also focuses on their friend group, which is played by a diverse cast with Asian, Latinx, and Black actors. Keala Settle, known for her work on Broadway and in “The Greatest Showman,” plays one of their friends and even gets to belt out a few songs. Shum also gets to do a bit of singing, which will definitely please fans of his work on “Glee.”

While “All My Life” isn’t for everyone, fans of movies based on Nicholas Sparks’s books will undoubtedly love it. The execution could have been better, but the story is touching and the leads manage to (mostly) pull it off. Chau passed away in 2015 and it’s lovely that there is a film that commemorates the sweet love that he shared with his wife. Most of us don’t need a reminder of the preciousness of each day with everything going on, but this film offers one anyway.