“ALL IN: THE FIGHT FOR DEMOCRACY” 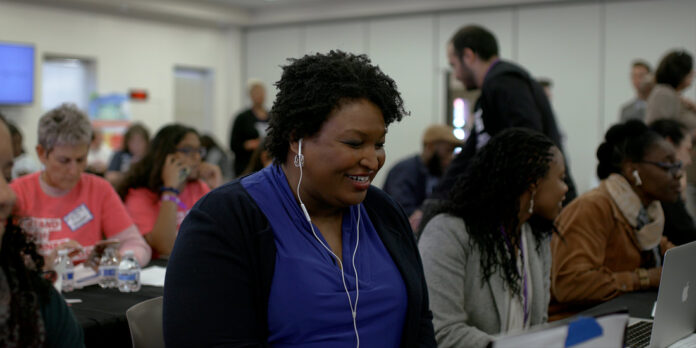 THE STORY – Filmmakers Liz Garbus and Lisa Cortes examine the history of voter suppression and the activists who fight for the rights of U.S. citizens.
​
THE CAST – Stacey Abrams
​
THE TEAM – Liz Garbus & Lisa Cortés (Director/Writer)
​
THE RUNNING TIME – 102 Minutes

​​​​A lot of films get called “timely,” but it’s hard to argue that anything could be more relevant right now than “All In: The Fight for Democracy” two months ahead of the 2020 election. The documentary, directed by Liz Garbus and Lisa Cortés and written by Jack Youngelson, chronicles the history of voter suppression and voter rights in the United States. At the heart of it is Stacey Abrams, both as a producer and interview subject, and as a way to showcase how voter suppression affects modern elections.

The documentary takes a chronological approach to discussing voting rights in the United States since its founding when only 6% of its citizens were eligible to vote. It shows how the high voting rates amongst Black people during the Reconstruction era gave way to extremely low rates due to Jim Crow laws. It delves into the activism of the Civil Rights era and shares footage of “Bloody Sunday” in Selma. Poll taxes and literacy tests were followed by gerrymandering and voter ID laws, all designed to keep Black Americans from exercising their right to vote.

The documentary also touches on the women’s suffrage movement, the suppression of the Native American vote, and the disenfranchisement of those who have committed felonies. It does a fantastic job of transitioning between sections and provides text cards with years on them so that the audience doesn’t get lost. It packs a lot of information into less than two hours, but it also gives each topic breathing room so that the audience doesn’t feel overwhelmed.

“All In” is full of news footage, photographs, and interviews with both ordinary citizens and experts. The formal interviews range from Emory professor Carol Anderson to voting rights activist Desmond Meade to politician and activist Andrew Jackson Young Jr. There is a wide variety of perspectives and experiences shared, making it possible to have a well-rounded view of the issue at hand. One standout in the documentary is the drawings animated to illustrate certain stories which are both an effective storytelling tool and aesthetically pleasing. This wealth of footage is edited together incredibly well and the documentary is perfectly paced.

The film is framed through Stacey Abrams’s race for governor of Georgia against Brian Kemp and illuminates the voter suppression that occurred that November of 2018. Abrams’s family history is woven through the film, with stories about her grandmother and interviews with her parents. Many of us may have similar memories of our parents taking us along with them to vote as children, but Abrams has been determinedly working to increase voter registration and voter turnout since she was in college. Abrams is poised and eloquent, while still clearly passionate about the subject.

The United States is one of the worst democracies in the world when it comes to voter integrity. Not only is low voter turnout an issue, but voter suppression runs rampant particularly focused against minority groups. The documentary, which feels remarkably current, ends with a call to action to register and to vote and to ensure that your friends and family do as well. It’s the sort of film that makes you angry about the injustice that it recounts, while also motivating you to do something to make a change. “All In: The Fight for Democracy” is not only one of the best-made documentaries of this year, but it’s also arguably the most important.