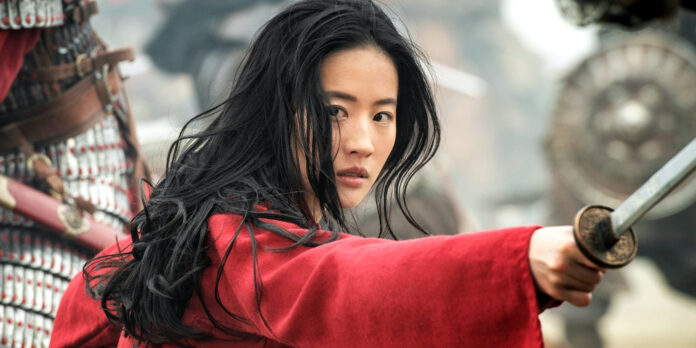 THE STORY – To save her ailing father from serving in the Imperial Army, a fearless young woman disguises herself as a man to battle northern invaders in China.

​“Mulan” has always been an influential film in my life. It’s one of the first movies I remember viewing at the theater at just three years old. I quoted it endlessly and sang the songs on repeat throughout my childhood (actually, I still sing them today.) Sure, it’s an animated film, but there’s something for everyone. It’s a quintessential Disney renaissance film, blending action, music, and comedy. And right at its heart is a wonderful role model for people of all ages.

When news of a live-action “Mulan” was announced, I was thrilled. Although many people have grown tired of Disney’s live-action formula, I needed to see what it would be like for one of my favorite characters to be given the live-action treatment. Just as the world prepared to see “Mulan” on the big screen, the pandemic hit, shutting theaters down. This led to countless release delays for the film. Eventually, the decision was made that Disney’s most expensive live-action film (coming in at a budget of $200 million) would premiere on Disney Plus for a fee of $29.99 (U.S.) on September 4th.

Sitting down to watch “Mulan,” I was so excited. It was a joy to get swept away by the epic story and breathtaking visuals for two hours. Disney hired a female director for the film, and Niki Caro (“Whale Rider” & “The Zookeeper’s Wife”) specializes in telling stories from a female perspective (However, we can agree that a Chinese director would have been more appropriately suited). That is evident in “Mulan” as Caro showcases Mulan’s struggle to be a warrior in 15th century China where a woman’s place is in the home. As the emblem on Mulan’s sword reads, “Loyal. Brave. True,” that is just what Yifei Liu brings to the character. It’s a loyal, brave, and true performance of the iconic character. She showcases the difficulty of being a woman in her times, the uncertainty of going to war, and a warrior’s strength.

My fellow “Mulan” fans, there are several changes to the script, so prepare yourselves. While the 1998 “Mulan” was a family-friendly comedy musical, the live-action flick switches gears to be a high octane action flick with a darker tone. Due to the change in tone, Mushu is gone. Instead, a silent flying phoenix watches over Mulan when grave danger approaches. There are no musical numbers sung by Donny Osmond. I know – what is “Mulan” without “I’ll Make a Man Out of You”? It isn’t easy to imagine, but it wouldn’t have fit the film to have anyone break out into song. Thankfully, Harry Gregson-Williams’ excellent score for the film incorporates the remarkable melodies from the original.

Some of the new script additions work well, while others are head-scratchers. Instead of the Huns, the villains of the film are the Rhorans, invaders led by Böri Khan (Jason Scott Lee), preparing to invade China. They’re aided by Xianniang (Gong Li), a witch who magically appears when the script deems it necessary. She shapeshifts, turns into a bird, and takes over people’s bodies. Her character is unnecessary to the plot and could be removed without the story suffering. While Shan Yu and the Huns of the ‘98 film were terrifying, we find ourselves disinterested in the villains of this adaption. They don’t evoke the same intimidation of the animated adaptation and exist mainly as plot devices to get in Mulan’s way.

Despite several new changes, the core of the story (based on the poem the “Ballad of Mulan”) is still there, as Hua Mulan poses as Hua Jun to take her father’s place in battle and bring honor to the family. Familiar characters, like the matchmaker and the Emporer (Jet Li), still make appearances. We can’t forget about Po, Ling, and Yao, who show up as soldiers training with Mulan. They don’t all sing “A Girl Worth Fighting For,” but have lots of personality and light-hearted moments just like their animated counterparts. Replacing Shang is Donnie Yen, who turns in a memorable performance as the stern Commander Tung. Even though Shang isn’t around, Yoson An holds his own as Mulan’s fellow soldier, Honghui. He and Mulan have plenty of chemistry to keep your attention.

This is a visually stunning film that admirably depicts Chinese culture. The set design of Imperial China is particularly memorable with its exquisite, ornate detail in each frame. Each set, ranging from Mulan’s small town to the army training facility to a snow-covered battlefield, leaves an impression on the viewer. The costume design adds another layer of beauty. Some of the iconic looks from the animated film are recreated, like Mulan’s matchmaker dress, and new looks like her training outfit and battle armor are unique to the new adaptation.

The visuals go beyond just the sets and costumes. The action sequences in “Mulan” thrillingly utilize martial arts. There’s a real “Crouching Tiger, Hidden Dragon” feel to the fight choreography as the characters leap, lunge, and float around while fighting. It’s all beautifully filmed by cinematographer Mandy Walker. As audience members, we can’t help but feel swept away by the action style as Mulan and the soldiers ride into battle with an instrumental variation of “Reflection” accompanying the scene.

This is a story of bravery, loyalty, and truth – and an exciting one at that. Although it never quite reaches the soaring heights of the animated original, “Mulan” is a visually impressive thrill ride that brings honor to the character.