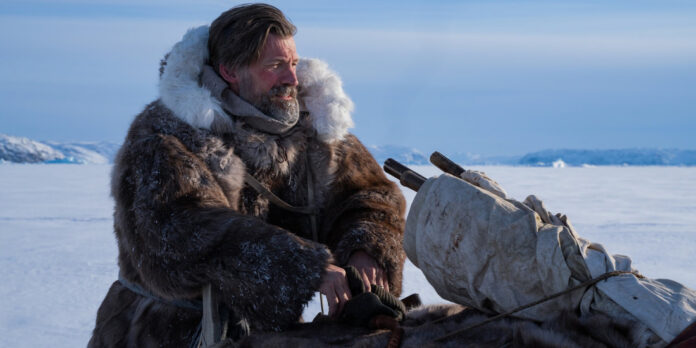 Two real-life Danish arctic explorers were stranded with minimal food, battling the freezing cold elements and their own internal demons for more than two years in 1910, seeking to disprove the United States’ claim to North-Eastern Greenland. How could this premise possibly make for a dull movie? With “Against the Ice,” director Peter Flinth and writers Nikolaj Coster-Waldau (who wrote the script and stars in the film) and Joe Derrick do their very best to answer that question.

The true story at the film’s center is an exciting, even extraordinary tale of human survival in dire conditions. Unfortunately, the film wants to cover a two-year-plus journey of survival in an hour and 45 minutes, which means the film leaps around, skipping huge swaths of time, leaving very few moments for the audience to get emotionally invested in the characters or the story. The story also never has a chance to build up a suitable amount of tension. Consequences rarely have the opportunity to unfold. Instead, events just…happen. Bears attack. We see Waldau and co-star Joe Cole react, and then we move on two months later, missing all of the little details in between. It’s a plodding exercise in showcasing the greatest hits from the real-life account with minimal connective tissue and little room to let more fascinating elements of the story or the characters breathe.

Not only is the overarching narrative devoid of tension, so too are individual scenes. There are action sequences involving careening sleds and CGI bears, but there is seldom a sense of danger conveyed through the film’s direction or an understanding of how painful the conditions must have been to endure. The harsh, snowy environments seem ‘pretty’ but strangely artificial despite filming on location. The images rarely suggest the severe cold we’re meant to believe the characters are inhabiting, something that a film like “The Revenant” was skillfully able to express.

The film attempts to compensate for this by manipulating its audience through the easy emotional card of dog deaths. When the story starts, there are roughly a dozen dogs. The film aims for grit and pathos by subjecting them to death by falling, starvation, being eaten by a polar bear, exhaustion, execution, butchered, and eaten on-camera by humans. It’s unpleasant and unnecessary, especially when the film fails to generate that level of intensity anywhere else. Because, once again, the film is so committed to fitting a lengthy period of time into a short movie that whenever there is an emotional dog loss, instead of showing how the characters react, we’re instead rushed off to another sequence four months ahead.

This cliff notes version of this incredible story might work if the screenplay fleshed out the characters. Still, despite the best efforts of Coster-Waldau and Cole, the characters of Captain Ejnar Mikkelsen and his volunteer mechanic Iver Iversen are largely flat. They come to like each other more as the story progresses, and then there is some tension later on. Eventually, get a little bit crazy as the weeks turn into months, and months turn into years. There are some moments of levity, but there’s not much more depth to their relationship or their individual characters beyond the obligatory stock character flashbacks to Mikkelsen’s pining wife back home.

All of this adds up to a film that is somehow boring, despite its determination to skip through events and time as rapidly as possible and give audiences a thrilling cinematic experience. There are a few saving graces to be found in “Against The Ice.” The cinematography may not capture the cold of the North-Eastern Greenland environment, but the images are often impressive if hamstrung by choppy editing. The score by Volker Bertelmann (“Lion“) is evocative and goes a long way with giving the film any sense of warmth. And Nikolaj Coster-Waldau does his best to showcase the rage, fear, and anxiety of a brave man trapped at the edge of the world. He’s very good here, but he’s not offering the viewer anything he hasn’t done equally well in “Game of Thrones” or even in something like “Shot Caller.” Had the film around him been better, then things might’ve turned out differently. Most importantly, dog lovers reading this should skip “Against the Ice” entirely. And honestly, any viewers besides diehard Coster-Waldau fans might as well too.