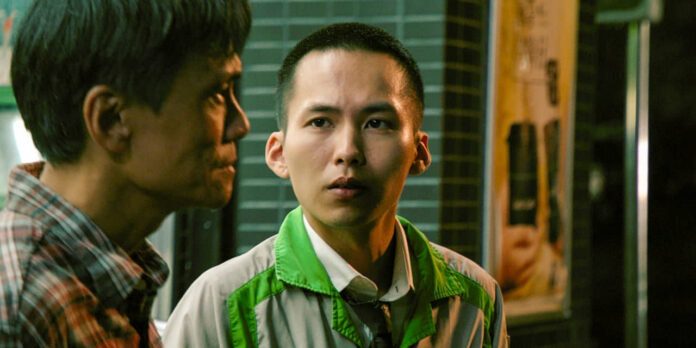 THE STORY – A family of four fractures under the weight of unmet expectations, unexpected tragedy, and uncompromising pride.

​​Chung Mong-Hong’s “A Sun,” Taiwan’s submission for the 2020 Oscars, begins by putting its best foot forward: its cinematography. The rain-soaked gravel reflects the city’s neon lights with stunning clarity, showing us every color of the rainbow, surrounded by black. The film’s problems don’t take much longer to make themselves known. We’re barely allowed to revel in the beauty of the gorgeous imagery before the film cuts away to a credit card of white text on a black screen. This happens a few more times – beautiful image, credit card, beautiful image, credit card. As a simple, treacly acoustic guitar melody plays, we watch as two men ride a motorcycle in the rain, their yellow ponchos cutting a striking figure in the darkness before suddenly cutting off a man’s hand with a machete. With its pacing issues, beautiful cinematography, overly manipulative score, unexpected story directions, and even-handed direction, this opening sequence encapsulates nearly all of the film’s biggest strengths and weaknesses, all of which will remain for the next two and a half hours.

Perhaps the film’s biggest hurdle is its somewhat uneasy marriage of family drama and crime drama. The young man who was with the perpetrator of the opening dismemberment is named A-Ho. After his father tells a judge that he hopes the judge sends him away for the discipline he and his wife were unable to give him, A-Ho is sent to juvenile detention. “A Sun” follows the family in the wake of this, as one thing leads to another and their lives become more and more tenuous. The first half of the film is slow and intensely focused on character. Scenes unfold in the manner of so many slice-of-life films, patiently watching the story unfold in a way that undercuts the melodrama of the plot (one painfully unfunny scene with a sewage truck aside). A-Ho and his family are now living very different lives and are basically in two different films. The balance between the two feels ever so slightly off, something that gets worse in the film’s second half when A-Ho is trying to make a new life for himself out in the world. As his past catches up with him and he gets pulled back into the criminal world, his storyline becomes more entwined with the family storyline, and the film feels even more unbalanced than before. The family drama’s subtlety and care don’t mesh well with the crime drama, which feels underbaked. The lack of energy in the even-handed direction doesn’t help, either.

The family drama does work well, though, thanks to the strong performances of the cast. Chien-Ho Wu is fantastic as A-Ho, bringing a bone-deep disappointment to every move he makes, embedded in him by a father who expected too much, even when his fierce animal instincts take over. Yi-Wen Chen brings a staunch matter-of-factness to his performance as the family patriarch, one that gets slowly eroded throughout the film as he is forced to grapple with a world becoming more morally grey than his black-and-white worldview allows. As the matriarch, Samantha Shu-Chin Ko is often painfully still as life sends her reeling from one roadblock to peace after another. The whole cast is doing great work, with Kuan-Ting Liu a stand-out as the imposing Radish, A-Ho’s friend who cut off the hand in the opening scene. He’s the one performer that brings forward momentum to the film, which otherwise leisurely walks through its scenes. The characters rarely let their emotions out in full, lending the film a touch of remoteness that makes the deliberate pacing a hindrance.

Unfortunately, the pacing of the film leaves something to be desired. Pauses come at odd places, and we often watch characters wordlessly, stoically react to things for a beat or two too long. This doesn’t have to be a problem, but in a film that’s two and a half hours long, these periods of dead space add up, leading to a film that feels like it is longer than it has to be. “A Sun” certainly has an engaging story to tell and frequently uses stunning imagery to tell it. But those sustained pauses end up having the opposite of their intended effect because of that slight remoteness of the performances; instead of making us feel the characters’ emotions more deeply, we end up feeling less. When the ending finally comes, and with it a somewhat surprising emotional turn for one character, it’s more impressive as a feat of writing than as an impactful moment of emotional storytelling. Like the star it’s named after, “A Sun” burns bright, but it’s too far away to keep us warm.