“A HOUSE MADE OF SPLINTERS” 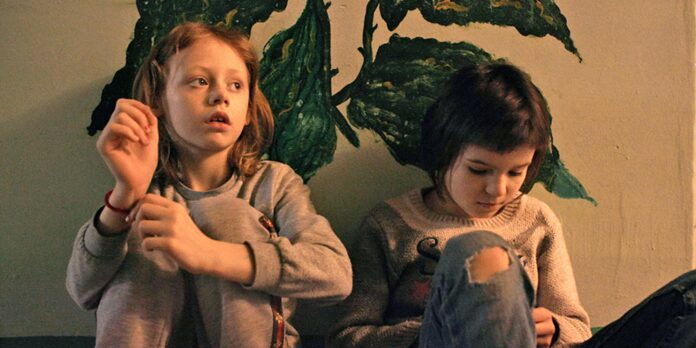 THE STORY – Children and staff in a special kind of home: an institution for children who have been removed from their homes while awaiting court custody decisions. Staff do their best to make the time children have there safe and supportive.

The devastating effects of war on a particular area can be catastrophic in immediate and subtle ways. Obviously, the direct human loss is the most tragic consequence of such conflict, but in that wake are countless citizens whose lives are also upended by such a chaotic setting. Watching the events in Ukraine play out over the past year has left the world shaken by the display of such brutality and yearning for any semblance of solace for its displaced citizens. “A House Made of Splinters” sets its gaze on a particularly grim set of circumstances that has left many with an aimless direction. The examination is haunting yet optimistic about what tiny slivers of hope can be found.

The aggressions between Ukraine and Russia have made every situation that was already appalling so much worse, and one can certainly see that in the impacted lives of children. The film peers into a halfway house in a small town populated by the young who are in a precarious position before possibly being sent back to their families after a period of evaluation or moved to another facility. For many, this results in either a new foster family or a state-run orphanage. The domestic lives these kids experience is fraught with emotional and physical abuse, and their journey toward stability is a hard road. The cycle seems unending, but there are a fortunate few that can grasp onto a new opportunity. The difficult part is maintaining that resilience.

Director Simon Lereng Wilmont creates an impressive portrait that truly immerses one in this environment. There is a tactile nature to the filmmaking that never imposes itself onto these vulnerable moments but still manages to create an impactful connection. The despair can often feel overwhelming, but it’s in service of providing a full landscape of the trials that must be endured. The longing these children have for a sense of stability is utterly heartbreaking, felt even more deeply given their self-awareness of the burdens they carry. At the same time, the fleeting glimpses of optimism can creep in when the promise of a new family is introduced, and the buoyant delight is a necessary joy to witness. The success stories are limited but serve as a vital punctuation, creating a deeper overview of this harsh arena.

For the more personal stories of those that inhabit this space, the film often presents an incomplete description. There are so many little ones to keep track of, and one would not expect to be able to focus on every single perspective, but the scope loses some fine details in the wider overview. Many make an impression, such as the journey of Eva and her quest to find a home away from her alcoholic mother or troubled Kolya with his hardened exterior masking an insecure and sensitive core. However, they are treated more as vignettes than as main narrative focal points. It’s effective, but the storytelling becomes disparate. This is particularly seen with those actually running this facility, as the administrators are hardly given any identity. It’s understandable to showcase the most affecting aspects, but there is a fascinating story from the viewpoint of the adults here that is missing to forge an even more resonant piece.

Amongst the ever-present disarray and turmoil, “A House Made of Splints” never becomes unbearable to tolerate. There is a delicate touch to the construction of this story that endears one to these plights. The film truly understands the necessity of light amongst the darkness, a sliver of hope that must wrestle against the vast sea of anxiety. Admittedly, one does feel as if this task could be accomplished with a greater sense of context, as some individuals are treated with more emphasis on their experiences than others. It’s a major component that keeps the film from becoming a masterful work, but it still provides a compelling scenery that is deplorable with flickers of realized aspiration. It’s a condition that wartime will always foster, and observing this strife is particularly moving.