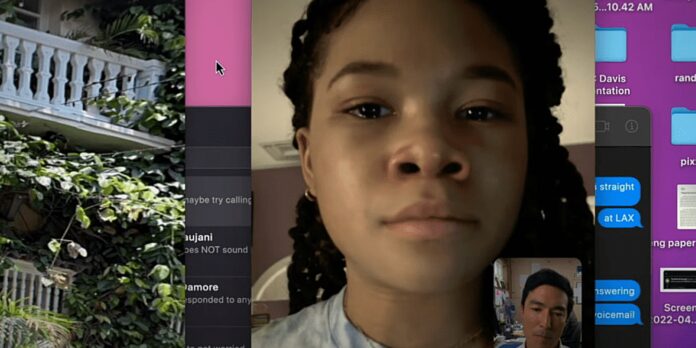 When editors Austin Keeling and Arielle Zakowski heard that 2018’s “Searching,” a film about a father, David Kim (John Cho), looking for his missing daughter, Margot (Michelle La), would be told as a screen film, meaning the action would play out on computer and phone screens, they weren’t entirely convinced it would be an effective storytelling method.

“A lot of people hear the concept of a screen film and immediately just think gimmick,” Keeling said in a recent interview – ironically done via Zoom.

But watching the thriller on the big screen changed that thinking quickly. “Searching” editors Nick Johnson and Will Merrick managed to capture people’s attention and emotions with every text message that appeared on screen, the gripping words of each phone call, and interesting bits of information David found online, all furthering the mystery behind Margot’s disappearance. Keeling and Zakowski also saw what was possible with editing, calling the work “ambitious” and “impressive.”

Fast forward to 2023, and the two are now the lead editors behind “Missing,” a follow-up to the 2018 film, only this time, teenager June (Storm Reid) is looking for answers when her mother Grace (Nia Long) goes missing while on vacation in Columbia. Johnson and Merrick stepped in as directors this time around, while “Searching” directors Aneesh Chaganty and Sev Ohanian served as producers. Assistant editors on the project were Jack McKee, Alison Chang, Jay Sacharoff, and Chris Tennant.

Keeling and Zakowski admitted that there was quite a bit of pressure felt on their shoulders, especially following the critical and financial success of “Searching.” But with the help of many members from the first team, and after two years of constant work, there is a collective amount of pride in “Missing,” which will be in theaters beginning Friday.

“When you’re in it, it can be such a grind, and there were so many years of late nights and crazy hours and all of us working so, so hard that there is something quite emotional in that ending,” Zakowski said. “There’s also a huge relief element of it too.”

The two editors already had an impressive editing resume, working on everything from short films to television series, but “Missing” was among the most unique projects they’ve joined, as well as the most challenging. It forced them to be involved in the production process far before filming ever started, they said and even tested their technological abilities at times. Keeling worked on “Searching” months after it was completed and only “got a little bit of an idea of how complicated the whole thing was, and that was frightening,” he said.

The “Missing” process began in 2020 when they started working on a previz (previsualization) edit in Adobe Premiere before shooting began. Alone in their homes during lockdown, Keeling and Zakowski started building the movie by taking screenshots of various applications, like Google Chrome and Find My iPhone, that a teenager would likely use if they wanted to investigate a disappearance in a foreign country. They also had to factor in how June would appear on screen so that it wasn’t just a view of her computer tabs, and FaceTime video calls came in handy. While working with those templates, the directors supplied the editors with temporary images and videos.

The previz process alone took about six to seven months, which is typically how long it takes to edit a movie.

The editors’ previz project also helped out during the actual filming process. If a Google Chrome window were pulled up on the left side of her computer screen, Reid would be instructed to look in that direction so that everything matched up, they explained.

Once filming wrapped up, Keeling said they received new footage each day and incorporated it into their project using Adobe Premiere. A few months later, they replaced all their temporary graphics with hi-resolution Illustrator files and dialed in on camera and mouse movements.

“It was pixel perfect matching these things that we use every day and making sure that if anyone were to pause and take a look at anything on the screen, nothing would be ringing false,” Keeling said. “People think of screen movies, and they’re like, ‘Oh, you just press record on your computer.’ But there’s so much work that goes into every frame of this type of movie; that’s why it took so long.”

It took so long, they quipped, that Apple updated its operating system three times, and they had to keep updating their graphics. They even joked that they feel like they know the user interface better than the tech company.

Zakowski also hinted that audience members would likely want to watch the film multiple times. As they’re focused on watching the story unfold and tracking characters, Zakowski said, “there are whole storylines going on in the background” that give information about time, places, and characters. If audience members zoom in on desktop notes that June writes, they’ll be able to do some sleuthing of their own.

Even though it took two years of hard work, Zakowski called it all a “labor of love.”

Reflecting on the whole process, Keeling added: “It was incredibly challenging at times because it is so technical and it is so precise, but with the support of this team, it was one of the most creatively fulfilling things that I’ve ever been a part of, and the chance to really bring something to life in a way that you can’t just do necessarily just editing footage in a normal (movie).”

“Missing” is releases in theaters nationwide this weekend. Will you be heading to the theater to see it? Please let us know in the comments section below or on our Twitter account.