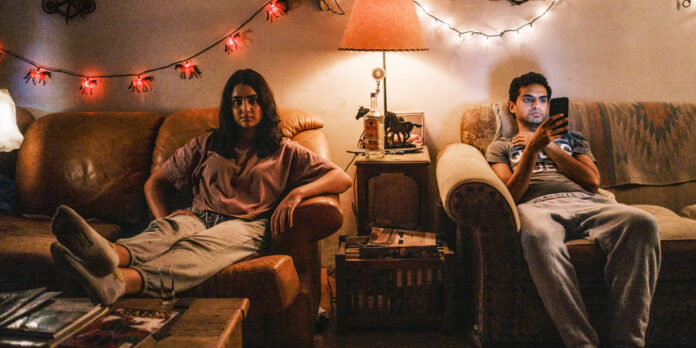 THE STORY – As if their pre-arranged date, organized by their traditional Indian parents, wasn’t uncomfortable enough, Ravi and Rita are forced to shelter in place together as COVID-19’s reach intensifies.

​​​Do you remember where you were when COVID-19 shutdowns were announced in March 2020? Maybe you were already at home, worried about all that was to come and wondering just how long it would take for COVID-19 to go away (spoiler alert: it’s still here). Maybe you were at a grocery store, fighting over that last package of toilet paper or disinfecting wipes, to prepare for the unknown. Or, if you were like our leads in “7 Days,” you were on an arranged date and learning that you were about to shelter-in-place with someone who may or may not be your future spouse. Talk about the longest and wildest first date ever.

“7 Days” is one of many COVID-19-era films that tries to tackle the pandemic that has caused so much pain, confusion, frustration, and fear over the last 18 months. Many of these films have focused on the lighter side, and Roshan Sethi and Karan Soni’s comedy brings us plenty of laughs in its short runtime.

Ravi (Karan Soni) and Rita’s (Geraldine Viswanathan) mothers desperately want their children to get married, and they’ve decided to take it upon themselves to find them their partner. They both have profiles on a dating website, and one day their mothers set up an arranged date between the two. Ravi and Rita meet up in March 2020, with face masks and gloves on, and seem to have a lot in common — they don’t drink, don’t eat red meat or poultry, and are set on having a traditional Indian life together. The date goes well until they receive notifications that a shelter-in-place alert has been issued. With no way to get back home because of a grounded train and no available rental cars, Ravi has to stay with Rita for what initially is overnight but later turns into several days.

At first, things are fine, but Ravi slowly realizes Rita isn’t the girl her profile described her as her home is a mess, there are empty beer bottles all over the place (though she says they’re not hers), she indulges in fried chicken, she loves to swear, and she seems very close to someone named “Daddy” (Mark Duplass). For Ravi, this is a nightmare situation, but it’s not perfect for Rita either. Ravi can’t stop talking about how much he needs to get married and have a family, he doesn’t drink or have any hobbies, and his conversations seem to bore Rita more than anything. But as they spend more time with each other, these two end up forming a bond that gets stronger by the minute. And it proves to be even more important when one of them comes face-to-face with the severity of this new virus.

The highlight of this film is the chemistry between Ravi and Rita, which is captured perfectly by Soni and Viswanathan. There are silly moments, like when Rita adds a bit of whiskey to Ravi’s drink and gets him drunk, and sweet ones, like when Ravi teaches Rita how to cook and pretends to like her awful meal. Soni and Viswanathan play off of each other so well and make every moment delightful, which is precisely what you need when they’re practically the only two people on screen the entire movie. You also feel so attached to them by the film’s end, and you can’t help but root for them.

There are also more serious moments in this film that address arranged marriages, which both of their parents have been in and are still commonplace in the world. Ravi wants to find a spouse quickly and start a family, while Rita calls the practice “psychotic” and wants nothing to do with marriage at all. We even hear stories from real-life couples explaining how they met and often how quickly they had to decide if they would marry the person they just met. You also see how our leads’ mothers are pressuring them in their own ways. While at Rita’s home, Ravi goes on several virtual dates, has a spreadsheet of all the women he’s seen, including their GPA and good and bad qualities, and is constantly discussing these with his mother. Rita says that the only reason she goes on dates is so that her mother will continue to pay for her home. Her mother also reminds her during one phone call, “I hope you didn’t show him the real you. He can’t love that one,” which is definitely a hard pill to swallow. You don’t get movies that address arranged marriages or dive into the many aspects of them, so it was interesting to get these various perspectives and learn more about them.

Despite all the strong suits of this film, it has an awkward third act that takes away the momentum built up between Ravi and Rita. It almost feels like a totally different movie and is so out of place. Additionally, Rita’s character could have used more development. We learn a lot about Ravi and some of the things that make him tick, but we don’t get the same treatment with Rita, who is equally an interesting character. It would have been nice to dig deeper into her relationship with her mother or to uncover her painting hobby, which she tries to hide from Ravi.

There are plenty of COVID-19 movies that will come out and that we’ll likely tire from, but “7 Days” is one that is delightful to watch and has a fun time with the subject matter. Soni and Viswanathan’s relationship is golden, and there’s a lot of great moments on screen. Even though there are flaws with Rita’s character development and the third act as a whole, it’s still a movie that can be enjoyed for years to come as we hopefully move on from this pandemic.