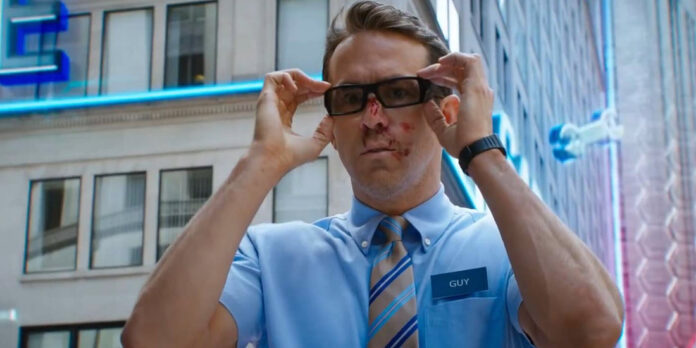 THE STORY – A bank teller called Guy realizes he is a background character in an open-world video game called Free City that will soon go offline.

​​Filmed in 2019 but delayed due to the Covid-19 pandemic, “Free Guy” now releases mere weeks after numerous allegations of abuse against one of the biggest video game studios around, Activision. While “Free Guy” doesn’t have more profound issues in mind, its anti-corporate video game themes are sure to resonate with anyone following the Activision case. For everyone else, though, “Free Guy” is a total blast from start to finish. With creative world-building, it manages to create one of the best video game movies yet.

In Free City, Guy (Ryan Reynolds) lives a carefree life. He wakes up in his bland apartment every day, gets the same hot coffee, goes to his tedious job at the bank, gets robbed at gunpoint multiple times, and is happy as can be. Here’s the bad news: Guy is an NPC (non-player character) in a video game and doesn’t know it. That is, he doesn’t realize it until Millie (Jodie Comer), a real woman playing the game, helps him see who he really is. Millie enlists Guy to help her take down the creator of Free City, Antoine (Taika Waititi), who she claims stole her code and IP.

I’ll just say upfront, the actual plot of “Free Guy” doesn’t make a whole lot of sense. Millie claims that Antoine stole the code for her game and repeatedly says he bought the company from her and Keys (Joe Keery). I’m no lawyer, but I don’t think you can steal something you purchased, right? This is the entire basis for the plot, yet it never really made much sense. That said, “Free Guy” is the sort of movie where the story isn’t nearly as important as how much fun the film actually is. Due to director Shawn Levy’s balance of humor, tone, and visual storytelling, this is where “Free Guy” succeeds.

“Free Guy” is a good time at the movies. It’s full of hilarious and over-the-top video game references and jokes with setup and payoff. Jodie Comer steals the show from Ryan Reynolds, giving arguably a much better performance than was required of her by the material. She’s energetic, charming, and even emotional at times, especially in her scenes with Keery. Ryan Reynolds is, as expected, in full Ryan Reynolds mode with the same dead-pan-with-a-smile, self-deprecating humor that we’ve seen from him dozens of times, but it’s a perfect fit for this ridiculous world. Both a solid action-comedy and rom-com, “Free Guy” prioritizes energy and joy over making perfect sense. This method makes for a genuinely enjoyable movie, even if it might be somewhat forgettable.

The rest of the cast, including Joe Keery and Lil Rel Howery, is vital to the film’s success as well. The only exception is Waititi, who seems completely disconnected from the material as he comes off more annoying than villainous in his over-the-top delivery. Perhaps the writing let him down. Without a logical reason for his criminal behavior, Waititi wasn’t left with much to hold on to other than to go fully overboard with every line delivery and gesture.

Perhaps the most surprising aspect of “Free Guy” is how visually grounded the Free City world is. One might expect a movie that takes place primarily inside a video game to be dripping with visual effects, but this looks far more realistic than some other high-profile releases this summer. While there’s plenty of CGI, of course, there are far more real sets than green-screen backgrounds, along with lots of practical effects and crisp production design. The cinematography is rather bland and even, but its flatness is balanced out by making the video game world feel much more natural than animated with the clever production design and visual effects work.

As Millie tries to take on Antoine’s major video game corporation, she must “wake up” Guy to his reality: that he’s not real, and the world around him is a lie built for entertainment. Sound familiar? This is essentially a video game version of “The Truman Show.” And let me be clear: “Free Guy” doesn’t hold a candle to Peter Weir’s 1998 masterpiece. Still, while Ryan Reynolds may be no Jim Carrey, and the film overall is lacking the same emotional depth as that classic, “Free Guy” manages to have its own existential moments for a whole new generation raised on video game culture online. In fact, there are oddly inspiring messages of being your own person that somewhat took me by surprise, making this more heartfelt than it had any right to be.

It’s been a little while since we’ve had a nice, mindless piece of popcorn entertainment that actually works for the right reasons. “Free Guy” may not necessarily change your life. However, it’s an entertaining two hours in a theater that should give you more than a few laughs and feel-good themes on individuality and finding your purpose.