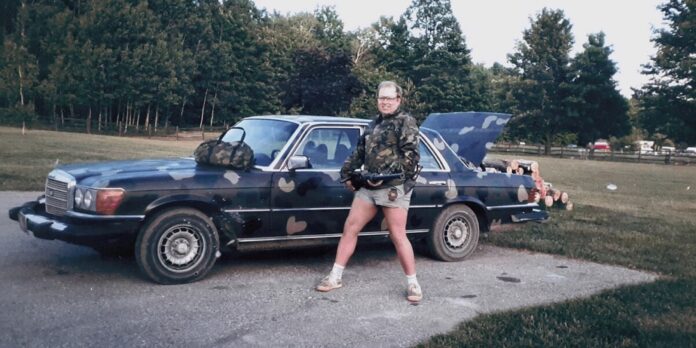 THE STORY – A documentary chronicling the life of Richard Davis, the man who invented the concealable bulletproof vest – shooting himself 196 times in the course of his career to prove the effectiveness of his vests.

Oscar-nominated filmmaker, Ramin Bahrani (“The White Tiger“), makes his documentary debut, tackling the stranger-than-fiction story of Richard Davis, the inventor of the modern bulletproof vest. Davis is a Bond villain for the Trump era. An evil mastermind who also comes across as not exceptionally bright. He proves to be a remarkably open interviewer, allowing Bahrani to weave a compelling story about the toxic side of the American dream.

Bahrani’s eye for narrative filmmaking is apparent in the richly cinematic textures throughout the film. Every interview is impeccably framed and pleasing to look at, as are dramatic recreations of certain critical events from Davis’s past. Of course, even if the filmmaking weren’t engaging, Bahrani could not have asked for a better interview subject than Davis. Davis is open about everything. True, he may play fast-and-loose with the truth when inflating his legend, but what he is honest about is anything that makes him look bad. He almost gleefully talks up the way he propagandized, bullied, and manipulated to secure a personal fortune and throw extra fuel onto the fire of police violence. He admits offering prizes to police officers who killed suspects instead of wounding them.

He’s a madman who shot himself 200 times to prove a point. He’s an idiot who drove his company into ruin. He’s a genius who invented a device nobody had ever thought of before. He’s a mass of contradictions, and he makes you queasy. He broke all the rules, hurt people, and ultimately wasn’t really punished. It’s quintessentially American, and Bahrani recognizes that. Davis has a habit of unwittingly making comments that can be interpreted as withering criticisms about America. Many of his complaints end with, “but that’s America for you,” and the irony is palpable. Davis’s entire story, and the fact that he isn’t in jail and is still making money despite multiple illegal and destructive acts…That is America for you.

Davis amasses something of a cult around himself, even walking customers down the aisle at their weddings. It’s easy to see why Bahrani was drawn to Davis as a filmmaker. Davis made movies too. Tons of them, all glorifying gun violence. The clips of them are riveting to watch for their awfulness and for what they reveal about the filmmaker behind them. Bahrani seems to admire Davis’s chutzpah but, fortunately, does not harbor illusions about Davis’s morality. He bluntly states that Davis produced movies and marketing materials to increase police officers’ own fears to drive sales. And he confronts Davis repeatedly with clear evidence of his untruthfulness. This constant questioning and re-evaluation of Davis’s life story provides the film with some of its most compelling narrative twists. The story of Davis is not only disturbing but also a fascinating mystery.

At the same time, Bahrani does attempt to understand Davis’s formative years. He doesn’t settle for painting Davis as a sociopath but examines Davis’s troubled childhood full of anxieties about his father and how that might have shaped him. Bahrani’s masterstroke comes at the very end, however. He laid clues throughout the film that builds to an absolute gut punch that gives a whole additional context to the film’s title of “2nd Chance.” It’s a sudden transition from focusing so much on Davis to focusing instead on this different angle, but it is so impactful that it balances out. There are flaws, of course. Bahrani could’ve ended here, but he circles back for a weird addendum about how Davis is part of an immortality cult, which is funny but undercuts the emotion of the scene before. And even for a short runtime, the story drags in the middle, even when Davis is so riveting as an interview subject.

Overall, “2nd Chance” is a riveting story about a confusing, disturbing, and harmful man with so much to say about both himself and America’s sins and descent into militarism as a whole. It’s well made and shrewdly structured and might leave you wanting a shower afterward, but you won’t stop thinking about it.