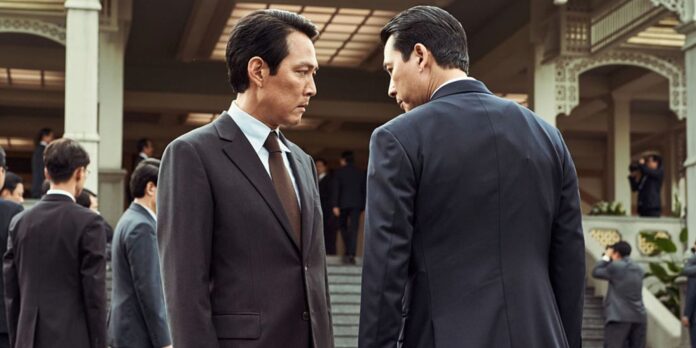 THE STORY – After President Park’s murder in 1980, North Korea sense an opportunity for future invasion and sends one of its spies. Park Pyong-Ho and Kim Jung-Do, two senior security officers, are tasked with the hunting down the infiltrator.

Time can have an indelible effect on how history shapes once-current events. So often, the details and intricacies of happenings can be smoothed over and simplified by being combined with other events that may have occurred around the same time. “Hunt,” the debut film by director-actor (and recent Emmy winner for “Squid Game“), Lee Jung-jae, seeks to dramatize the overwhelming nature of turbulent times. While the opening title card stresses that this is a work of fiction, it’s clearly inspired by actual events that took place in and involving South Korea in the 1980s. The way it morphs these events together creates a tidal wave of political strife that reflects the world-tilting feeling of such times. And while the plot’s twisting nature is compelling, the film is so staggeringly full of double-crosses, plans gone awry, and surreptitious dealings that it’s easy to get lost in the convoluted story.

“Hunt” contains so many layers of deception and intrigue that going into detail about them would take quite a while. In the broadest sense, the film is about two government agents seeking to expose a North Korean mole who has infiltrated their intelligence agency. The two men – Park Pyong-ho (played by the director himself) and Kim Jung-do (Jung Woo-sung) – eventually uncover a plot to assassinate the South Korean president.

It doesn’t take long before the film develops a pattern in its storytelling. “Hunt” vacillates between dense dialogue scenes – wherein numerous revelations are constantly being made – and much more visually dynamic set pieces. The latter is always either a thrilling action sequence or a harrowing, unrelenting torture scene. The action scenes are undeniably exciting, featuring explosive gunplay and car stunts. The firearm work is particularly impressive, thanks in no small part to the immaculate sound work. The film’s sound team does a spectacular job using varied and well-mixed bullet sound effects, which helps keep the audience on edge.

But even within the film’s more visceral, exhilarating moments, the reasons why the characters are doing what they’re doing are sometimes indiscernible. The story is so filled with ideas, names, and shifting loyalties that even with the film’s robust length, it can sometimes feel as though it’s about to burst because it’s so packed with information. At a certain point, trying and keeping track of every character’s motivation and allegiance becomes unmanageable. It’s simply easier to focus on other characters’ reactions to revelations and use that as a cue for how to feel moment to moment. It could possibly be argued that the unwieldy nature of the screenplay reflects how the governmental figures who populate the film get so bogged down in the paranoid details of who is doing what and why that they can lose focus of why exactly they’re in their line of work. But even still, the film invites frustration just as much as fascination.

It’s difficult to reconcile the unquestionably thrilling sections of “Hunt” with its ultra-confusing plot. The jolts of energy are occasionally enough to stimulate the audience to remain captivated, but it’s hard not to want to give up entirely at a certain point.

<b>THE GOOD - </b>Dynamic action sequences give the film a thrilling energy throughout the lengthy runtime.<br><br> <b>THE BAD - </b>The plot is so convoluted that it's nearly impossible to keep track of all the double dealings and shifting allegiances.<br><br> <b>THE OSCAR PROSPECTS - </b>None<br><br> <b>THE FINAL SCORE - </b>5/10<br><br>"HUNT"