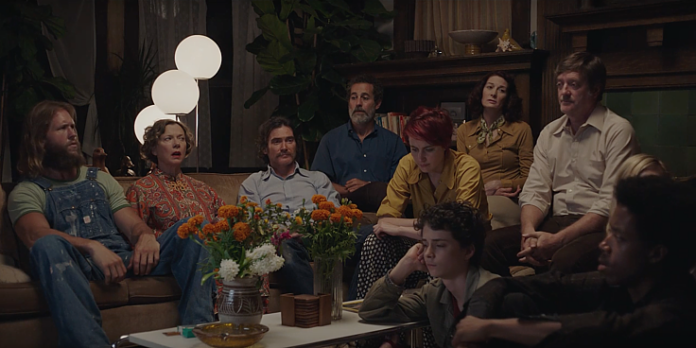 THE STORY – In 1979 Santa Barbara, Calif., Dorothea Fields is a determined single mother in her mid-50s who is raising her adolescent son, Jamie, at a moment brimming with cultural change and rebellion. Dorothea enlists the help of two younger women — Abbie, a free-spirited punk artist living as a boarder in the Fields’ home and Julie, a savvy and provocative teenage neighbor — to help with Jamie’s upbringing.

Since 2017, a certain film has continued to capture the hearts of cinephiles and modern audiences alike. 20th Century Women contemplates how we as humans struggle with how we’re perceived by others, and who we actually are. Some characters stay in a state of surface-level performance, adapting to how society and specifically men see them, while others embrace that “otherness” and bathe in the idea of seeming free and passionate. At some point in the film, though, each woman the film focuses on – and the men that accompany their stories – bare their souls to us beautifully. From a single mother to a punk artist, the film showcases multifaceted women who writer-director Mike Mills crafts with dignity and firsthand insight.

20th Century Women takes place in 1979 and follows Dorothea Fields (Annette Bening) as she tries to raise her teenage son Jamie in the boarding house she runs. On the short cusp between adolescence and adulthood, Jamie isn’t the easiest child to raise, which causes Dorothea to reach out to Abbie (Greta Gerwig) – an artist staying with the Dorothea – and Julie (Elle Fanning) – Jamie’s closest friend – to help raise him. As these relationships grow closer, each of these characters – along with another tenet of Dorothea’s, William (Billy Crudup) – form a futile bond that will last with them forever.

While all these characters seem wildly different, they bond over the fact that they all seem lost within the world. They each worry about how they’ll be perceived by society and grapple with the fact that, in the end, that may change the way they perceive themselves. While the film seems like it will be about Jamie, it’s not. Rather, he serves as a piece in a puzzle that connects with Dorothea, Abbie and Julie, allowing the viewer to get a solid look into the world of the three women who are trying to raise him. As women, these three characters have adapted to play a role, and while sometimes the performances they put on get in the way of the actors’ true work, Bening, Gerwig and Fanning deliver career-defining performances. Bening, specifically, is a standout, playing Dorothea with an unwavering sense of pride and devotion to her son.

The film’s technical elements add to its lush story as well. Colors breeze by and are harnessed to create a portrait of 1979 Santa Barbara, transporting the audience into its quiet beauty and the city’s vivid art scene. There’s a specific scene in which Abbie takes Jamie to a club and it’s like you can feel the heat inside the room and hear the music pulsating from the speakers. When the two listen to music in Abbie’s bedroom, it’s like Mills has transported you into the room with them, and it’s almost impossible not to join their frantic dance party. The music in the film, soundtrack and score alike, also adds an immense amount of life to it. Composer Roger Neill’s track “Santa Barbara, 1979” is a whimsical melody of strings and synthetic keys, which makes the setting of Santa Barbara feel like a paradise. Neill’s score is accompanied by songs by Talking Heads and Devo, which only add to the liveliness of the film’s story.

Mills has since described the film as a “love letter” to the women who raised him, and that’s just what 20th Century Women is: a love letter. Each aspect of the film feels as if Mills is bearing his soul to the viewer, and asking them to join him on a trip down memory lane. Sharing parts of ourselves as intimate as our childhood and family isn’t an easy thing to do, and for someone to do it so elegantly is a feat within itself. The people who make an impact on you when you’re young, no matter how small that impact, will stick with you until remembering them isn’t something you can do anymore. As the film ends, and these characters tell us about where they end up and how their stories end, you can’t help but feel you’re saying goodbye to friends: People you’ve met briefly, but who made an impact on you, even if it was only for two hours of your life.