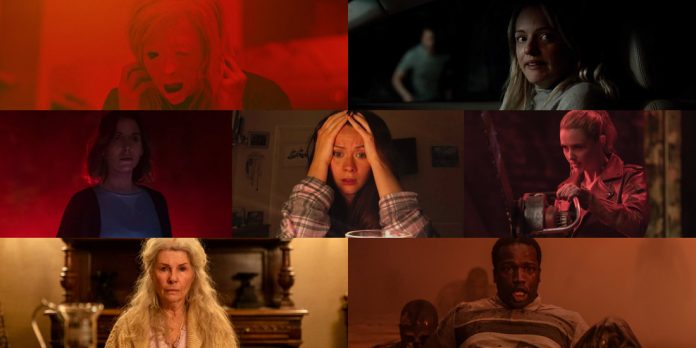 By Cody Dericks
​
In a year that was rocked by a deadly pandemic, horrifying moments of racial injustice, and political turmoil that seemed to rot the brains of those around us, 2020 had enough real-life horror that it might’ve seemed to eliminate the need for fictional scares. But 2020 was not lacking for good horror releases. While it may have been an unusual year for film releases, it’s still a year worthy of examination when it comes to the horror genre

​Perhaps the most curious aspect about this year’s horror releases was, for obvious reasons, the lack of big studio films. There was nary a franchise release, with the latest entries from the “Halloween,” “Saw,” and “The Conjuring” universes pushed to 2021. The only true major studio horror film was Leigh Whannell’s reimagining of “The Invisible Man.” It managed to sneak into cinemas just before the pandemic necessitated the closure of theaters and was, for many, myself included, the last film they got to see outside of their homes. And now that the year has passed, it remains one of the better horror films released in 2020. Anchored by an incredible performance from the queen of stress, Elisabeth Moss, it’s an effectively chilling tale about the power of fear. There were a few other big studio releases in 2020, like “Freaky,” “Underwater,” and “The New Mutants,” but those were genre-mixing hybrids rather than the pure horror of “The Invisible Man.”

The most unique aspect of horror is that, unlike most genres, there are two ways in which a film can be considered a success. One is to be a genuinely good movie, and the other is to be truly scary. Unfortunately, these two qualities are not always found in the same film. Plenty of horror movies can be good but not scary and vice versa. In the case of “Host,” the tiny, pandemic-set movie from Shudder, both are true. The film tells the story of a group of young women whose weekly Zoom call goes wrong when a medium-led seance takes a dark turn. It is genuinely the scariest film I saw this year that shows the danger of not listening to experts on dangerous subjects, a lesson that many could have used this past year.

A few other 2020 releases stand out in terms of scare factor, although they are not as entirely effective as movies in general. “The Lodge” is a creepy, unsettling story about the many different forms of manipulation with a fairly unsatisfying conclusion. “The Dark and the Wicked” comes to us from Bryan Bertino, the director of the legendary modern hit “The Strangers.” It features some incredible tense sequences and truly scary moments, but it also has a final act that somewhat deflates the entire film. “Come Play” is a classic monster story updated for the modern technological age and its early sequences of suspense are genuinely terrifying in the way it builds dread before the villainous creature is even seen. But, as is typical of some horror movies, the latter parts of the film that are more beholden to typical storytelling beats pale in comparison to its mysterious early sections. The funny thing about lackluster horror movies that somehow manage to frighten is that I would still recommend these films to anyone looking to be scared. Sometimes, all a horror movie needs to be somewhat successful are two or three scary sequences.

Throughout film history, some of the best horror movies operate in the realm of political allegory. From the white villains fetishizing Black bodies in “Get Out” to the paranoid worldview of “Invasion of the Body Snatchers,” horror is a medium in which artists can hold a mirror up to society and show our monstrous, twisted world and two of 2020’s best horror movies do just that. “La Llorona” is the latest film to explore the legend of the weeping woman. But instead of telling the folk tale in an exploitative, misogynistic way, director Jayro Bustamante turns it into a haunting and empowering story of holding those in power accountable. It tells the story of a Guatemalan dictator who may just escape legal consequences for his genocidal past. He and his family are stuck inside their homestead while protestors make themselves known night and day just outside of their abode. Matters settle into a surprisingly normal routine until a young, new worker named Alma arrives and mysterious events start to take place. Similarly, “His House,” tells the story of the long-lasting effects of a brutal regime as it follows Bol and Rial, a refugee couple who have fled South Sudan for England and are doing their best to assimilate into the culture of their new home. But the past will not stay in the past and they’re haunted by increasingly more volatile spirits who serve to remind the pair of what it took to escape from their homeland. It is harrowing, effective, and unquestionably the best horror movie of 2020.

With most of us stuck inside while a volatile world seemed to crumble around us, it’s not too surprising that some of the most notable horror releases of the year were unendingly bleak. The gory and thrilling “Possessor” shows the ways that every workplace intercepts your mind until you are no longer the person you thought you were. “Relic” personifies the way that dementia can seemingly turn a loved one into something unrecognizable. “Alone” is a relatively hopeless and relentless story of one woman’s quest for survival while being pursued by a maniac. And “Sputnik” is a typically dour Russian story about a space monster that feeds on human fear. If you were looking for escape in this disaster of a year, these films were not the place to turn.

Mixing horror and comedy is always a tricky task. Too much emphasis in either direction and the result is usually a film that is neither funny nor frightening. But there were a few films this year that walked the tricky genre tightrope successfully. The most notable of the bunch is “Scare Me,” which is a stripped-back, postmodern examination of the very act of storytelling. It is, impressively, both funny and tense in equal measure. “Bad Hair” is a satirical look into the world of corporate bigotry and the hoops that Black women are forced to jump through in order to get even a scrap of recognition. Its scares are goofy beyond belief, but it still manages to be solidly entertaining. “Freaky” is an enjoyable romp that harkens back to the self-aware slashers of the 90s. It’s both light in tone while also featuring some truly gnarly kills. And “Uncle Peckerhead” is a ridiculous movie set in the world of amateur metal bands. It is silly, unpolished, and a whole lot of fun.

Besides all these overall satisfactory films, there are other 2020 horror films that feature specific elements that are worthy of recommendation. “Run” is centered around two amazing performances from Kiera Allen and Sarah Paulson. “The Other Lamb” has stunning cinematography, including a jaw-dropping dolly zoom that might just be the best use of the camera technique that I’ve ever seen. “The Rental” is buoyed by a magnetic supporting turn from Alison Brie. “Followed” is a low budget found footage horror-comedy that still manages to give some solid scares. And “Gretel & Hansel” is, ultimately, fairly hollow but its design elements are undeniably beautiful. The parts are greater than the whole with these films, but as is true of all except the most poorly executed examples of the genre, these horror films are still worth checking out for the aforementioned exemplary elements.

2020 will forever stand as one of the strangest years in film history and it was no different for the horror genre. But as it always has, horror both survived and thrived. It’s one of the oldest and most resilient genres of storytelling, capable of molding and changing to fit the fears of the present day, and that will continue to be true in 2021 and beyond.

What were some of your favorite horror movies from 2020? Let us know your thoughts in the comments section below or on our Twitter account.