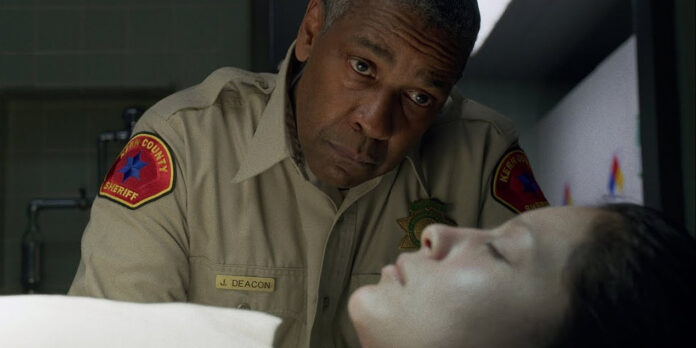 THE STORY – Deputy Sheriff Joe “Deke” Deacon joins forces with Sgt. Jim Baxter to search for a serial killer who’s terrorizing Los Angeles. As they track the culprit, Baxter is unaware that the investigation is dredging up echoes of Deke’s past, uncovering disturbing secrets that could threaten more than his case.​

​Certain stories have the ability to become an utterly transfixing experience that is exciting to watch unfold. The act of seeing a compelling narrative being assembled that becomes an enticing display of intrigue is easier said than done. When it’s successfully executed, the results can be engrossing entertainment and compelling storytelling. However, one could just as quickly end up with a product that is grating and ineffective in its presentation and leaves one with a hollowness that oddly can turn into resentment for such wasted opportunities. “The Little Things” aims to tell such a tale, yet what is delivered is a mostly hollow affair that struggles to become engaging.

Denzel Washington stars as Joe “Deke” Deacon, a deputy sheriff in 1990 Los Angeles. He attaches himself to an ongoing case in which a serial killer is stalking in the area. He forms a partnership with Detective Jim Baxter (Rami Malek) and both become consumed with the ensuing investigation with the incessant need to find the culprit. Eventually, their paths cross with Albert Sparma (Jared Leto), an oddball loner who confirms every instinct of suspicion except hard evidence. That does not throw Deacon or Baxter off his trail, eventually leading to confrontations that will reveal dark secrets from the past.

Upon the film’s immediate start, one becomes blatantly aware of how monotonous the tone is and how it fuels a frustratingly dull pace. John Lee Hancock directs this material with such a lethargic style that it’s difficult for any sense of momentum to build within this story. There is a slight turning point nearly halfway through the picture in which some sequences of tension are better conceived and executed to his credit. The whole thing still falls victim to uninspired filmmaking choices that range from mundane cinematography and a dull, repetitive score. The worst offender is the awkward editing that punctures nearly every scene with either a disorienting sensation or sluggish progression.

Hancock’s screenplay is an even worse element, trying hard to subvert expectations of what previous crime dramas have done in the past without ever committing to a plot that feels all that inviting. The construction comes across as haphazardly assembled without much incentive to become invested with rather stale characters. One can appreciate the seldom attempts to give the dialogue a quippy flare that would infuse the work with some personality, but most of the time, one is treated to shallow philosophical ramblings that don’t illuminate much on the subject of these morally ambiguous observations. Simply put, the writing makes an effort to craft an intriguing mystery but ultimately fails under the weight of lifeless individuals and a mostly banal drama.

It’s obvious that Washington has proven himself to be one of the finest American actors to ever grace the screen, but it must be noted that he gives a genuinely uninspiring performance here. It’s challenging for him to completely suppress his natural screen presence, but that charisma is deeply subdued in a turn that ranks closer to merely serviceable. The same could be said for Malek, who is astoundingly unremarkable save for a few moments near the lackluster conclusion that’s carried by glimpses of internalized emotions. Surprisingly, it is Leto who stands out as best in show, giving off an effectively creepy energy that works well for the role. It’s a bit too stylized at points, but there is a magnetism to his portrayal that is intriguing to witness. This is one of the rare occasions where his off-putting eccentricity is a value to the character he portrays and not a burden.

Even though similar methods may have been well-received in the past, there was still potential for “The Little Things” to discover ways that would lend itself to be more innovative with its storytelling. Instead, it relies on stilted filmmaking and a tiresome script as the foundation to a plot that wrestles with finding a captivating premise to explore, despite the occasional beats that manage to grasp some success. However, the performances are unilaterally unimpressive, with the notable exception of Jared Leto, who does his best to convey all of the interesting choices one could make with playing such uninteresting characters. There will always be a space for fascinating mysteries to watch, but that is nowhere to be found here.