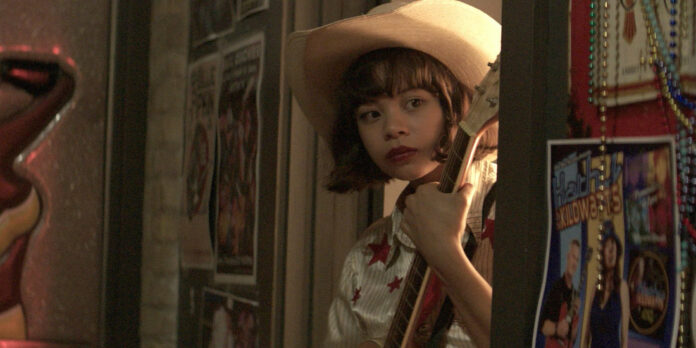 THE STORY – A high school senior falls in love with a new transfer student who hides a heartbreaking secret.

10/9/2020
​By Nicole Ackman
​
​Patriotism and the love for your home are popular themes in country music, so a film about an undocumented immigrant fighting to stay in the United States and pursue a country music career makes more sense than you might initially think. Broadway star Eva Noblezada makes her film debut as 17-year-old Rose Garcia, an undocumented immigrant from the Philippines who has grown up in the United States and wants to be a country music star. The film, written and directed by Filipina-American Diane Paragas, is a beautiful ode to the many immigrants from the Philippines in the United States but also to all those who make sacrifices for a chance to attain their dreams.

Rose lives in Texas with her mother (Princess Punzalan), who is concerned about being deported after the death of Rose’s father some years before. The two share an easy affection between them, but Rose is also a typical rebellious teenager who wants nothing more than to experience the country music scene, play guitar and write music and hang out with her classmate Elliot (Liam Booth).

When her mother is taken into ICE custody, Rose must find her way on her own. The film flits back and forth between Rose as she attempts to remain in the United States, first staying with an aunt and then at a country music bar in Austin, and her mother in a detainment center. Rose is lucky to find kind people who are willing to help her, but the threat of an ICE raid hangs over throughout the film. While many people are familiar with ICE from hearing about it on the news, the tension that the film builds around scenes involving them is chilling.

Paragas has been working on “Yellow Rose,” her narrative film directorial debut, for many years. She previously directed a documentary called “Brooklyn Boheme,” along with some shorts and television work. This film is well-shot, particularly the concert scenes, and feels very raw and genuine. The script, co-written by Annie Howell, may move too swiftly at times, but it’s necessary for the story Paragas is telling.

Noblezada made headlines for her portrayal of Kim in “Miss Saigon” in the West End and on Broadway and more recently, for starring in the Broadway hit “Hadestown.” The two-time Tony Award nominee is both charming and heartbreaking as Rose. Her emotive, straightforward performance carries the film. She is able to bring across Rose’s despair at her situation but also shows the ways in which she is a normal 17-year-old girl. She has the voice of an angel, making the music scenes some of the best in the film.

Another former Kim in “Miss Saigon,” Lea Salonga has a brief role as Rose’s estranged aunt. While it’s only a small part, Salonga is an iconic Filipina actress so her involvement feels special. (And, yes, there is a scene in which she sings.) The other standout performance of the cast is country singer Dale Watson playing himself as Rose’s eventual mentor. He plays the gruff older mentor figure well and also wrote some of the music for the film. “I Ain’t Going Down” and “Square Peg” are easily some of the best songs to come from any 2020 film and sounds like real country music, escaping the cliché country music sound sometimes heard in films.

“Yellow Rose” is part coming-of-age tale, part immigrant story and part country music Western. It could easily have been dark and depressing, but it’s surprisingly cheerful at times and even uplifting. Yet, it maintains its honesty about the reality of what undocumented immigrants in the United States face and how the system fails them without becoming too bogged down in the legalities. It’s an impressive narrative film debut from Paragas and a fantastic film acting debut from Noblezada. But most importantly, “Yellow Rose” is the sort of story that deserves to be told but is rarely seen on film.