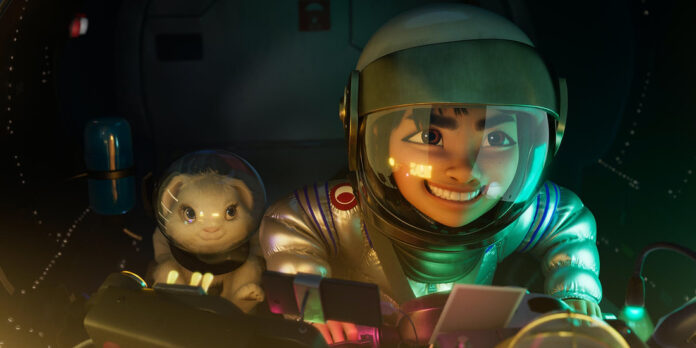 THE STORY – An adventurous girl builds a rocket ship to meet a mythical goddess on the moon.

​​I haven’t cried in the first ten minutes of an animated film since “Up” was released in 2009, but “Over the Moon” now shares that distinction. This beautiful tale directed by animation legend Glen Keane is one of Netflix’s latest offerings and is a tale of loss and love. With lovely songs, gorgeous animation, and a touching story, it takes a Chinese legend and folds it into a modern story about a young girl desperate to hold onto her love for her mother. It’s so charming that audiences are sure to be “over the moon” for it.

The film follows Fei Fei (Cathy Ang), a young Chinese girl whose parents run a business making mooncakes. After her mother passes away, Fei Fei struggles to cope with the idea of her father moving on. Plus, the woman her father is seeing has an annoying young son who seems determined to make her life more difficult. Worried that her father is forgetting the great times that they had with her mom, she decides to build a rocket to take her to the moon to meet the moon goddess that her mother told her so much about: Chang’e (Philippa Soo). The film certainly plays into some well-known tropes, but it comes together in an original and exciting way.

One of the best things about the film is how it manages to weave in Chinese traditions and culture, from a beautiful stylized sequence telling the story of Chang’e to the depiction of the Mid-Autumn Festival. The screenplay by Audrey Wells is a great mix of touching moments (like when Fei Fei curls up with her mother’s scarf) and humor. The film is dedicated to Wells, as she passed away from cancer in 2018 just before the release of her last movie, “The Hate U Give.”

The film has an all Asian voice cast including well-known talents like Sandra Oh (“Crazy Rich Asians“), John Cho (“Searching“), Kimiko Glenn (“Spider-Man: Into The Spider-Verse“), and Margaret Cho (“Bright”). Ang is the perfect actress for the role of Fei Fei, who manages to be a feisty girl talented at science without veering into the STEM-girl stereotype we see too often. Robert G Chiu does a great job as Chin, Fei Fei’s younger brother-to-be, who just wants her to acknowledge him as a future sibling. Ken Jeong also stands out as Gobi, who is a typical sidekick character but whose humor is effective.

One thing that sets “Over the Moon” apart is its great soundtrack which ranges from musical theatre-esque songs that move the plot along to pop-EDM songs, all written by Christopher Curtis, Marjorie Duffield, and Helen Park. The songs suit the gorgeous voices of the cast well. Broadway performer Ruthie Ann Miles is particularly great as Fei Fei’s mother and original “Hamilton” cast member Soo is fantastic as Chang’e. The moving “Rocket to the Moon” is the obvious standout (and the song likely to be nominated at the Oscars). Aside from its soundtrack, the film also has a fantastic and emotional score by Steven Price.

The film’s computer-animation bears a resemblance to Pixar animation, with vibrant colors and a mix of realism and a more flashy style. There are a few different styles of animation used throughout in storytelling sequences, and the part in which she studies and researches how to build her rocket is particularly cute. Other highlights include the cooking scenes and the moon scenes that mix an accurate representation of the planet with playfully designed creatures.

All of the beautiful animation and music come together to make “Over the Moon” something truly magical. From its loving treatment of Chinese culture and myth to the way it tells a familiar story of a child dealing with their parent moving on but in a fresh way, it is certainly something special. But what’s most touching is the way that it deals with grief and loss. In this time of crisis around the world when many people are experiencing losing a loved one, this film is sure to touch people’s hearts.