“THE WOLF OF SNOW HOLLOW” 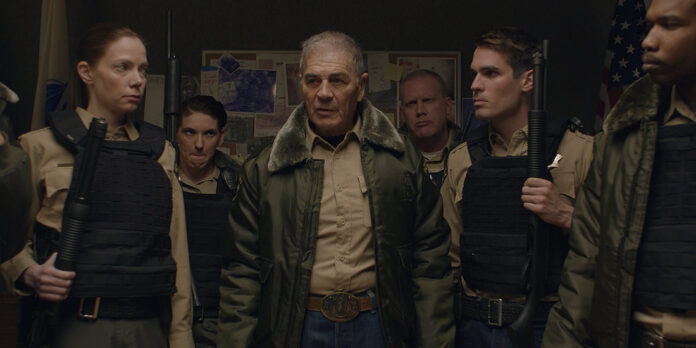 THE STORY – A stressed-out police officer struggles not to give in to the paranoia that grips his small mountain town as bodies turn up after each full moon.​

​Arriving just in time for the Halloween season is “The Wolf of Snow Hollow,” a new take on the werewolf subgenre. The horror-comedy is directed and written by Jim Cummings following the success of his indie hit, “Thunder Road.” The film follows John Marshall, a police officer investigating a group of grizzly murders targeting women in small-town Snow Hollow, Utah. Whisperings around the town suspect the murders could be supernatural. (Perhaps a werewolf?) John and his father, Sherriff Hadley (Robert Forster in his final film appearance), intend to find whatever is disrupting the town and bring it to justice. But John is facing his own set of problems as he tries to balance the case, keep his sobriety tact, and raise his 17-year-old daughter after a failed marriage. He has to face his inner demons to solve this case and help Snow Hollow.

The wintry small-town feel present in “The Werewolf of Snow Hollow” has shades of “Fargo” with a hint of “Zodiac,” but most of all, Cummings crafts an indie horror flick of his own style. Instead of being strictly a creature feature, the werewolf serves as a symbol for toxic masculinity in many forms. The killer attacks women only, preying on them when they are alone, proving that internalized misogyny runs deep. It’s not just the killer on the loose, but John who battles his own inner demons of anger, alcoholism, and rage. He states at an AA meeting, “Don’t let the monsters inside of you come out.” His struggle with his own monsters takes center stage throughout the film as he attempts to investigate the mysterious “wolf” of Snow Hollow and stay sober.

Cummings, who directs and stars in the film, has a distinct style that is unafraid to blend dark humor with comedy. As John, he swings between moments of irritation and desperation with the hope that he can solve the case. He fears for the safety of his daughter and the health of his father. However, there’s a simmering rage bottled up that unravels with each passing moment the killer remains on the loose. Cummings sprinkles in moments of wit and humor that add to the character, but there are times that John’s outbursts get a little too unhinged and turn into Dennis Reynolds-style meltdowns.

The film is a bit of a whodunit mystery, so it’s important to have a strong ensemble to keep you on your toes. The supporting cast does great with their material. Robert Forster (who the film is dedicated to due to his death) is the Sherriff who can’t let go of his job even though his health is on the line. Ricki Lindhome is Julia, John’s co-officer. She investigates the case carefully at every turn, prepared for whatever is thrown her way. Jimmy Tatro (who is a hilarious character actor) shows up as PJ, a visitor to the town when the murders start occurring, but he doesn’t get a whole lot to do. I wouldn’t have minded seeing even more of the supporting cast in the film, however, this is a protagonist vehicle so I understand the ensemble takes a back seat to the lead.

The mystery and humor certainly keep the viewer’s attention, but the drastic tonal shifts are difficult to ignore. One moment, the tone goes for laughs, and the next, John is relapsing after a tense fight with his daughter. The shift from comedy to drama sometimes works, but it often feels like whiplash, especially considering the movie is so short.

“The Wolf of Snow Hollow” is a spooky horror-comedy capturing the nightmare of small-town terror and toxic masculinity. Although I would have liked to see a more balanced tonal structure from the film, Jim Cummings proves himself as an indie director who has a bright future ahead of him.