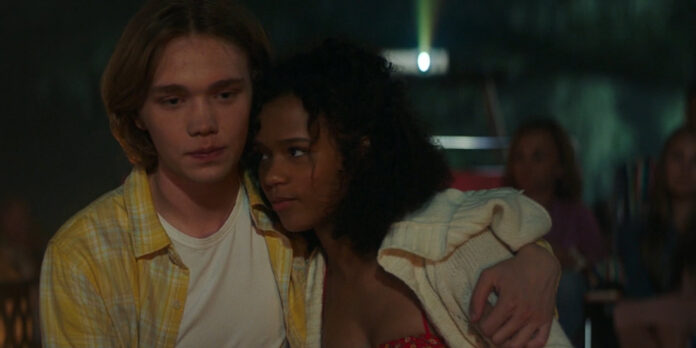 THE STORY – Diagnosed with a mental illness during his senior year of high school, a witty, introspective teen struggles to keep it a secret while falling in love with a brilliant classmate who inspires him to open his heart and not be defined by his condition.

​​​​​At this point, there are certain conventions about how to portray schizophrenia onscreen. Namely, personifications of the whole “hearing voices” thing. But it’s disingenuous to boil down the mental illness to that one characteristic. Schizophrenia manifests in many other ways, including delusions, disorganized speech, reduced motivation, diminished feelings of pleasure in everyday life, and difficulty with processing information. New teen lit adaptation “Words On Bathroom Walls” strikes a decent balance in portraying a fuller range of the effects of schizophrenia than we usually see in films, although it still sticks with the established conventions.

Our protagonist is Adam (Charlie Plummer), a high school student with aspirations to become a chef. Unfortunately, halfway through his senior year, he gets diagnosed with paranoid schizophrenia, which manifests itself in some truly terrifying hallucinations, as well as three voices in his head (given physical form by AnnaSophia Robb, Devon Bostick, and Lobo Sebastian). Determined to give him as normal of a life as possible, his mother (Molly Parker) enrolls him in a Catholic school and an experimental drug treatment. Like most teens, Adam just wants to be normal and tries his best to hide his illness. But a budding relationship with his classmate and math tutor Maya (Taylor Russell), his mother’s announcement that she and her boyfriend (Walton Goggins) are having a baby, and some serious side effects from the drug treatment make it more and more difficult.

Far and away the best thing about “Words on Bathroom Walls” is its treatment of Adam’s illness. Nick Naveda’s screenplay and Thor Freudenthal’s direction make it painfully clear that this is not a typical obstacle for our teenaged hero to overcome, but a serious condition that makes every aspect of life difficult, at a time of life that’s already difficult enough. As the lead, Plummer has moments of overacting that threaten to turn the film into a melodramatic teen version of “A Beautiful Mind.” Thankfully, the script is at its best when exploring how Adam’s illness affects the relationships in his life and Plummer is excellent in those scenes with Parker, Russell, and Andy Garcia, giving a sensitive turn as a kindly school priest who Adam turns to for guidance.

Unfortunately, the film never quite manages to balance the mental illness storyline with that of Adam and Maya’s romance. A heartbreaking standout in last year’s “Waves,” Russell is a warm, perceptive presence here and finds ways to give Maya more of a personality than the screenplay does. She and Plummer have good chemistry, too, which makes you root for them even through the film’s discordantly upbeat ending. But their relationship is never where the film’s heart is at, which leaves the romance feeling sadly underbaked.

Still, the overall quality of the filmmaking helps put the film over. Freudenthal’s stylish direction saves many scenes from feeling too cliché, especially the scenes with Adam’s hallucinations. The cinematography by Michael Goi works especially well with effectively-used visual effects that bring us inside Adam’s head. In the moments when the film is focused on Adam’s headspace and how it affects his life, “Words on Bathroom Walls” is effective and lets us into a world we haven’t really seen before. Had the filmmaking been stronger outside of those moments, it could have been something really special, but instead, it’s just good.