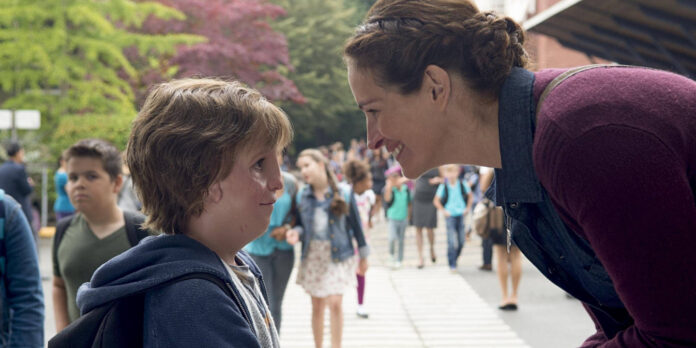 THE STORY – August “Auggie” Pullman is a young boy born with a facial deformity who has been in and out of hospitals for years. With the help of his mother, Isabel, and his father, Nate, he tries to fit in at a new school, Beecher Prep, and to show everyone he is just an ordinary kid and that beauty is not just on the outside.

​I know what you’re thinking. How the hell does a cynical movie reviewer with a taste for nihilism, violence and super dark themes actually come to like and appreciate a sappy children’s drama? Six words: I love all types of movies. Ok, enough with ripping off dialogue from “The Founder.” But seriously, I went into “Wonder” expecting a manipulative drama that would unfairly tug at the heart strings and be filled with corny plot points and cheesy dialogue/acting. While this is true at certain times, writer/director Stephen Chbosky (“The Perks Of Being A Wallflower”) never goes overboard with the manipulative storytelling devices nor does he inject the story with a dark twist that will have you bawling out your eyes for weeks. Instead, we are treated to a modern film on child bullying, with some terrific lessons for both parents and children that never comes across as preachy but instead strikes a perfect balance.

Taking place over the course of one year, “Wonder” follows 10-year-old August “Auggie” Pullman (Jacob Tremblay), a young kid who loves Star Wars, has a loving family and enjoys everything a typical 10-year-old enjoys. He is finally attending school for the first time after being homeschooled all his life by his mother (Julia Roberts). Unfortunately, his mother and father (Owen Wilson) are very concerned for their son to be attending school due to his birth facial deformity that has resulted in 27 reconstructive surgeries and a face that one would not consider normal. Auggie does indeed face bullying due to his appearance while his older sister Olivia “Via’s” (Izabela Vidovic) friendship with her best friend takes a downturn after returning to school from the summer. “Wonder” shows us glimpses into the two children’s lives at the school where they face everyday pressures, highs and lows, and friendships (Both new and old).

Jacob Tremblay dazzled us all with his performance in 2015’s “Room” and then proceeded to take a step backward with this year’s “The Book Of Henry” (Although, much of that blame goes elsewhere instead of directly at Tremblay). Now, with “Wonder” the still only 11-year-old actor shows us that he is not just another cute kid but that he is capable of giving other remarkable performances. How he will fare as he gets older remains to be seen, but right now, Jacob Tremblay is America’s sweetheart child star and rightfully so. Not since Macaulay Culkin charmed us with his performances in the 90’s has a child actor been so affecting with his sheer acting ability, voice and look.

It’s funny that I should say look, seeing as how in “Wonder” Tremblay is covered in prosthetics for the entirety of the film. However, “Wonder” is about looking past what is on the surface and seeking to understand people. On the surface, each one of the characters in “Wonder” may or may not be going through something and one of the wisest storytelling decisions that Chbosky utilizes is to allow characters other than Auggie, the spotlight. With their own moments of voiceover and their own points of view (Mandy Patinkin’s Principal Tushman even has a line of dialogue about there being two sides to every story), “Wonder” feels expansive in understanding the humanity of its characters, thus allowing it to sell its themes better by providing more variety to the viewer. Chbosky’s one fault is that not all of these storylines receive their proper due outside of Auggie’s. However, most viewers will not be paying attention to most loose threads and will instead be sucked into the emotion of the story through its characters and relationships.

Everyone in “Wonder,” including Julia Roberts, Owen Wilson and especially newcomer Izabela Vidovic, all have their moments and they all do a fine job. This film won’t be receiving any ensemble of the year awards but it’s nice to see that no one stands out as being lesser than the rest. The character relationships, the nostalgic feeling of being back in school where bullies were seemingly everywhere as much as the next random act of kindness and especially the heartwarming performances help to make “Wonder” a surprisingly great life lesson for both parents and their children. This should be mandatory viewing for all children under the age of 10 so that they may witness what true kindness looks like and hopefully, in turn, learn how to treat others. Everyone, no matter who you are, is fighting a battle that we cannot see. We can see Auggie’s battle and it’s because of him, that we are reminded of how we should truly be.