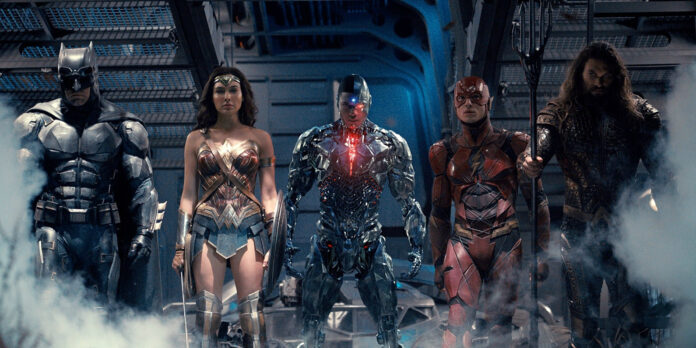 THE STORY – Fueled by his restored faith in humanity and inspired by Superman’s selfless act, Bruce Wayne enlists newfound ally Diana Prince to face an even greater threat. Together, Batman and Wonder Woman work quickly to recruit a team to stand against this newly awakened enemy. Despite the formation of an unprecedented league of heroes — Batman, Wonder Woman, Aquaman, Cyborg and the Flash — it may be too late to save the planet from an assault of catastrophic proportions.

Zack Snyder’s “Justice League” is a massive improvement from his previous projects such as “Man of Steel” and “Batman V Superman: Dawn of Justice.” While DC still proves to be its own worst enemy when it comes to their films, “Justice League” still manages to take a few steps in the right direction. “Justice League” is not atrocious but it is not groundbreaking either. Instead, it finds itself somewhere in the middle, making for an enjoyable superhero movie on the surface but something a little more disappointing once you begin to dig deeper. All in all “Justice League” is not the biggest let down of the year which is actually somewhat satisfying considering the sorry state that DC and Warner Bros. have found themselves in with this film franchise.

After the death of Superman (Henry Cavil), Bruce Wayne (Ben Affleck) begins to assemble a team of super humans to help defeat the upcoming threat to humanity. The team is made up of Wayne himself, Wonder Woman (Gal Gadot), The Flash (Ezra Miller), Cyborg (Ray Fisher), and finally Aquaman (Jason Momoa). The team joins together in order to take down Steppenwolf (Ciaran Hans), the destroyer of worlds. Steppenwolf is an evil being who is seeking to take over Earth and destroy the plane altogether. The plot of “Justice League” is definitely recycled and one we have heard of before (“The Avengers” anyone?), making it the weakest point of the film.

DC seems to be constantly trying to fill their suitcase with as much luggage as possible before the latches break. Each story that DC chooses to tell are notable ones but they do not take their time with them. Instead of taking the time to develop the plot or the characters across their own separate films as Marvel did, they seem to just rush through the story so that they can move on to their next phase of movies. They want to introduce more and more characters while at the same time giving us reasons to not care. DC seems to be a studio that wants to have their cake and eat it too and while their audience does not seem to be a fan of the method, “Justice League” is yet another signal that they are not going to change nor stop.

DC has a lot of interesting characters in their back pocket, including some they have not even discussed yet. But since they chose not to take their time in developing these characters and “Justice League” is burdened with only a two-hour running time to give characters such as Aquaman, The Flash, and Cyborg their debuts, we do not have any sort of emotional attachment to them. We’ve seen a hell of a lot of Batman and Superman but do we actually know them? Clark Kent and Bruce Wayne act more as centerpieces for the franchise, figures to marvel at in all of their grandeur, instead of actual fully developed characters in their own films.

We do connect with some of the characters in the Justice League versus the entire league is a whole. The film tries to utilize its ensemble for the greater good but actually ends up highlighting just a few characters in the long run, whether its the brave and fearless leadership role that Wonder Woman takes on (Fans of “Wonder Woman” will be happy to know that Gal Gadot is just as tremendous as she was earlier this year in her own standalone film) or the innocent youthfulness that is seen within The Flash. Both these two characters actually show some sort of emotional reaction to the events happening in the film. They have the most heart and soul, making them the easiest to connect with as characters.

As for the other members of the team, they prove to be somewhat hollow. Batman and Superman still have the same problems they suffered in “Batman V Superman: Dawn of Justice” (Surprise! Superman is back!) which isn’t surprising when you consider how close together these two films were put into production and shot, and all by the same director, Zack Snyder. Aquaman is a cocky hothead who is just entirely unlikable. The next closest character that we try to connect with is Cyborg. He’s an interesting character that battles with his own demons while also trying to decipher what is happening in the real world. The easiest solution to this problem of juggling so many characters is taking more time. “Justice League” is constantly trying to rush through scenes and events that we never spend more than a few small moments with the characters. This includes all of the moments that are meant to feel emotional or heartwarming. As was the problem with “Batman V Superman: Dawn of Justice,” after “Man of Steel,” we needed a standalone Batman film, then the showdown between him and Superman, then standalone films for Wonder Woman, The Flash, and Aquaman, until we got to “Justice League.” Instead, here we are, and DC has been trying to play damage control ever since.

Despite this one major flaw in the film, “Justice League” is actually enjoyable in some bits. The action has moved away from just throwing people through buildings into some actual squabbling. From the tactics that The Flash uses in terms of disorienting his enemies, to Wonder Woman’s Amazon training that leads to some more creative action techniques, the fights prove to be more enjoyable on a level of pure spectacle but are still just as hollow due to the lack of stakes and emotion. Those stakes never actually feel high and the tension never feels real as we know that after Superman was killed off in “Batman V Superman: Dawn of Justice” that DC has now shown their hand and will not try to play that trick again. We don’t ever fear for the heroes when they are in a fight, we are simply just watching them to admire the choreography, editing and special effects on display.

“Justice League” is an orgy of images that manage to entertain us on a spectacle level and nothing more. While the film takes a lot of hits in its storytelling department, it still happens to be charming from time to time. Thanks to the assistance of mainly Wonder Woman and The Flash (Ezra Miller seems like he’s the only one having fun most of the time) the film does hold small moments of playfulness and sensation that are enjoyable. While the storytelling does not fall as fae in line with its predecessor, DC has still not fully found its footing. They keep trying to shove a lot of different elements into their films within such a small amount of time, maybe they should just take their time and focus on their characters and the standalone films instead (It worked wonders for “Wonder Woman“). “Justice League” is not quite on the level of being a disappointment, but it also does not land in the same realm of Patty Jenkins’ “Wonder Woman” either. But with only two hours and half a dozen new characters to introduce, was it ever even possible?

The Next Best Picture Podcast · "Justice League"
Powered by JustWatch
Share
Facebook
Twitter
Copy URL
Previous article
Surveying The Oscar Field – Who Is Still In The Hunt For The Best Actress Oscar This Year?
Next article
“Justice League” And The Difficulty Of Shared Universes