Will The Lack Of The Golden Globes Awards Affect TV Shows This Year? 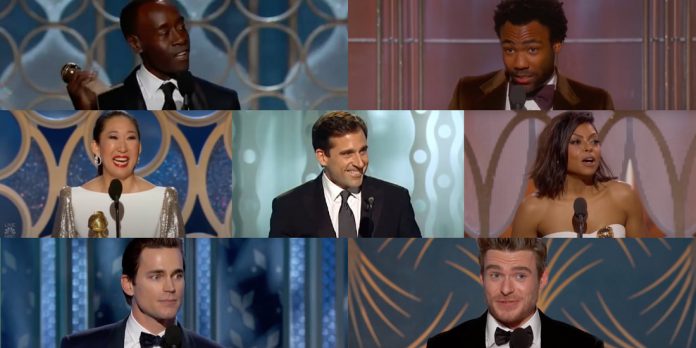 Now that the dust has settled and every outlet has had their chance to take pen to paper over the many failings of the Hollywood Foreign Press Association with their lack of diversity and NBC’s justified cancellation of the Awards ceremony, let’s pause and take a look at what this will mean for the television shows that would’ve competed at the 2022 ceremony.

What the Golden Globes have accomplished for shows still trying to find audiences or bringing in new viewers is second to none. Think of what might have happened to the quirky one-hour comedy “Ally McBeal” that was still trying to find its audience when the Globes bestowed it with Best TV Comedy and its star Calista Flockhart with Best TV Comedy Actress in 1997. What about the massive new audience the shocking 1996 Best TV Drama winner “Party of Five” received when it defeated “E.R.” in an upset? What about the little-seen British Comedy “The Office” and its star Ricky Gervais which also picked up Best TV Comedy and Best TV Comedy Actor in 2004? Gervais seized the moment by giving a memorable acceptance speech, and since the UK version of “The Office” was not eligible at the Emmys, this was the only award the series would receive. Fast-forward to 2015 when Amazon’s “Transparent” won Best TV Comedy, and the streamer decided to celebrate the victory by allowing everyone to watch the series for free, bringing in a new audience to not only the series but the new streamer. The same can be said for Donald Glover and his series “Atlanta” in 2017, bringing in new viewers to the basic cable series.

Just because the Golden Globes need to make changes should not take away the good they achieved by giving these shows a boost of momentum in their early years. The Emmys may have their own biases when it comes to which shows they award. For example, they have consistently ignored the series and stars of both the CW and Starz networks, making the Golden Globes their best chance at any recognition. Two of the CW’s innovative female-driven comedy series took home Best TV Comedy Actress in back-to-back years for Gina Rodriguez (“Jane the Virgin,” 2015) and Rachel Bloom (“Crazy Ex-Girlfriend,” 2016). The Starz Network’s cult-favorite “Outlander” and star Caitríona Balfe are definitely grateful to the Golden Globes as they’re the only significant award recognition they’ve received thus far in their seven-year run.

The Golden Globes have also corrected the Emmys’ mistakes or awarded performers who would never win an Emmy for their series run on more than a few occasions. In 1995, the HFPA awarded a teenage Claire Danes with Best TV Drama Actress for “My So-Called Life.” The Emmys may have nominated her, but she walked away empty-handed every time. The Emmys were too busy awarding the supporting actors of “Modern Family,” but the Globes singled out Chris Colfer for Best TV Supporting Actor in 2011. The Emmys also never got around to awarding scene-stealer Kim Cattral for her supporting work in “Sex and the City,” but the Globes did in 2003. The Emmys also overlooked both Drew Barrymore for “Grey Gardens” and Kevin Bacon’s work in “Taking Chance.” Still, the Globes definitely got it right when they respectively won for Best TV Mini/Movie Actor and Actress respectively in 2010. Matt LeBlanc and his heightened performance as himself in “Episodes” may have gotten him Emmy nominated again, but it was the Globes that appreciated the performance enough to award it. It shocked many when Matt Bomer left the Emmys without a trophy in 2015 for his astonishing wok in “The Normal Heart,” but the Globes definitely got it right by awarding him Best TV Supporting Actor.

Hopefully, the Hollywood Foreign Press can make the necessary changes and improvements to allow the award show to continue in the future. A lot of television series have used this platform as a launching pad to find the viewers they’re desperately seeking to stay on the air. Also, think about perennial nominees Steve Carrell (“The Office”) and Hugh Laurie (“House”), who were never able to take home an Emmy for their iconic performances but did each win a Globe or two. But on the positive side, if the Globes do not take place in 2022, no one will be subject to the Globe + SAG Award Curse-since that assumingly good combination usually doesn’t end with an Emmy win. Will their absence color that perception this year? Or will it be a non-factor? What will this mean for dominant shows such as “The Crown,” “Ted Lasso” and “The Queen’s Gambit?” What about newer shows such as “Hacks” or “Made For Love?” And of course, there are all of the shows which haven’t premiered yet and will have to rely on other organizations such as Critics Choice and SAG to receive a boost next fall. There are lots of questions and not many answers as we’re heading into some unknown territory here.​

Do you think the absence of the Golden Globes will have an impact on many shows looking to find an audience this year? Do you think another show will step up to give television shows a boost this year in the awards season race? Let us know your thoughts in the comments section below or on our Twitter account.