Why “Wonder Woman” Should Be Nominated For best picture 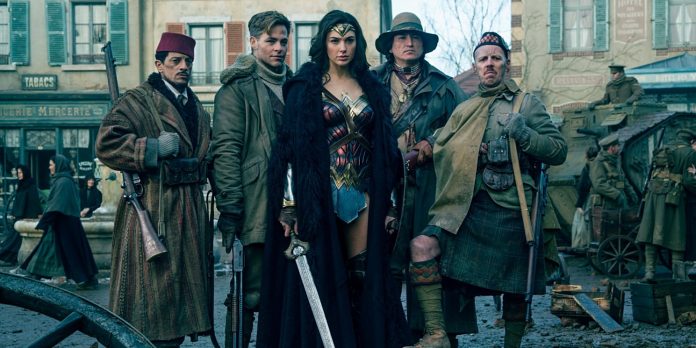 When it comes to Oscar watching/predicting, the online community lives in a dichotomy. On one hand, we love the familiarity. There is something satisfying in watching the events of the awards season play out and see our educated guesses come true (“I told you so!”). On the other hand, it is easy to get bored with predictability and we long for true surprises. Yes, it is exciting following an Oscar race without a frontrunner, but true excitement would come in of the following statement: Best Picture Nominee “Wonder Woman.” ​

Warner Bros’ rolled out their FYC website and the usual suspects are there. “Dunkirk” will be their big player, the studio is hoping for another “Mad Max: Fury Road” in the form of “Blade Runner 2049,” and it is looking like Batman will be in the Oscar race this year (albeit in his LEGO form). The only other film on their FYC website is Patty Jenkins’ superhero epic, and all signs are pointing towards a true Best Picture campaign for DC’s leading lady.

It is best to talk about “Wonder Woman’s” Oscar chances in two categories: the “optimistic” category and the “extremely optimistic” category. Make no mistake, this will be a steep uphill battle for Warner Bros’. Whether it be the movie’s early release on the genre bias that has become associated with the Academy, there is no obvious path to see “Wonder Woman” join our expected Oscar contenders. Even while recent years have seen blockbusters like “Mad Max: Fury Road” and “The Martian” become Best Picture nominees, neither is an apt comparison for WB’s ambitious plan this year.

In the “optimistic” category, what many pundits would say is “Wonder Woman’s” best day on nominations morning, here’s how it could shake out. It is completely possible to see WB go gangbusters with the campaign this Fall and see “Wonder Woman” all throughout the techs. Visual Effects, Sound Mixing, Sound Editing, Costume Design and Makeup/Hairstyling could be real nominations for the movie (and possible wins if WB plays their hand right). The other nomination that would bring happiness to the film community worldwide would be that of Original Score. People love the “Wonder Woman” theme and it is instantly iconic.

But Warner Bros’ isn’t looking to run a full fledged Oscar campaign just to pick up some nominations below the line. As Variety reported earlier this Summer, they are aiming big and it looks like they will be spending the money to back up their goals. This is where we leave the “optimistic” category and step into the “history-making” category. After passing on 2008’s “The Dark Knight,” we mustn’t underestimate the task of getting a superhero film nominated for Best Picture.

So what does “Wonder Woman” have that “The Dark Knight” didn’t? Well, we needn’t look any further than the actual name of the movie itself. If there was ever a year to rally behind women in Hollywood, 2017 would be that year. Going back to Variety’s reporting from the Summer, a specific section stood out to me all these months later. Speaking of Warner Bros’ expected campaign, Ramin Setoodeh wrote,

“The studio’s efforts will include reintroducing the film this fall, to scarce few who may not have seen it. Insiders report strong reactions to the screening of “Wonder Woman” at the Academy, as it’s been championed by a liberal Hollywood and a reinvigorated wave of feminism in response to Donald Trump.”

Make no mistake, we can definitely make Oscar predictions using “the current political climate” as a point of reference (looking at you, “The Post”), but nominating “Wonder Woman” has the capability to say more than “we don’t like who is in the White House.” Hollywood has their own Donald Trump, and his name is Harvey Weinstein.

With the public unveiling of Weinstein’s true nature, we have seen him fired from the company that bears his name and his Academy membership revoked. Women (and men) all across the industry are going public with their stories of sexual harassment and assault, and many are hopeful that real change is brought to this industry we all love. Whether it be fans receiving harassment from Screen Junkies’ Andy Signore or our top actresses going on the record with their Weinstein experiences, 2017 has proved to be a horrifying year for women involved in the movies, and it is time for true reform to be made real.

With an over $800 million box office haul and a 92% rating on Rotten Tomatoes, “Wonder Woman” could join the ranks of “Inception” and “Avatar” as a blockbuster that broke into the Oscar race. Yes, the Oscars serve as a vehicle to praise some great movies each year, but they have always been political in nature (studios are spending money to earn people’s votes after all). I say if you are going to be political, then just own it and be political.

​Make a statement this year.

Not only is “Wonder Woman” a great blockbuster and it would be nice to see the variety amongst the nominees, but “Wonder Woman” presents the opportunity to show the changing mindset within Academy voters and an opportunity to make a statement. As far as Hollywood goes, 2017 will be known as the year a major Oscar player was revealed as someone who used their power to harass women. That doesn’t have to be Hollywood’s future. Here is hoping that “Wonder Woman” breaks as many records as possible and women in film can see a true win in 2017.