Why Has Netflix’s “Tiger King” Turned Into A Cultural Phenomenon? 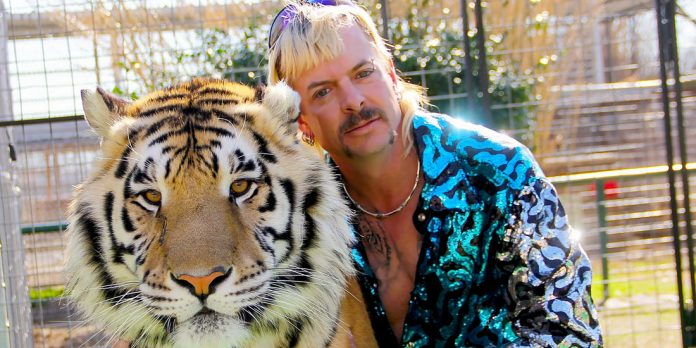 If there was any doubt that Netflix’s runaway hit documentary “Tiger King: Murder, Mayhem, and Madness,” would become a cultural touchstone, that question was answered a few days ago on MSNBC when California Sen. Kamala Harris, after a discussion of a possible new economic stimulus bill, was asked by the host how she has passed the time while she has been confined at home. Sen. Harris didn’t miss a beat when she breathlessly asked: “Have you seen ‘Tiger King’?”

The lightning-in-a-bottle success of a documentary mini-series about a collector of big cats running a zoo of sorts in a small Oklahoma town has given millions of Americans, many of whom are sheltered at home, scared, concerned or just plain bored, the chance to talk about something else besides the 300 lb virus in the room. The unlikely focus of their fascination is Joseph Maldonado-Passage, who has reinvented himself as Joe Exotic, the gay, pistol-wearing owner and operator of G.W. Exotic Animal Park in Wynnewood, OK, where he oversees hundreds of tigers and other exotic animals.

Joe, in addition to breeding tiger cubs for profit or using those cubs to take lucrative photos of tourists posing with them, actually wants to be a TV star and hires veteran reality show producer Rick Kirkham to do just that. But Joe’s higher media profile brings his operation to the attention of Carole Baskin, owner of the Tampa-based Big Cat Rescue, a group that ostensibly rescues tigers and other big cats from unscrupulous owners.

Joe Exotic isn’t the only notorious big cat collector. Bhagavan “Doc” Antle and his three (or four or five) wives operate a 50-acre animal preserve in Myrtle Beach, CA, as well as Tim Stark, who runs an Indiana roadside zoo. Carole has her bullseye on Joe because of his public resistance to her animal rescue campaign, but Carole has a few skeletons in her own closet that are about to be unearthed.

Directors Eric Goode and Rebecca Chaiklin have made “Tiger King” to be the documentary equivalent of a “page-turner.” Just before the final credits of each episode, they have the skill to detonate a revelation that causes the viewer to say “…huh!?” And given Netflix’s structure, the next episode pops up in 20 seconds after the last episode ends, so who wouldn’t want to stay tuned to find out what happens? It’s the key element to the addictive quality of the mini-series that keeps America buzzing about it.

Addictiveness aside, is it any good? Is it a real documentary? I would say, yes, as it falls securely in the genre of docs whose filmmakers start to film one story but uncover facts that lead them to an entirely different place. “Capturing the Friedmans” (2003) and “Three Identical Strangers” (2018) are prime examples of the form, and the pivot that Goode and Chaiklin have to make in adjusting their story from a contained look at snake handlers to this larger crazy world of big cat collectors is deft and on its own quite remarkable.

However, there’s a disturbing undertone to much of “Tiger King” in its subjects’ exploitation of both animals and people. Though she projects herself a the savior of tigers, Carole nonetheless keeps them in cages far too small for them to move comfortably. Joe, for his part, snatches tiger cubs shortly after they’re born from their mother so that he can profit off them. Worse, perhaps, is their exploitation of people. Joe collects men off the streets for his staff and pays them a pittance. Carole doesn’t pay her devoted volunteers at all, and Doc collects his most attractive female volunteers to join his harem. All of this contributes to an ick factor around “Tiger King” that catches in your throat every time that you’re tempted to laugh at the jaw-dropping goings-on.

Still, while you may hate yourself in the morning for liking “Tiger King,” I’ll bet when you wake up, you’ll want to watch the next episode and the next and the next.

Have you seen “Tiger King” yet? If so, what do you think of it? Are you going to watch the new episodes Netflix is airing soon in the coming days? Let us know in the comments section below or on our Twitter account.