Why “Dune” Should Win best picture 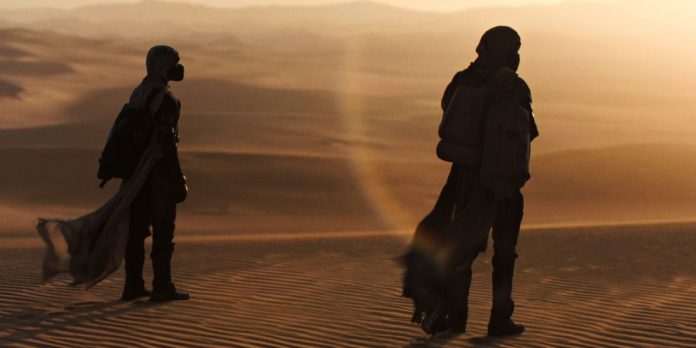 Last year, the Best Picture lineup and eventual winner “Nomadland” highlighted the strengths of filmmaking during the pandemic era. Not only did the themes of films such as “Nomadland” relate to the isolation and loneliness that people went through during that year, but the films that were nominated mainly were independent films filled with personal stories. In a standard Oscar year, you would not see the likes of “Sound of Metal” or “Minari” cracking the Best Picture lineup. However, with theaters reopening in 2021, this is the year to honor the blockbuster and celebrate the cinematic experience. While some may say that it was the return of franchise films like James Bond’s “No Time to Die” and the MCU’s “Spider-Man: No Way Home” that got people back to the big screen, it can be argued that it is Best Picture contender “Dune” that celebrates the art of going to the movies and spending nearly three hours immersed in intense storytelling and spectacular visuals.

“Dune” is a film that has been embraced by not only the Academy, with the ten nominations it received but across the board. Winning three Critics’ Choice Awards, five BAFTAs, and one Golden Globe, Denis Villeneuve’s film is regarded as a technical masterpiece. Adapting a text that was deemed by many to be impossible, Villeneuve created a world that was not only easy to follow and understand but hard to resist. When it comes to rewarding “Dune” on Oscar night, it is currently favored to win six of the ten awards it is nominated for, and quite a few of them are undoubtedly heavy frontrunners.

Breaking down the categories that “Dune” is nominated for, it’s safe to predict it will win for Visual Effects and Sound. On top of that, the film is in the frontrunner position for Score, Production Design, Cinematography, and Editing. Out of the ten nominations it received, it can be put first for five of the awards. The visual effects in “Dune” are leaps and bounds above any of the other contenders this year, and the same goes for the sound work. Hans Zimmer’s score is his best in several years, while the editing by Joe Walker is what helps keep the story flowing and the viewer immersed in the world. The fifth category that could be awarded to “Dune” goes to the coveted Best Picture category.

“Dune” is a personal favorite film of mine from 2021 and for many others as well. It is astonishing to be able to tell a story like this and make it as digestible as it is. Every minute of storytelling is used to its highest potential, both narratively and visually, bringing these insane concepts like the Sandworm to life. Many people have concluded that “Dune” will not be the Best Picture winner, and yet there are two main reasons against this.

The main argument that many present is one that is reminiscent of “The Lord of the Rings” franchise, particularly with the Oscar haul of “The Return of the King.” It is known that the Academy waited to reward the franchise until the final part of that story was told, and using that logic, doing the same for Part Two of “Dune.” Firstly, we can’t be sure that Part Two will honestly conclude the “Dune” franchise like “The Return of the King” did for “The Lord of the Rings,” as there is still so much text by Frank Herbert left open for adaptation. If it turns out Part Two is not the final “Dune” film in Villeneuve’s filmography, will we still be awarding him for it? If it is the concluding chapter and it is the moment to reward him, 2023 is already proving to be a stacked year for potential Best Picture contenders. Most notably, Christopher Nolan’s “Oppenheimer” is penciled in for a 2023 release, and given the subject matter and casting, you can never write off a Nolan film being a major contender.

The Academy liked “Dune,” and that’s clear from its ten nominations. However, the shocking omission on Oscar morning was Denis Villeneuve in the Best Director lineup. He was considered by many to be in the runner-up position behind “The Power of the Dog” director Jane Campion, and Villeneuve has been the face behind not only the film but embracing the cinematic experience that comes with a film like “Dune.” The franchise has become a passion project for Villeneuve, and it feels strange that a film that performs this well across the entirety of award season and will win the most Oscars at the end of the night will show no recognition for its director. If the Academy were to award “Dune” Best Picture, Villeneuve would walk away with an Oscar with a producer credit on the film he lovingly crafted.

As film fans and Oscar pundits, we have become obsessed with narratives and finding specific reasons for films to win the big prize. However, what should really matter is whether the best film won the award. If you want to try to say that the film that will possibly win the most Oscars, and that has had a strong showing across a large majority of the guilds, is not worthy of being crowned the best film of that year, it’s safe to say that you are crazy. Yes, you can reward Villeneuve and the franchise with Part Two, but you can also just reward “Dune” with the Best Picture prize this year as it deserves.

How many Oscars do you think “Dune” will win? Do you think the Academy will go wild with rewarding Part One or hold off more until Part Two is released? Check out our latest Oscar predictions’s here and let us know in the comments section below or on our Twitter account.