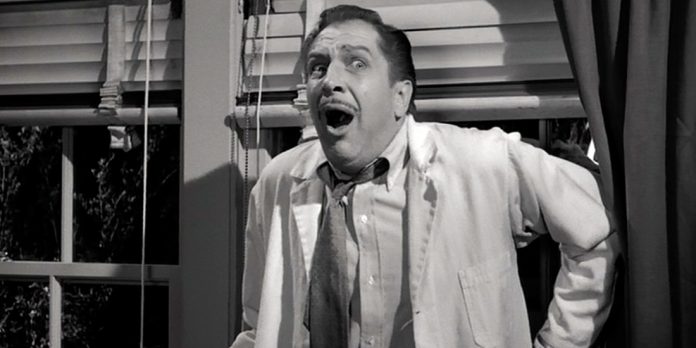 Every lover of film has a particular entry point that kickstarted their passion for the art form. The gestures can be grand or small, but there is always some kind of origin point that can be traced back. For myself, old school horror and science-fiction films were a big part of my early cinema education. These classic films were a favorite of my parents, and as a child with a burgeoning interest in the world of movies, it became a regular bonding experience to connect with them. There are so many that I could not possibly name everyone that has meant so much to me, but there is one particular film that is celebrating its sixtieth anniversary, and I felt compelled to discuss a film that’s meant so much to me.

​Released on July 1959, “The Tingler” is the type of high concept horror film you would expect from this decade. Vincent Price stars as a scientist who is obsessed with all things macabre, as would certainly be expected. Here, he is a pathologist who has a great fascination with the study of fear. Ultimately his research leads him to discover a living organism that exists inside the body, a giant, worm-like creature (the titular role, as it were) that grows against the spine whenever a person becomes consumed by fear. Eventually, they are able to extract this beast and it is soon set loose on unsuspecting victims.

To watch horror films from the 1950s is to understand the context in which they were made. None of these films strive for any kind of realism, but that is precisely what lends them their charm. Of course, the science behind the film is not meant to be realistic, but that is precisely why it’s so entertaining. These films are marked by a fantastical element that perfectly suits the time when audiences were becoming fascinated by the landscape born out of the atomic era. General audiences didn’t completely understand the science but were fascinated by the speculated consequences.

Unlike many of its contemporaries, “The Tingler” doesn’t directly tie itself to the themes of atomic mutation, but it plays on the outlandish theories associated with them. It takes a rather mundane phenomenon and morphs it into a terrifying monster. Does the creature ever look like anything more than a huge, rubber slug? No, but realism isn’t the path to enjoyment. This film is in the grand tradition of solid ‘B-pictures’, and to watch Price, the king of these genre films, deliver all his lines with every bit of charming screen presence is quite an enticing thing to watch. I’d wager that for most of us, hearing Price orate the phone book would be more than sufficient to qualify as good listening.

There is another element to this film that makes it quite endearing, and that is its director. William Castle built his career on making the kinds of horror films that played well to audiences looking for a good scare. However, Castle was always a creative thinker and heavily employed gimmicks to make an even greater impression on those who would watch his films. Previously, he had resorted to such stunts as handing out life insurance policies before screenings and having wired ghosts fly out from the corners of the actual theater. “The Tingler” would be no different and is perhaps one of his most remembered schemes.

​At one point in the film, the monster escapes into a crowded movie theater. As you see its silhouette crawl across the light in the projection booth, the screen quickly cuts to black. Vincent Price’s voice can then be heard telling the audience to start screaming. This is because, since the tingler is born out of fear, the relief of tension that screaming provides is the only defense against it. However, his instructions are not only for the audience in the film. For many of the theaters that “The Tingler” played in, seats were wired with electronic buzzers to give the sensation of movement underneath. During this scene, there’s a sly fourth wall break, and the audience watching the film is actually feeling the sensation that the creature they’ve been watching in the film is actually loose in their theater. The prompt to scream turns real and helps to engage the participatory nature from the audience.

Obviously, one cannot get this full treatment when watching the film in the comfort of your home (unless you get really creative). But it is yet another element that adds charm to the film and certainly flavors the historical context. Castle was a strong supporter of creating events around his films, and it’s easy to look back at his gimmicks and make comparisons to the 4D cinemas that try to emulate immersion through physical elements in the theater. Still, the somewhat self-serious nature of modern theaters that employ these tactics comes across as inherently silly. What is rather refreshing about Castle is that he understood his gimmicks were just that. He employed them for films that did not have any prestige and instead used them to make a lasting impression with his audience.

Unfortunately, Castle does not get mentioned that much these days when people discuss horror films from this time period. Even though there were some high profile Hollywood players that tried to pay homage to him. The studio Dark Castle, co-founded by Robert Zemeckis, was originally created with the intention of remaking William Castle’s movies. After 1999’s “House on Haunted Hill” and 2001’s “13 Ghosts”, there were rumors that “The Tingler” would be the next project. But the company moved onto other horror fare, including a remake of another Vincent Price classic “House of Wax.” While a part of me is glad “The Tingler” was spared a glossy Hollywood remake, that also kept it out of the public consciousness even more, lending its support to be in more niche circles.

Still, being niche isn’t all that bad, and the legacy of “The Tingler” has certainly made it endure these past six decades to become a bona fide cult classic. In all honesty, I do carry a lot of nostalgic memories for many films from this time period. At the same time, I recognize the tone they were going for and understand they play right into the fears that stoked its first-run audience. It’s interesting to see a horror film that makes fear a central element to its story, even if the science behind it is on the goofier side of the spectrum. This film not may only be widely celebrated, but it has an audience that has appreciated this oddity of the genre for sixty years. Here’s to another spine-tingling sixty more.