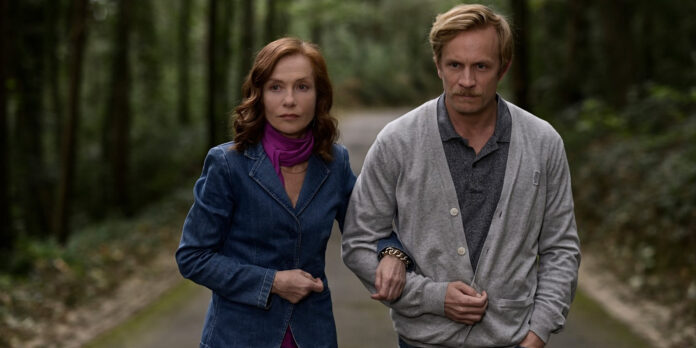 THE STORY – Three generations grappling with a life-changing experience during one day of a vacation in Sintra, Portugal, a historic town known for its dense gardens and fairy-tale villas and palaces.

​​​​​​​Ira Sachs’s “Frankie” begins with Isabelle Huppert’s title character setting up by a pool in the hotel she’s staying in; she throws her towel over a chair, tests the water, and takes off her robe and sunglasses. And then she takes her top off and dives in. When a young girl tells her other people in the hotel might take pictures, she replies, “That’s okay – I’m very photogenic!”

This perfectly insouciant humor flows freely from Huppert throughout “Frankie,” another low-key gem from writer-director Ira Sachs. Frankie is a movie star who is dealing with a recurrence of cancer. She had beaten it once, but now it’s back, and she has gathered her family – and her friend and one-time on-set hairstylist Irene – for a holiday in Sintra, Portugal. Her son is still hung up on an ex, her daughter is in an unhappy marriage, her adolescent granddaughter wants nothing to do with the vacation or her parents’ impending divorce, and Irene (whom Frankie has intended to set up with her son) has unexpectedly brought along a boyfriend who she may not be as in love with as he thinks.

Director and co-writer (with Mauricio Zacharias) Ira Sachs excels at detailing the sorts of familial tensions that characterize his latest film. As much fun as it is to see Huppert and Marisa Tomei (as Irene) bounce off each other comedically, what intrigues is watching the subtle shifts between the two of them as Frankie tells Irene the real reasons why she invited her to Sintra. Both actresses are masters of small gestures and subtle facial shifts that say a lot with a little, and this makes them a perfect match to Sachs’s style. What’s unsaid is often more important, and more powerful, than what is said, and that’s very much the case here. Tomei wrings lots of humor out of a scene where boyfriend Gary (Greg Kinnear) suggests they move in together, almost all of it relying on her vocal inflections and body language. It’s another fantastic performance in her ongoing relationship with Sachs.

While there are certainly universal themes at play here, “Frankie” feels more insular than Sachs’s previous work. None of the characters are as sympathetic as the leads of “Love Is Strange,” the child actors aren’t as natural as those in “Little Men,” and the subject matter not as gripping as “Keep The Lights On.” There’s not an easy way into the more emotional aspects of the story, which hampers the film’s impact. But the film seems more interested in simply observing these characters as they live their lives and deal with the little day-to-day troubles that we all recognize, even if we haven’t gone through them ourselves. And with a grounding force like Isabelle Huppert, it has no trouble remaining intriguing throughout.

Huppert is fantastic here. She strikes the perfect tonal balance between humor and melancholy, letting Frankie enjoy the plots she tries to set in motion between various members of her entourage even as she knows that she is living on borrowed time. She never once pushes too far, and it is because of the subtle, detailed character work she has done that the final, wordless scene plays as impactfully as it does. That final shot is as perfect as one could ask for, a perfect encapsulation of the film as a whole in one gorgeously staged and lit wide shot. All of these characters have been on this vacation together, but they’ve gone on separate journeys. Detailing how these things are two sides of the same coin is one of the film’s strongest points, and no one seems to be doing that in film today better than Ira Sachs.