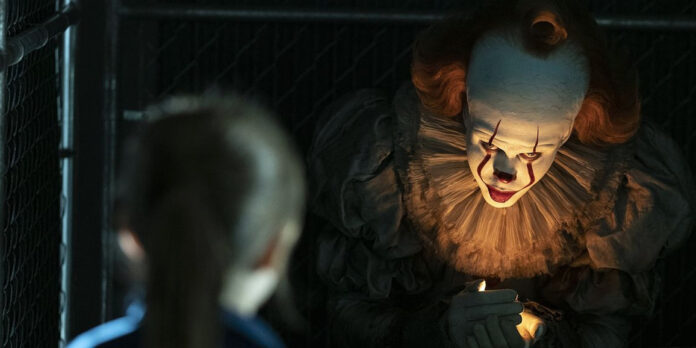 THE STORY – In the sleepy town of Derry, the evil clown Pennywise returns 27 years later to torment the grown-up members of the Losers’ Club, who have long since drifted apart from one another.
​
THE CAST – James McAvoy, Jessica Chastain, Bill Hader, Isaiah Mustafa, Jay Ryan, James Ransone, Andy Bean & Bill Skarsgård

​​​​“IT Chapter Two” is a big horror film. One might even go so far as to call, this second part coupled along with “Part One” from 2017, one giant epic on trauma and fear. It’s a rarity within the genre to receive a horror movie with this kind of scope, scale, and attention paid to the source material. That attention to the source material though has a few positives as it does negatives. For every nuanced character portrayal, there is an overlong sequence. For every fun set-piece, there is a gratuitous scene that could’ve been left in the cutting room floor either due to the film’s overall length or because of its problematic content. Nevertheless, this is the definitive on-screen version of Stephen King’s terrifying novel, for better or for worse.

It’s been 27 years since the evil shapeshifter known as It (Bill Skarsgård giving it his all as the horrifying Pennywise once again), terrorized the town of Derry Maine and the members of the losers club. Now, It has returned and Mike Hanlon (Isaiah Mustafa), who has never left the town, is calling back all of his childhood friends to finish what they started. Bill Denbrough (James McAvoy) is now a writer working in Hollywood (On the Warner Bros. lot nonetheless). Beverly Marsh (Jessica Chastain) is now a fashion designer who is in an abusive relationship with her husband, repeating the same circle of violence she experienced at the hands of her father at a young age. After years of being bullied for his weight, Ben Hanscom (Jay Ryan) is now a fit architect. Richie Tozier (Bill Hader) is a successful stand-up comedian (perfectly suited to Bill’s talents as he adds much levity to this nearly three-hour dark horror movie). And hypochondriac Eddie Kaspbrak (James Ransone) is of all things, a risk analyst for a major firm. They all must abandon their lives and return to the place of their childhood, where their memory of the past has disappeared and re-confront Pennywise intending to defeat the evil being known as It away once and for all.

Much has been said about the opening scene of “Chapter Two” and how hard it is to watch. A hate crime taken directly from Stephen Kong’s text, its presence sets an uncomfortable and terrifying mood that attempts to set up a bit of subtext for two of the major characters towards the end of movie but at almost three hours long, that connection gets lost and this very brutal scene loses its relevance in the process. The same can be said for the continued domestic violence that Beverley experiences even as she’s older. What’s most upsetting about these two particular early set-up scenes is that we never see any horrific violence being inflicted on any of the men in the losers club. It feels cheap and manipulative by director Muschietti despite its faithfulness to the novel and continuation of themes from the first film stemming from trauma, pain, bullying, shaming, and abuse. Why isn’t Ben dealing with the same continued traumas of his past? A now successful architect with a body that looks like it belongs in GQ, why doesn’t he receive a horrific scene that reminds him of his past and upsets the audience? There’s also an unnecessary side-plot involving Henry Bowers (Teach Grant), all grown up, having escaped from a mental institution and with a desire to kill the members of the losers club. I felt his character was over the top in “Part One,” and here it is pushed past the limit, rendering his character useless, with no bearing on the plot other than to annoy the audience, honor King’s book and pad out the runtime.

Believe me when I tell you, I want “Part Two” to earn its runtime. I’m a huge fan of long movies because I believe they have the ability to pack in a terrific amount of character work while also giving the audience their money’s worth. However, “It Chapter Two” doesn’t course correct issues that were already present in the first film and instead it doubles down on them. This inevitably makes “Part Two” a weaker film than “Part One” by default. However, taken as a whole, I believe that the entire story of “It” ultimately works.

“Chapter Two” continues the wonderful character work established in the first film by perfectly casting the right adult actors for each of their respective kid characters in the first film (who make appearances once again through various flashbacks). Bill Hader and Jessica Chastain are definitely the standouts here, though all of the adult actors have an ample amount of time to dig deep into their characters. Each of them receives their own side-quest of returning to their past and confronting It before they must all come together for one final climactic showdown with the demonic shapeshifter. While I appreciate this level of care which is taken to further establish each member of the losers club, some are highlighted more than others. Some are even more interesting than others. And all of them, add to this already long runtime, repeating the theme of confronting the trauma of their past, which becomes diluted with each passing character.

The craftsmanship of “Part Two” is equally as good as the first film (minus the editing), with eerily detailed practical sets, hideous and gruesome makeup, bone-chilling sound work and wonderfully creative visuals. Director Andy Muschietti obviously cares about these characters, Stephen King’s novel and the themes he wanted to touch on with both parts. While “Part One” can stand on its own as sort of a Rated-R “Stranger Things,” this second part is entirely devoted to “Part One.” They both can work together to tell one gigantic story but one is incapable of standing on its own if you were to watch the two out of sequence and it all comes back to that bloated runtime. Each act of this enormous three-act film feels overlong, with not much else to say that the first film didn’t already articulate to the audience. It never floats as well as the first film, rather it balloons to such a tremendous size that it threatens to pop. Billy’s character is always being told by people that they don’t like the ending to his book and I fear the same will be said about the entire story of this modern adaptation of “It.”