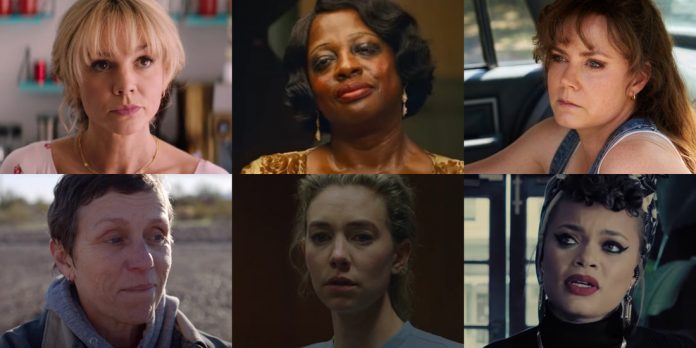 Welcome to awards season 2021. Now that the Golden Globe Awards and the Screen Actors Guild Awards have announced their official nominees, we have a real sense of how the legitimate Oscar race will play out based on hard evidence of precursors, rather than assumptions and critics associations. Since we have received SAG nominations in particular, in concert with the expanded acting categories at the Golden Globes, it is my contention that we have a clear insight into how each category will break down at the Academy Awards. This is part one of a series of posts analyzing the acting races’ state with the newly announced SAG and Golden Globe nominees.

First up is Best Actress. ​

Here is where I see the category standing right now…

Davis, Mulligan, McDormand, and Kirby all received both Golden Globe and SAG nominations. These four are widely seen as the safe consensus. Of the four safe contenders, Carey Mulligan’s profile has risen the most over the past few days. This is mostly due to the fact that the Golden Globes embraced the once-feared-to-be-controversial “Promising Young Woman” with as open arms as possible, nominating it for Best Picture Drama, Best Actress, Best Screenplay, and shockingly Best Director. That creates a legitimate claim to fame and the film will not be written off as an Internet-only sensation. In fact, Mulligan stands a good chance to win the Golden Globe now. She has never won before with the HFPA, the film is beloved, and Davis has a complicated relationship with the Globes in a less popular film with that constituency. Mulligan also stands a wicked chance at winning her second Best Actress BAFTA award for this performance, with “Promising Young Woman” being born out of British talent and rocking the BAFTA long-lists. Viola Davis could win the SAG and then the Oscar, and make history as the second Black American woman to win the Best Actress Oscar. We really have a two-woman race.

Frances McDormand, hot off her second Best Actress Oscar just three years ago, will likely take a backseat in the competition with a safe nomination. The person here who looks safe on the surface but for whom I suspect trouble is Vanessa Kirby. Although she received nominations from both organizations, the fact that her veteran co-star missed with both foreshadows something ominous. Without Burstyn hitting the marks with her, Kirby could end up being the Amy Adams in “Arrival” or Tilda Swinton in “We Need to Talk About Kevin” contender who hits the precursors but is edged out as other people emerge in the race. She is still in a strong position, but there is no doubt the buzz for “Pieces of a Woman” has been wilting for a long time.

This brings us to the last spot in the category. Right now, it looks to be between the SAG-nominated Amy Adams for “Hillbilly Elegy” and the Globes-nominated Andra Day for “The United States vs. Billie Holliday.” Each have compelling campaigns. Adams is an Academy mogul who has six nominations and has one of the baitiest performances of the year, and her SAG mention has risen despite the cultural controversy around the film. It’s also likely Adams’s co-star, Glenn Close, will win Best Supporting Actress at both SAG and Golden Globe, as well as the Oscar. Day has a classic narrative that feels like a Hollywood fairytale: a young popstar-turned-actress who proves she can really act in playing a real-life person. However, her film is not a level of quality that can usually compete for the Oscars.

​Day has been left off the shortlist for the BAFTA awards, while Adams has made it. I am rather confident Adams will become BAFTA-nominated. The BAFTA voters have proven to adore Adams over the past 15 years, rewarding her with seven nominations, two for films in which the Oscars ignored her, “Arrival” and “Big Eyes.” The BAFTAs also typically go for controversial films about American culture, i.e., “Three Billboards Outside Ebbing, Missouri,” “Green Book,” etc. Unless Day is able to break into the Critics Choice lineup for Best Actress, it will be difficult to see a world where Adams does not best her, with a SAG and BAFTA combination versus simply a Golden Globe nomination. Or perhaps, if Kirby does end up being the “big snub” of Oscar morning, they both make the cut.

There is room for a surprise contender by someone who has less of a profile in the race as of now to make an appearance at Critics Choice and BAFTA, or potentially beat out both Adams and Day in Best Actress:

For the time being, my formal prediction is going to be the following:

Though it may be controversial to leave Vanessa Kirby out at this moment in time, it is something that makes sense to me right now. Actors who are the sole representatives for their films are usually the first on the chopping block (think Adams, Thompson, Cotillard, Swinton, etc.), even if they are hitting with the groups they need to. If Kirby’s buzz becomes reinvigorated, or if Burstyn somehow makes a comeback in Best Supporting Actress, or if Adams misses BAFTA, or if “The United States vs. Billie Holliday” is truly a disaster upon release and is proven to be a Globes outlier, I will be swayed to move someone out and replace them with Kirby.