​”WHEN YOU FINISH SAVING THE WORLD” 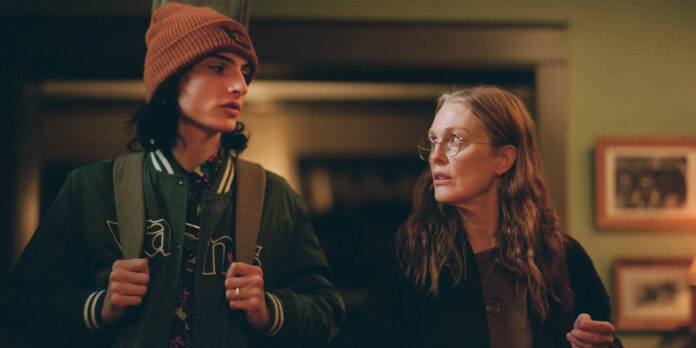 THE STORY – From his bedroom home studio, high school student Ziggy performs original folk-rock songs for an adoring online fan base. This concept mystifies his formal and uptight mother, Evelyn, who runs a shelter for survivors of domestic abuse. While Ziggy is busy trying to impress his socially engaged classmate Lila by making his music less bubblegum and more political, Evelyn meets Angie and her teen son, Kyle, when they seek refuge at her facility. She observes a bond between the two that she’s missing with her own son, and decides to take Kyle under her wing against her better instincts.​

​​​If I tried to guess what Jesse Eisenberg’s feature directorial and writing debut would be, a story about a mother and son who don’t have anything in common wouldn’t have made my list. But that surprise element is an admirable trait with the actor, who has starred in flicks about zombies, played the mastermind behind an iconic (highly questionable) social network platform, and been a comic book villain. No role is ever the same as the next (unless there’s a sequel involved), so maybe it is not too hard to believe he’d explore a mother-son relationship in “When You Finish Saving the World,” which had its world premiere at the 2022 Sundance Film Festival. While he nails the characters and writing in some areas, he misses the mark on the emotional aspects.

High schooler Ziggy (Finn Wolfhard) is a normal teenager, except he won’t let you forget that he has 20,000 fans around the world who wake up in the middle of the night just to hear him sing and give him money. Those bubblegum pop songs are about typical teenage stuff, and in his eyes, he’s giving people who live in poor countries and/or natural disaster zones a break from their reality. His mother, Evelyn (Julianne Moore), doesn’t understand him nor seems particularly interested in his budding fame. Unlike his bubbly persona, Evelyn’s tough and puts many people on edge. But somehow, she is good at helping survivors of domestic abuse, which she does through the shelter she runs.

Though they don’t want to admit that they have nothing in common, one thing is for sure: they’re both narcissists. That flaw comes into play when they both become obsessed with new people in their lives. When Ziggy hears his crush Lila (Alisha Boe) talking about politics, he makes it his mission to do the same, even though he has no idea what’s going on in the world. When a mother and her son Kyle (Billy Bryk) come to Evelyn’s shelter and sees the tight bond they have, she decides to take him under her wing, despite what he may want.

Eisenberg’s writing hits it out of the park when it comes to showing just how terrible and self-centered both Ziggy and Evelyn are. Everything they do comes with an agenda. When Ziggy realizes he can be political and bring in money, he thinks he’s nailed the whole “bringing awareness to the problems of the world” idea. But in reality, he’s continuing to exploit all those who watch him and doesn’t realize it until Lila spells it out for him. Evelyn seems to have good intentions with Kyle – wanting to introduce him to the possibility of going to college and getting a degree – but she never actually listens to what he wants. Even though their characters are some of the worst people you could meet, Moore and Wolfhard pull it off so well. Moore, who seems like a sweet woman off-camera, has a venomous side to her in this film and says genuinely hurtful things to her son regarding his music. Wolfhard captures that teenage desire to fit in and be part of the conversation without realizing what he truly wants.

Another MVP is Jay O. Sanders’ Roger, the patriarch. He’s not afraid to call out his narcissistic family members (who deserve it) or want peace and quiet at home, which he’s not getting but so deserves. He is the most relatable character. Emile Mosseri’s music is another standout that further shows the differences between Ziggy and Evelyn. The teen’s upbeat tunes are heavily contrasted with the dramatic classical music Evelyn religiously listens to in the car.

Other parts of the script, however, aren’t as strong. Going into this film, I thought this would be a story about finding familial connection and rekindling the love that bonded these two years ago. Instead, Ziggy and Evelyn are apart for most of the movie, which makes forming a bond with them, or even remotely rooting for them to settle their differences, impossible. Any conversation they have leads to more annoyance between them, which definitely shows the disconnect but doesn’t add any depth. When we do get that final moment when they both realize they should be better toward each other, it happens so quickly and moves awkwardly. It is clear what Eisenberg was going for, but he didn’t take his time to properly build up to those precious moments everyone wants in an ending.

Eisenberg might not have checked all of the boxes with “When You Finish Saving the World,” but it is a decent start to his career behind the camera. What is clear here is that Eisenberg has interesting stories to tell, and with how many people tuned in for this day one premiere, audiences are eager for them.

​"WHEN YOU FINISH SAVING THE WORLD"<b>THE GOOD -</b>Eisenberg's script and Moore and Wolfhard's performances perfectly capture the narcissistic aspects of the main characters. Jay O. Sanders adds a fun presence in the midst of all their chaos. The music stands out as a way to highlight the differences between Ziggy and Evelyn.<br><br> <b>THE BAD -</b>  There are not enough emotional moments to hook the audience in. The story moves too quickly at times, specifically in the end.<br><br> ​ <b>THE OSCAR PROSPECTS -</b> None<br><br> <b>​THE FINAL SCORE - </b>6/10