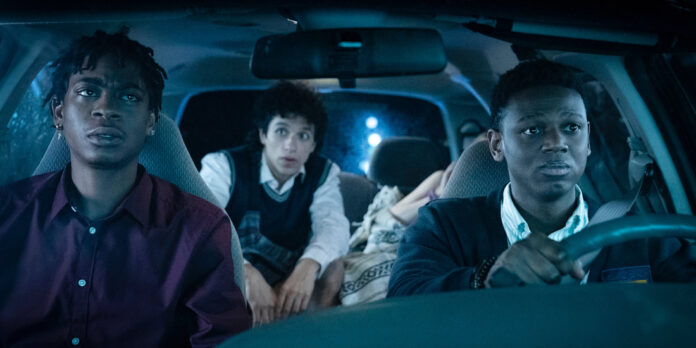 THE STORY – Straight-A college student Kunle and his laid-back best friend, Sean, are about to have the most epic night of their lives. Determined to be the first Black students to complete their school’s frat party legendary tour, the friends strap in for their ultimate assignment, Solo cups in hand. But a quick pit stop at home alters their plans when they find a white girl passed out on the living room floor. Faced with the risks of calling the police under life-threatening optics, Kunle, Sean, and their Latino roommate, Carlos, must find a way to de-escalate the situation before it’s too late.

​​There are plenty of moments that show the painfully accurate reality of our world in “Emergency,” but one is a decision our three protagonists have to make early on that sets the tone for the whole film. When Kunle (Donald Elise Watkins) and Sean (RJ Cyler) find a young, white woman passed out in their home, who their roommate Carlos (Sebastian Chacon) didn’t hear come in, they question what to do. Kunle suggests calling the police, which is what many others would likely do in this situation. Sean, on the other hand, tells him that’s not a risk they can take. First, no one would probably believe that they stumbled upon a woman, who appears to have been drugged, in their home. Second, the men are minorities – Kunle and Sean are Black, and Carlos is Latino – and calling the police could be a life-threatening situation. The luxury and privilege of making a simple 9-1-1 call doesn’t exist for our characters, and it’s just one of many stressful moments they have to face.

Carey Williams’ “Emergency,” which debuted at the Sundance Film Festival, takes characters, and viewers, on a hell of a journey when the three men try to help this mystery woman. While there’s plenty of humor that kicks off the story, K.D. Dávila’s script heads into nightmare territory for these young men and the people who are searching for their missing friend. The fears and truths depicted – race, police interactions, and what could happen to young women at parties – allow for necessary conversations to take place.

Before any of the craziness happens, straight-A college student Kunle and his laid-back best friend, Sean, are prepping for another type of crazy night. They want to become the first Black students to complete their school’s frat party legendary tour. Sean is much more amped about it than Kunle, who is more concerned about pleasing his parents and making sure his cultures for his thesis are stored at the proper temperature. These two are complete opposites, but their playful teasing and humor – Cyler with hilarious quips one after the other – make them a perfect match. When they head home before their legendary night gets started, everything turns upside down when they discover Emma (Maddie Nichols), later revealed to be a high schooler, lying on their floor. When they decide to forgo calling the police and drive her to the hospital themselves, obstacles keep getting in the way. The night also drives a wedge between the tight-knit roommates as Kunle and Carlos worry about Emma, while Sean only thinks about missing frat parties.

There may be exaggerated moments in “Emergency” – some of the decisions the men make aren’t the brightest, and the situations they find themselves are often comedic – but there are plenty of truths to be found. The group pulls into an off-campus neighborhood at one point when Emma, constantly in-between states of consciousness, says she needs to use the bathroom. As Kunle and Carlos attempt to take her to a spot in a field, Sean notices a white woman staring at him through the window. Later on, the woman and her husband come outside, threatening the group and accusing them of selling drugs, all while she’s filming the interaction on her phone. As they return to their home, a glaring “Black Lives Matter” sign on their front lawn, and the irony, is hard to miss. Emma’s sister, Maddie (Sabrina Carpenter), too, has a million thoughts run through her mind when she can’t find her sister at a frat party. And when she sees her sister getting into a mysterious van with people she doesn’t recognize, she can only assume the worst. Dávila masterfully folds in all of these moments that say so much about the world today and how unsafe it is.

But a powerful last act when the two groups come together will stay with viewers. Maddie is in full fight mode, trying to retrieve her sister, which is understandable, but she won’t listen or believe anything Kunle says. When he rightfully calls out her behavior as racist, she gets defensive. Even after that, she still has the gall to ask for his help when things get complicated for her sister. It all leads up to a showdown with the police, and everything freezes for Kunle, who comes face-to-face with what the men were trying to avoid from the start. Watkins pours every ounce of himself into it, leading to a powerful image that won’t easily be erased from viewers’ minds.

There are parts that didn’t entirely work in “Emergency,” mainly how it loses momentum at specific points. I also wish we got more of a backstory with our three heroes. The friendship between Kunle and Sean is beyond sweet, but since they’re so different from one another, I can’t help but wonder how they ever became friends. Perhaps that could serve as the basis for Williams’ next hit.