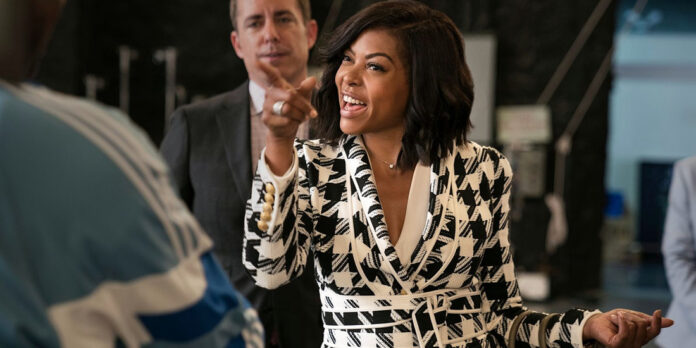 THE STORY – Passed up for a well-deserved promotion, sports agent Ali Davis wonders what else she needs to do to succeed in a man’s world. Hoping to find answers from a psychic, Ali drinks a weird concoction that suddenly allows her to hear what men are thinking. Using her newfound ability, Ali starts to turn the tables on her obnoxious male colleagues while racing to sign the next basketball superstar.
​
THE CAST – Taraji P. Henson, Aldis Hodge, Richard Roundtree, Wendi McLendon-Covey & Tracy Morgan

​​We’ve had a fair share of gender-swapped remakes in the past few years. There was 2016’s “Ghostbusters” with a star-studded cast and tomato-studded reviews (averaging 74% on Rotten Tomatoes). Last year, we had “Ocean’s 8” — again, a great cast, but lesser-than-great critique. Don’t get me wrong, the idea of an all-female led remake of a classic film seems like a great idea in theory. However, the way an idea looks on paper isn’t always how it turns out. With director Adam Shankman’s “What Men Want,” the cheeky remake of 2000’s “What Women Want,” is, unfortunately, not an exception.

Taraji P. Henson is Ali, a whiplash smart sports agent in Atlanta who’s good at her job and, supposedly, terrible at reading men. In Nancy Meyer’s “What Women Want,” it’s not hard to believe Mel Gibson’s Nick is the chauvinistic pig he portrays; in Shankman’s reboot, however, we see the men around Ali as multiple Nick Marshalls, yet are supposed to believe that Ali is the one who has some growing up to do. Granted, she’s cold – but as a female working in a “man’s” profession of athletics, you have to be.

After missing a well-deserved promotion to one of her younger male colleagues, Ali is determined to sign the No. 1 NBA draft pick Jamal (Shane Paul McGhie) and his helicopter dad, Joe Dolla (Tracy Morgan) to earn her place as the true winner. Her plans get off-track when she is given the skill to hear men’s thoughts after a bachelorette party gone-wrong and some strange psychedelic tea. Along the way, she meets Will (Aldis Hodge), a single-father with better intentions than most and a good heart.

The biggest problem with “What Men Want,” is that it’s a film poorly placed in a hyper-aware social climate of #MeToo campaigners and #ToxicFeminism complainers. Though Henson is a joy to watch and adds as much depth and dimension to Ali as she can, the poorly written script and an overarching theme that she needs to treat men better just doesn’t land. Other than being overly-competitive and somewhat selfish, Ali is a good daughter, a loyal friend, and a hard worker. With this in mind, “What Men Want,” sounds more like a plea for women to shut up and sit down, rather than to truly be better and more understanding of those around them.

However, there are definitely some funny moments – particularly during interactions between Ali and her gay assistant Brandon (Josh Brenner) who deserves his own film. Brenner holds his own alongside Henson and molds Brandon as an endearing and underestimated component to an otherwise stereotypical group of men.

While “What Men Want” may be better than its original, I’m still waiting for a gender-swapped remake that serves a purpose other than to make headlines.