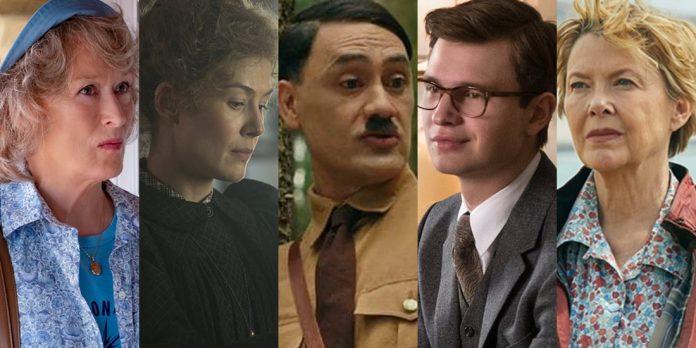 I have never attended a film festival before. I’ve always watched them from afar, interested in what is playing and what gets distribution afterward, fascinated by how the narrative about certain films shift between their festival premieres and when they are released to the public. This year, all that changes: I will be attending the Toronto International Film Festival for Next Best Picture. Naturally, I’ve been eagerly anticipating the festival lineup announcement, and on Tuesday, we got our first glance at what will be playing as TIFF announced this year’s Galas and Special Presentations. This is where you will generally find the most high-profile releases of the festival, the ones with glitzy red carpet premieres and the like. But even among this group, some titles fill me with excitement more than most. Now that I’ve finally calmed down and lived with these titles for a couple of days, here is a baker’s dozen of the ones I’m most looking forward to getting on my schedule.

​“A Beautiful Day In The Neighborhood”

Marielle Heller’s follow-up to her somehow under-rewarded “Can You Ever Forgive Me?” stars Tom Hanks as Fred Rogers, beloved children’s show host. “Mr. Rogers’ Neighborhood” was a formative part of my childhood (there’s a reason tigers are my favorite animals), and last year’s documentary “Won’t You Be My Neighbor?” hit me right in the feels. Hanks is ideal casting, and how exactly he figures into the story of Matthew Rhys’s journalist character is an interesting prospect, especially with Heller behind the screenplay. The recently-released trailer seems to confirm that this will be just as heart-warming as the documentary was, and who couldn’t use a shot of that kind of pure goodness during these dark, cynical times?

“Thoroughbreds” was one of the most intriguing debut films of the past several years, and Cory Finley managed a stacked cast for this follow up about the Roslyn High School larceny scandal from the early ‘00s: Hugh Jackman, Allison Janney, Ray Romano, Alex Wolff, Stephen Spinella, Annaleigh Ashford, Catherine Curtin, and Jeremy Shamos, among others. WOW.

John Crowley’s “Brooklyn” was my favorite film of 2015, and I’ve been eagerly anticipating his next film ever since. The Pulitzer-Prize winning novel on which this film is based is a beautiful read that seems like it could be right up Crowley’s alley. The film’s trailer showcases some typically beautiful Roger Deakins cinematography – this is the legend’s first film since winning the Oscar for his career-best work on “Blade Runner 2049.” And as if all that weren’t enough, this has an absolutely golden cast: Nicole Kidman, Jeffrey Wright, Luke Wilson, Finn Wolfhard, Sarah Paulson, Dennis O’Hare, and Ansel Elgort.

Michael Winterbottom? Directing a “scathing farce?” Starring his “The Trip” star Steve Coogan? As a fast-fashion retail billionaire? Throwing a lavish birthday party? Was this film made just for me? It sure sounds like it.

Another year, another chance for the Oscars to ignore a great performance from Annette Bening. This time, it’s opposite the great Bill Nighy in a drama about a long-time couple as they go through the process of breaking up. The film looks to be an adaptation of writer-director William Nicholson’s own play “The Retreat From Moscow,” which received Tony nominations for Best Play, Best Actress in a Play, and Best Featured Actor in a Play, so the pedigree is high.

Taika Waititi is one of the most unique voices working in film today, and this… well… to tell the truth, it still looks a bit iffy. Satire is difficult enough as it is, but a satire about Nazis? There are so many ways it could go wrong. However, Waititi has been on a hot streak, and this film is based on an acclaimed novel. And frankly, blind nationalism is something that could use a good satire right now. Plus, the teaser, released just after the TIFF announcement, looks fantastic. I just need to brace myself for the discourse.

Anything new from Steven Soderbergh – one of our greatest living directors – gets my automatic attention, but one with Meryl Streep in THAT outfit shoots to the TOP of my most-anticipated list. That the film is telling the story behind the infamous Panama Papers and is only 96 minutes long (most of the films announced this week are WELL over two hours), is just icing on the cake.

My family is one of seafarers. Growing up near the coast of Connecticut, we spent many a summer day out on the water and exploring the area lighthouses, which I’ve been fascinated with from a young age. So I’d probably be excited for this anyway, but a psychological thriller from the director of “The Witch” shot on 35mm black and white film starring Willem Dafoe and Robert Pattinson that won raves and the FIPRESCI Prize for the Directors’ Fortnight/Critics’ Week section at Cannes ticks so many of my boxes that I wish I were in my seat for this right now.

A new film from Pedro Almodóvar is always an event, and this one finds him re-teaming with his early muse Antonio Banderas (playing a version of the director himself) and more recent muse Penélope Cruz (who is always at her best when working with Almodóvar). Reviews from Cannes were rapturous, and Banderas won the Best Actor prize. Banderas has yet to even be nominated for an Oscar, so I’m very excited to see if this could be the film to finally get him that honor.

This biopic features Oscar nominee Rosamund Pike as legendary scientist Marie Curie, but what really excites me about this film is the fact that it’s directed by Marjane Satrapi. Satrapi’s first feature, the adaptation of her graphic novel “Persepolis”, is one of the best films of the ‘00s, but her last film, the Ryan Reynolds starring “The Voices,” was A MESS. “Radioactive” is also based on a graphic novel, so this could be a great film bound for Oscar glory… or it could be a disaster. I can’t wait to see which one it ends up being.

“The Sky Is Pink”

All I really needed to see was “starring Priyanka Chopra”, but the plot of this Indian film sounds potentially moving: A biographical film from director Shonali Bose, it tracks the story of a relationship as told by the couple’s recently-deceased daughter. Chopra says that she connected with the film from the first she heard about it. As a big fan of Chopra’s Bollywood films, I’m very much looking forward to seeing her on the big screen again.

I trust I only need to say five words to convince you of my sky-high interest in this one: Jonathan Pryce vs. Anthony Hopkins. But just in case that wasn’t enough, here are another two: Fernando Meirelles. The director of “City of God” and “The Constant Gardener” hasn’t done anything up to the standard of those two films since, but those two films alone are enough to make my ears prick up whenever his name is mentioned.