What Did We Learn From The 75th Golden Globe Awards? 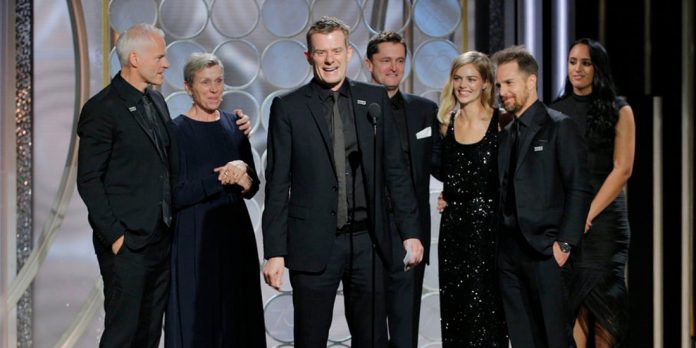 The Hollywood Foreign Press Association have handed out their annual Golden Globe awards to films, television shows, and artists. Though these awards have no direct effect on the Academy Awards – no one who votes for the Golden Globes also votes for the Oscars – they do serve the award season. Most would argue that they are meaningless and merely ego-boosting publicity stunts. But the way the Golden Globes function is that they provide a venue for frontrunners to build momentum heading into the guild awards or for films to gain attention that were otherwise being ignored. With undetectable frontrunners in the Best Picture and Best Actress categories prior to the ceremony, the Golden Globes may have shined a light on a potential direction the rest of the season could head in.

Does this mean “Three Billboards Outside of Ebbing Missouri” will go on to become the Best Picture frontrunner at the Oscars? Not exactly. The film is still polarizing and likely will not hold up well under the preferential system the Academy uses to decide Best Picture. If the Academy voted using a plurality system, then sure, this would give the film a good lead. These Golden Globe wins do give a boost to “Three Billboards Outside of Ebbing Missouri” as having a bigger presence than it did before. It now has more credibility to become the frontrunner in Best Actress (Frances McDormand), Best Supporting Actor (Sam Rockwell), and Best Original Screenplay.

While I’m hesitant to call “Three Billboards Outside of Ebbing Missouri” the Best Picture frontrunner after the Golden Globes, I am ready to say Frances McDormand is ahead in the Best Actress race. The film itself winning major Best Picture/Best Film awards creates a compelling case and a strong safety net for its lead actress’s pursuit of winning Best Actress. McDormand’s win at the Globes is resounding by itself, too; beating out Meryl Streep and Sally Hawkins says something, considering those performances more suited for the Hollywood Foreign Press’ tastes. Combined with her rousing and blunt speech, McDormand benefited most from her film’s triumph at the Globes. As long as she can keep going in the race and win a few more awards, including SAG, the most important for winning an acting Oscar, she’s likely our frontrunner.

​Another important facet of the Golden Globes is, thus far, pundits and awards fans have been analyzing the race with only the influence of critics association awards. While they have their time, place, and importance as well, the Golden Globes pop the critic’s bubble and tease out a more realistic outlook for the categories and competition as a televised award show. The Golden Globes may not technically be “industry awards,” but having the public, televised platform is a vital ingredient in why they matter. Some older pundits refer to the Golden Globes as “tryouts” for the Oscars, as though Academy members take notes on how certain artists accept speeches and how the public reacts to the way certain films are rewarded.

The winning performances are undeniably more actor-friendly and more overt in style, both requiring somewhat a transformation, whereas Dafoe and Metcalf are rooted more in the real world and natural, subtle acting. Industry awards and televised award shows typically go for the louder and more explosive performances, especially in the supporting categories. Therefore, Janney and Rockwell could overtake these supporting races and their winning at the Globes was the beginning of their ride as serious contenders for the Oscar wins this season. (Rockwell has the luck and convenience of being in a film that everyone has seen or is going to see, the film that’s energizing the conversation, especially after the Golden Globes.)

The Golden Globes also confirmed what most pundits were believing to be true too. The widely-loved “Lady Bird” snatched Best Picture Comedy/Musical and Best Actress Comedy/Musical for Saoirse Ronan, as expected. Though Christopher Nolan held the assumed frontrunner position for months in Best Director for “Dunkirk,” thinking has shifted over the past month, where many began believing Guillermo del Toro was sneaking up and emerging strongly in the category. Del Toro did, in fact, win, setting up “The Shape of Water” as competitive in the above-the-line categories, as well as below-the-line categories, as shown by Alexandre Desplat’s win for Best Original Score. Neither was exactly surprising nor were the results of the Best Actor races. James Franco prevailed for “The Disaster Artist,” maintaining his solid position in the Best Actor race. And even though Timothee Chalamet was the hands-down favorite for critics for his turn in “Call Me By Your Name,” he was unable to overtake Gary Oldman’s towering work in “Darkest Hour” now that we’ve transitioned to televised awards.

While it is a fact that the Golden Globes have only implicit impact, at best on the Oscar race, this year’s awards may have helped frontrunners come to the surface, redirect thinking from the way of critics to that of public/televised/industry voting, and confirm suspicions many pundits have had about more obvious categories in the race.